The right-wing agenda of the exorcism movie 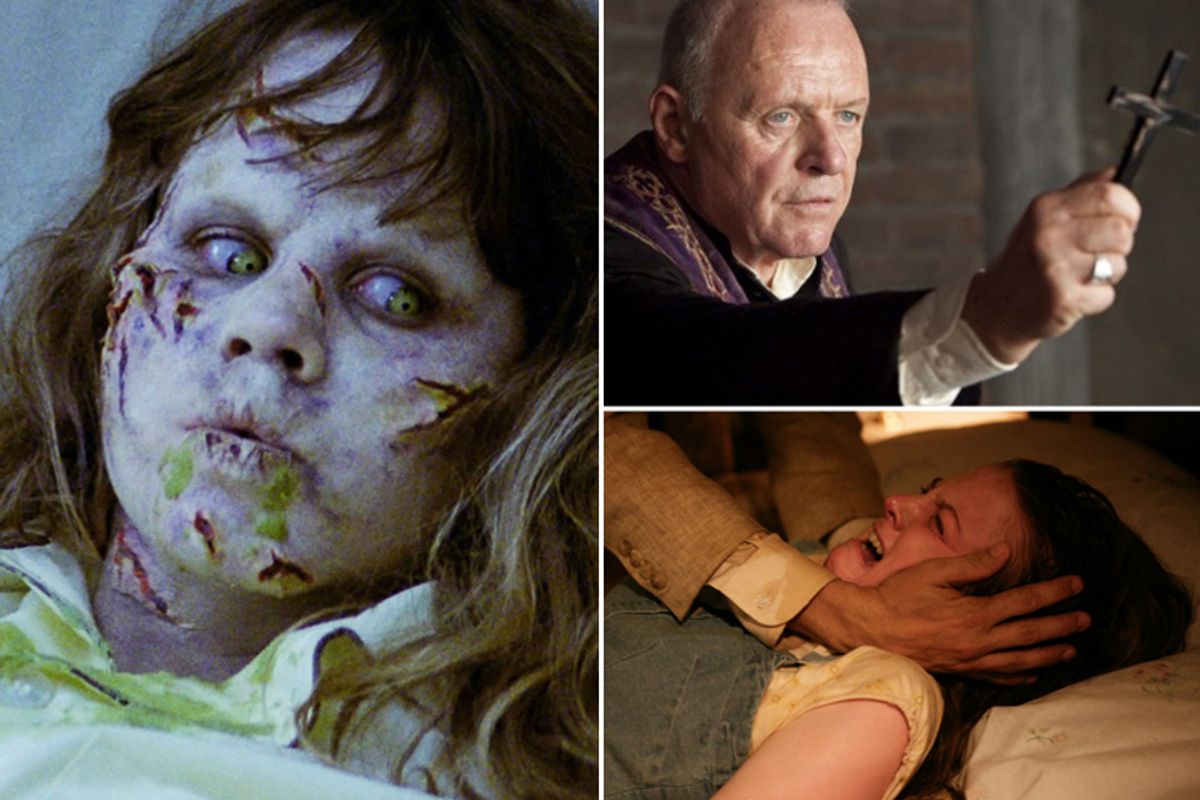 Clockwise from left: "The Exorcist," "The Rite" and "The Last Exorcism"
--

The aged priest, sweating in his elaborate vestments, leans over the pregnant woman kneeling on the floor, shouting scripture in Latin and dousing her with holy water. As she begins to hiss and writhe violently on the floor, the priest calls to his assistant to restrain her -- "And no matter what, do not listen to what the demon tells you!" After an incredible struggle, the girl has been subdued, and her eyes have rolled back into their sockets. She politely smoothes out her skirt and says, sweetly, "Grazie, padre."

In the wake of last summer's "The Last Exorcism," which grossed 30 times its budget, and the announcement that the Discovery Channel will soon be launching an exorcism reality show, comes another addition to the heroic catalog of American exorcism films, "The Rite." It tells the story of a young American seminary student who is sent to Rome to study at the new Vatican school of exorcism. A skeptic, he soon becomes the pupil of a seasoned exorcist renowned for his unorthodox methods (and played by a flamboyant Anthony Hopkins). As its press campaign breathlessly tells us, there are more exorcisms being performed today than ever before. Indeed, the exorcism genre has become ingrained in our pop culture over the last few decades, and is currently experiencing a real resurgence.

The exorcism movie is the most all-American of "spiritual" films, reducing complex religious beliefs to something more palatable: a take-charge action adventure with clear, targeted results. Much like the Roman Catholic Church, this brand of Hollywood horror frames evil as a diagnosable disease to be cured through extreme treatment, and its spiritual discussion rarely goes beyond the black-and-white "Is there a devil, or isn't there?" It's a clear, explicit test of faith in which there's finally no room for doubt -- unlike in everyday experience of spirituality. The genre has a familiar cast of characters, conflicts and a specific message about the nature of evil. Is also a genre with a remarkably conservative slant -- a tradition that dates back across the last 70 years.

1943's "I Walked With a Zombie, " by one of the great early voices of American horror, Jacques Tourneur, laid the groundwork for the subgenre. While by strict definition a zombie film, it plays out as a story of possession: no flesh-eating murderers here, simply a beautiful white woman who's been cursed by voodoo. (Warning: Good-looking young women are apparently more susceptible to possession than the rest of the population.) Betsy, a young Canadian nurse, moves to a Caribbean island to work for the Holland family at their plantation estate, only to discover that the mistress of the house, Jessica, is in a catatonic state and can do little more than wander the halls at night in attractive, white silk nightgowns.

While the family doctor dismisses Jessica's condition as a reaction to tropical fever, the native housemaid tells Betsy to take her to a voodoo priest -- for one of cinema's first attempts at exorcism. While the voodoo priest proves to be a fraud, here "Zombie" introduces another signature element of the exorcism film, the search for hard, physical proof of possession: The natives test Jessica by cutting her arm, and find that she does not bleed. Ultimately, as she witnesses Jessica's tragic end, Betsy loses her faith in medicine and is forced to accept the existence of inexplicable powers in the universe. The skeptic is transformed into a believer -- a trajectory to be repeated in almost every exorcism movie since.

1973's "The Exorcist" brought voodoo home to the United States, straight to our capital. The film included a number of familiar figures: the Possessed, a good layperson in the grip of evil (Regan, our innocent girl in need of an exorcism); the skeptic who must become a believer (also a layperson, Regan's mother); the believer, a senior priest who can no longer go it alone (Father Merrin); and finally the hero, often a junior priest (Father Damien Karras), who must convert his wavering belief into full-fledged faith by the film's end. The priest never interprets, never explains -- he saves. In most exorcism films, the victim's house comes under the religious equivalent of martial law -- but who cares, as long as there are results. This often comes at great sacrifice (in this case, Karras invites the demon into his own body and then takes his life), but in the end, faith has been legitimated for the audience. In this sense, the exorcism film is profoundly conservative, and terrific propaganda for the church. The message is clear: when evil comes knocking, you'd better have a priest on speed-dial.

2005's "The Exorcism of Emily Rose" managed to rope science into an argument in support of faith. This is a particularly twist, given it was based on the true story of Anneliese Michel, a young German woman, possibly epileptic, who died from repeated exorcisms shortly after the success of "The Exorcist." In a pivotal courtroom scene, a witness claims that the anti-psychotic drug Emily was prescribed worked against the brain activity "the exorcism experience" (as it's here more palatably referred to) actually triggers. "Emily Rose" enlists science just enough to make the skeptics in the audience feel a bit more comfortable, while ultimately giving us the result the genre dictates. The ruling (guilty but time served) is on the side of faith. The accused exorcist walks free. Even 2010's "The Last Exorcism" with its initially humorous, faux-documentary approach inevitably brings its reluctant Southern evangelical preacher, Reverend Cotton Marcus, closer and closer to a true test of faith. As he says early in the film, before the communion wafer hits the fan, "If you believe in God, you have to believe in the devil." Ultimately, the preacher, having seen evidence of evil, is truly compelled to fight it, leading him, in the film's ambiguous, grim ending, to walk towards an inferno, crucifix raised, likely never to be seen again.

"The Rite," meanwhile, is a return to the genre's conservative heart. Unlike Marcus, the young clergy of "The Rite" are champing at the bit to join the Vatican's new exorcism school. With the training camp at its center, the film frames possession as a terrorist threat: The demons can strike at any time, and you'd better be prepared. The movie itself, based on the experiences of an American priest who studied the craft at Rome's Regina Apostolorum Seminary, brings a whole new level of methodology to the genre: The hero Michael, a skeptical American seminary student, is given lessons (complete with gory, crime-scene slide shows) in how to diagnose the symptoms.

There is footage of a possessed woman who survived for eight weeks without food or water, and a man whose jaw "spontaneously dislocated while being read the Lord's Prayer." But our young priest, who's not so sure he believes in the devil, is sent for some one-on-one tutoring with Father Lucas, a scenery-chewing Anthony Hopkins as a Jesuit who's performed over 1,000 exorcisms. Lucas is at first charmingly irreverent: He actually takes a cell phone call during the exorcism of a teenage woman, and admonishes a hard-to-impress Michael with "What'd you expect? Spinning heads? Pea soup?" The viewer may sympathize with his frustration: Even after witnessing the woman spit up three crucifixion-size steel nails, Michael is just not convinced. But Lucas argues: "Choosing not to believe in the devil won't protect you from him.

The inverse is true in the exorcism film: Perversely enough, to believe in the devil is the key to salvation. When the senior priest himself becomes possessed (the only interesting move in "The Rite"), Michael calls out to him, "I believe in the devil, and so I believe in God!" This recalls the words of Marcus, and of Emily Rose as well, who writes in a letter to her priest shortly before her death, "People say that God is dead. But how can they think that if I show them the devil?" Hollywood is best equipped to deal with spirituality through its darker side -- that's the marketable stuff of horror. It's also the stuff of conservative America: All we need is for the hero to embrace his faith, and we have won. Although evil cannot ever be eradicated from the world, without it, Good cannot exist. And neither can the church.

Alex Mar is a freelance writer whose work has appeared in Salon, Slate and New York Magazine. Her first film, "American Mystic," will be released this year.