The discovery of my father's gun

I'm terrified of weapons. But after my dad died, I realized what a dark presence they've been in my family 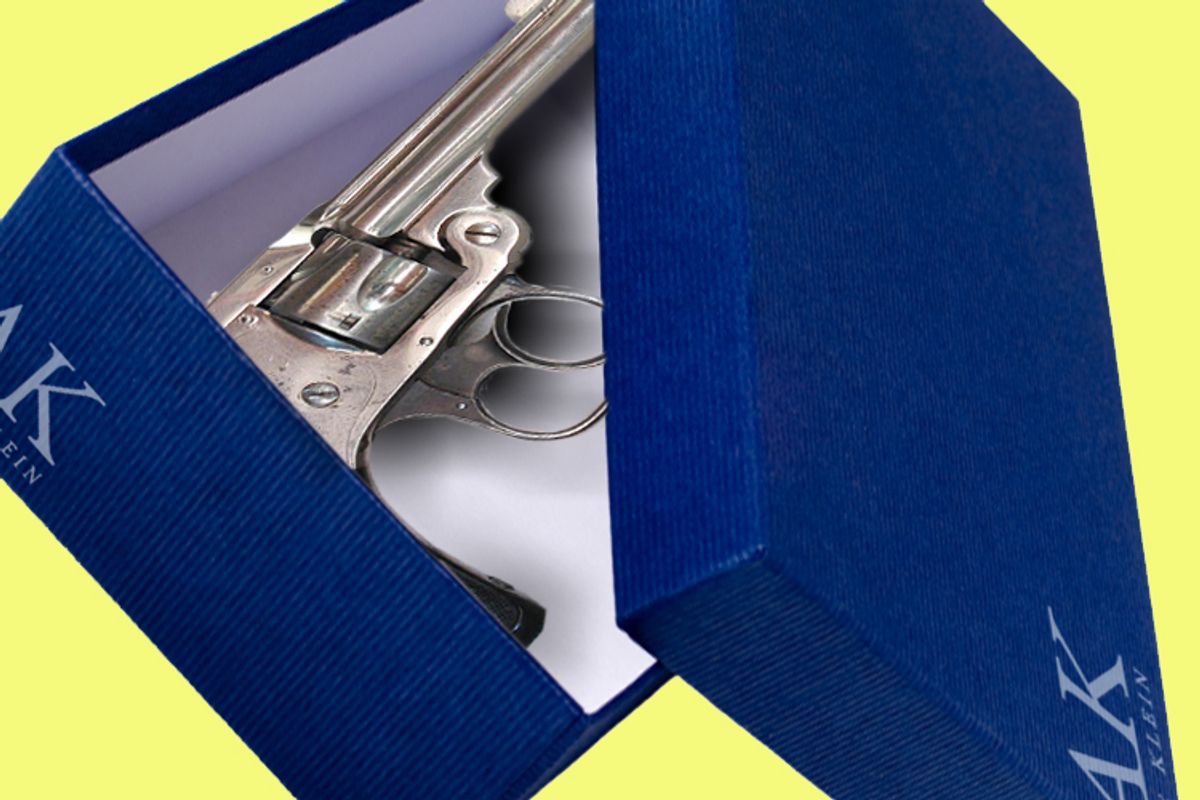 My mother and I are having dinner with a few of my father Paul's cousins when she says, "Did you know Paul had a gun?" A vodka on ice sits in front of her, and a pan-fried branzino. She favors the vodka.

"Not long after we moved to D.C.," my mother says, "there were riots. Paul was nervous. So when he was in New Mexico, he went to Uncle Jack's secondhand store and bought a gun."

"Did he have a permit for the gun?" asks Cousin Don, who looks like a psychologist.

"Of course he didn't," says his brother Mark, who actually is a psychologist.

"Of course he didn't," confirms my mother. "I bring the Anne Klein shoebox into the police station, right up to the bulletproof glass, and one of the cops says, 'No one here wears that size.'"

Everyone laughs. My mother smiles and drinks.

All I can think about is my Uncle Izzy, and how, on the night my father died, I finally found out what had happened to him.

Izzy, my father's uncle and favorite relative, lived by himself in a house in Albuquerque, N.M., with pictures of his late wife smiling down off the walls. He dealt in rare books; he whittled animals; he grew tomatoes in the backyard, and murmured to the hummingbirds that continued to visit his garden long after they had vanished from the rest of the neighborhood.

My sophomore year of college, Izzy died. My father told me that he had been diagnosed with emphysema, and, knowing he had a painful road ahead of him, he had decided to take a shortcut. I envisioned a scene where he lay in a bed surrounded by his sons, granddaughters and the twin great-granddaughters that had just come squalling into this world. Someone said something tearful, someone read some poetry, someone turned up the morphine, and Uncle Izzy went peacefully to his rest.

For 10 years, that was what I believed.

My mother sips and continues. "Of course the police want to see it, so I unwrap the duct tape and open the shoebox. It's the first time I've seen the gun in 25 years -- it's a .32 caliber Smith & Wesson, and it's pretty. The police think so, too. One of them searches on eBay and discovers a similar gun going for $500. He also confirms that I don't have a permit for it. I tell him that my son Judah warned me I'd probably get arrested for coming in here with a gun and no permit, and he made sure I had a speech prepared: 'This gun is my husband's, I didn't realize he didn't have a permit for it, I'm so sorry, and he just died. Please don't take me in.'"

"The cop asks for Judah's number. When Judah picks up, the cop says, 'Hello, son. We've got your mother here, and a gun she has no permit for.' Judah immediately starts explaining at a mile-a-minute: the gun was my dad's, my mom didn't realize there wasn't a permit, she's so sorry, and my dad just died. And the cop says, 'Yeah, yeah, that's the story she's telling too.'"

More laughter. "The cop was really cool," she says.

Cousin Don takes advantage of a pause while my mother drinks to say, "I have a gun."

Cousin Don says, "Sure. From Uncle Jack's secondhand store. But I couldn't hit a bear if it were coming straight at me."

My father wasn't supposed to die. He had fended off potentially fatal diseases -- skin cancer, a minor heart attack and, most seriously, colorectal cancer -- as well as the torments of affluence and indolence that could have killed him by degrees: obesity, pre-diabetes, gout.

His father had died at 70, and my father never expected to live longer than that. But of course my father could -- that is what America is all about. Besides, my father had more money, a health-conscious wife and excellent D.C. doctors.

The autumn that my father was 69 years old, he and my mother went to South Africa and Botswana. They saw elephants, lions, a thousand kinds of birds and insects that gave my father particular joy, as well as long-lost family members living in Johannesburg. Just as they were about to leave, my father, who had been suffering from jaundice and lack of energy, tripped over a paving stone and injured several ribs.

An X-ray back in the states told him what he had guessed, and then some. There was a mass in his pancreas.

We were optimistic about his chances of survival at first. It was a mass but probably not a tumor. It was a tumor but probably not malignant. It was malignant but it was small and easily removed. It wasn't easily removed, but it could be shrunk with chemo and radiation. It couldn't be shrunk with chemo and radiation, but it could be kept from spreading.

Nine months after the fall in South Africa, someone first used the word "hospice." I didn't know what it meant. That was an amazing, glowing kind of innocence, better than virginity and more painful to lose.

My father began to lose his mind -- to pain, to morphine, and then to what I can only imagine was hallucinatory despair. He called for his mother and fought against my mother. Once, when my brother Adam, Mom, and I were trying to rearrange him in his bed so that he wouldn't fall out, he stopped flailing his arms and used his teeth.

Soon after that, exhausted by caring for my father alone, my mother made the call.

The hospice center was half an hour away in the suburbs and, despite its ominous, "Hotel California"-like qualities, relatively pleasant. My father dealt more calmly with the nurses that he had with my mother. At one point, when one asked him who the president was, he roused himself to make her laugh by replying, "Gorbachev."

For three days, family members, neighbors, friends and the rabbi trooped through to say goodbye to the desiccated but still breathing body. On the night that everyone understood would be the last, we played music, read from Isaiah, and told stories. We were in an agony that had gone on for so long we barely felt it anymore. Somebody brought up Uncle Izzy.

"At least Uncle Izzy got this too," I said. "At least he got to have his family around him to say goodbye to before they turned up the morphine."

Everyone stared at me.

"No," said Adam. "He shot himself in the head in his living room. One of his sons found him."

I stared at Adam, who didn't seem to be lying. But that was ridiculous, and I said so. My gentle, animal-carving, poetry-reading Uncle Izzy could not have blown his head off and left the mess for some relative to find. I looked from face to face around the room; everyone seemed uncomfortable, but no one denied it. Was I an idiot? Was I ever actually lied to? I couldn't remember, and that didn't keep the fury from building.

"It was that frontier thing," Adam went on. "He lived in New Mexico, you know. He knew he had to go. He wanted to do it his way."

And he had a gun?

Anger had created a separate body inside my body, one made entirely of burning. I didn't know whether I was more embarrassed at having been naïve or upset at finding out the truth. I left the room and went to one of the parlor armchairs, where I curled up with one of the many tissue boxes the hospice tactfully provided. Eventually, I went to a friend's house five minutes away to take a nap.

"I'll call if anything happens," my brother Judah told me.

An hour later a call woke me up to say that it was all over. At that point I realized that, in my shock, I missed my chance. I had left my father's room without remembering to look back and say goodbye.

"Did you sell the gun on eBay?" Cousin Mark's wife asks my mother.

"No," says my mother. "The cops suggest I take it to Herman's Gun Shop in Rockville. I walk in with my Anne Klein shoebox and say, 'I have a gun.' The guy behind the counter says, 'Don't shoot!'

"He's really nice and likes the gun, though he says I have to get a permit before we'll be able to sell it. The upshot," she concludes, "is I still have it if anyone would like to see it."

It's in the car. In the Anne Klein shoebox.

Everyone looks impressed and my mother is pleased. She lifts her glass, shuffling the ice cubes within, and asks the waitress for another.

My mother showed my father's gun to my brothers and me when we came home to pick out a headstone. We sat in a friend's living room and took turns aiming at different objets d'art. This was my first time holding a gun. Even when I did a week of Israeli army training, I refused to. I was a vegetarian about to spend four years at a Quaker college. Why did I have to shoot an assault rifle?

As I considered the Smith & Wesson from Uncle Jack's secondhand store, I wondered if, when my father got really sick, he remembered about this gun, hidden away on my mother's shelf. Did he think about asking for it under some pretext that wouldn't have aroused Mom's suspicions? Did he want to spare her that, or us, or himself? Was the frontier way not his way, or did he hold out hope, even until the very end?

I looked through the sight at one of the room's tasteful vases. Pow, I thought, and I pulled the trigger. It put up much more resistance than I expected. Good, I thought. You should have to mean it.

Ester Bloom's writing has appeared in the Apple Valley Review, Conte: A Journal of Narrative Poetry, The Morning News, PANK, Bundle, Nerve.com, and Salon.com, and is collected on her website, esterbloom.com. She is currently at work on a book of comic essays entitled "Never Marry a Short Woman."