Why is America so afraid? 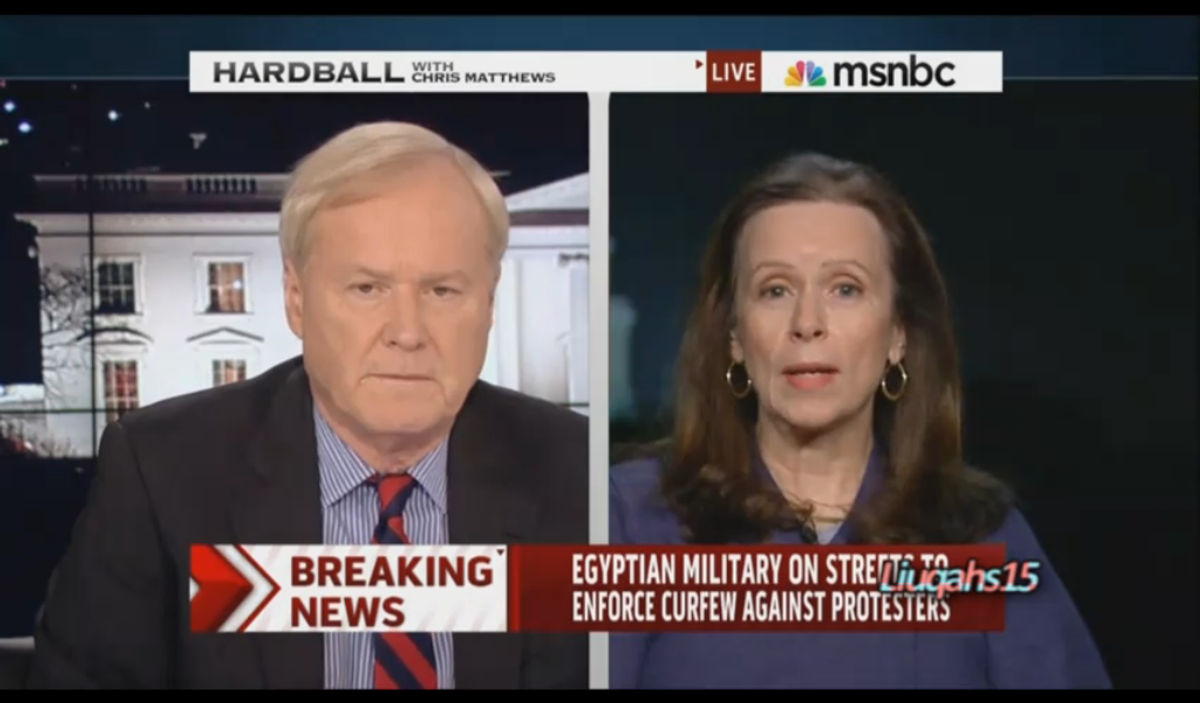 This originally appeared at MondoWeiss

I'm as thrilled as anyone by what I see in the Cairo streets, but when I turn on American television I see only grim faces. Robert Gibbs looked frightened during his delayed press briefing yesterday afternoon; he didn't know what to say. Obama's comments last night were equivocal and opaque: I'm with Mubarak, for now. This is his 9/11 -- the day Arabs blindsided a president.

I thought this is what he wanted for the Arab world: democracy! But the market dropped, and the cable shows are filled with mistrust of the Arab street. Our talking heads can't stop talking about the Islamists. Chris Matthews cried out against the Muslim Brotherhood and shouted, Who is our guy here? -- as if the U.S. can play a hand on the streets. While his guest Marc Ginsberg, a former ambassador to Morocco whose work seems to be dedicated to finding the few good Arabs out there, said that forces outside Egypt are funding the revolt -- a grotesque statement, given the homegrown flavor of everything we have seen in the streets; and when Matthews pressed him, Ginsberg said, Hamas... Iran.

Matthews's other interpreter was Howard Fineman. Why aren't there more Arab-Americans on U.S. television? I give PBS credit for gathering Mary-Jane Deeb and Samer Shehata (along with the inevitable Steven Cook of CFR) to speak of the real political demands of the protesters (and not galloping Islamism!)-- but when CNN aired Mona Eltahawy saying that the protesters are not violent, the moderator stomped on her and said, what about those burning vehicles?

As if eastern Europe changed without similar destruction.

So racism against Arabs is shutting down the American mind once again. And all my friends must turn to Al Jazeera English to get the soul of the story: that these events are electrifying to Arabs everywhere, a heroic mobilization. And not only to Arabs. When ElBaradei says, I salute the youth for overturning a pharaonic power, lovers of human freedom everywhere must be thrilled. We are seeing a dictator dissolve before our eyes. These are the events we cherished in history books; let us embrace the Egyptian movement.

Why is America so afraid?

Because we are seeing a giant leap in Arab power, in which the people of the largest Arab nation demand that they be allowed to fulfill their potential. This change portends a huge shift in the balance of power in the region. For the U.S. has played only a negative role in the Egyptian advance, supplying the teargas, and it seems inevitable that Egypt will cease to be a client state to the U.S. And thereby threaten the order of the last 30 years.

Whatever government replaces the current one in Egypt, it will not serve American interests, which have been largely defined by Israel, the American-Israeli "imperium," as Helena Cobban put it. Since the 1970s (as Joel Beinin shows here), Egypt has been the lynchpin of a US strategy of supporting Israel. The special relationship with Israel has steered our foreign policy, encouraged the destruction and occupation of Iraq, and even fed American Islamophobia. Key to preserving this order has been our ironclad support for the Arab dictatorships in Jordan, Egypt, Tunisia and elsewhere-- by providing the policy with a "moderate Arab" seal. Hey Egypt was a bulwark against the Islamists, and Egypt was crucial to the peace process, as all the correspondents tell us on American TV.

The danger to America and Israel is that the Egyptian revolution will destroy this false choice of secular dictator-or-crazy Islamists by showing that Arabs are smart articulate people who can handle real democracy if they get to make it themselves. And when they get it, they are likely to strip the mask off the peace process. On Al Jazeera English, there is much talk about the Palestinians. One commentator said that the "humiliation" of the Palestinians is feeding the Egyptian revolt. (I will never forget how Egyptian construction workers put down their tools to stand and applaud the Code Pink buses as we left El Arish for Gaza in June 2009.) And in his beautiful statement calling on Mubarak to serve his country by leaving, ElBaradei said that a government that heeds the people's will would turn soon to the Palestinian issue.

This is the great fear, in Israel and in Washington, too: that revolution in Egypt will reveal the despotism of the existing order for the Palestinian people, who have seen their rights and properties and security and water taken from them during the peace process that Egypt has helped sustain.

The grimness on the faces of American Establishment figures reflects the greatest threat to authority, the crumbling of an existing order. Support for Israel has defined order in this region for decades and steered our support for dictators. Ever since Truman defied the State Department in 1947-48, we have been committed to maintaining a Jewish state in the Middle East despite local opposition. This has required great American expenditure, and probably cost Bobby Kennedy his life, but it has been an order. That order has required lip service to Arab democracy, but hey, Mubarak is better than those Islamists.

Now that true Arab democracy is finally coming on stage, that moral structure falls apart. I say morals, because support for Israel has always had a moral rationale. The American establishment felt good about our support for Israel because it seemed like the right thing: We had helped to solve the age-old Jewish Question of Europe. We had ended Jewish persecution. Israel was the answer to Never again! If you doubt that this is the moral calculus of our policy, step into the Center for Jewish History in New York this month. There must be four or five exhibits that touch on Jewish persecution in the Middle East and Europe. The destruction of Italian Jews. The destruction of Berlin businesses that provided the finest linens, photography, interiors... The persecution of Moroccan Jews. It never ends, along with an exhibit dedicated to the "miracle" of Israel's creation with American Jewish support.

Thus the Jewish community has hunkered down in an anachronistic identity-- secure in the completely-contradictory knowledge that the American power structure will support Israel.

All this is changing in Egypt. An Arab liberation story is forcing itself into world consciousness. "The vast, vast majority of protesters are peaceful people, mostly middle class, and they are showing great solidarity. People are still defending the Egyptian Museum," Issandr El-Amrani reports, inspiringly. There is bound to be great suffering in Egypt, we pray for a smooth transition, but if the Egyptians are only left to handle their own affairs, who doubts that the polity that will emerge from this chaos will be more responsive to human rights, and will strike a blow against the fetters of anti-Arab racism that have chained the American mind.

Philip Weiss is the co-editor of " The Goldstone Report: The Legacy of the Landmark Investigation of the Gaza Conflict ."