"Endgame": The genius and madness of Bobby Fischer

How did one of the greatest chess players of all time end up a paranoid, hate-filled old man? 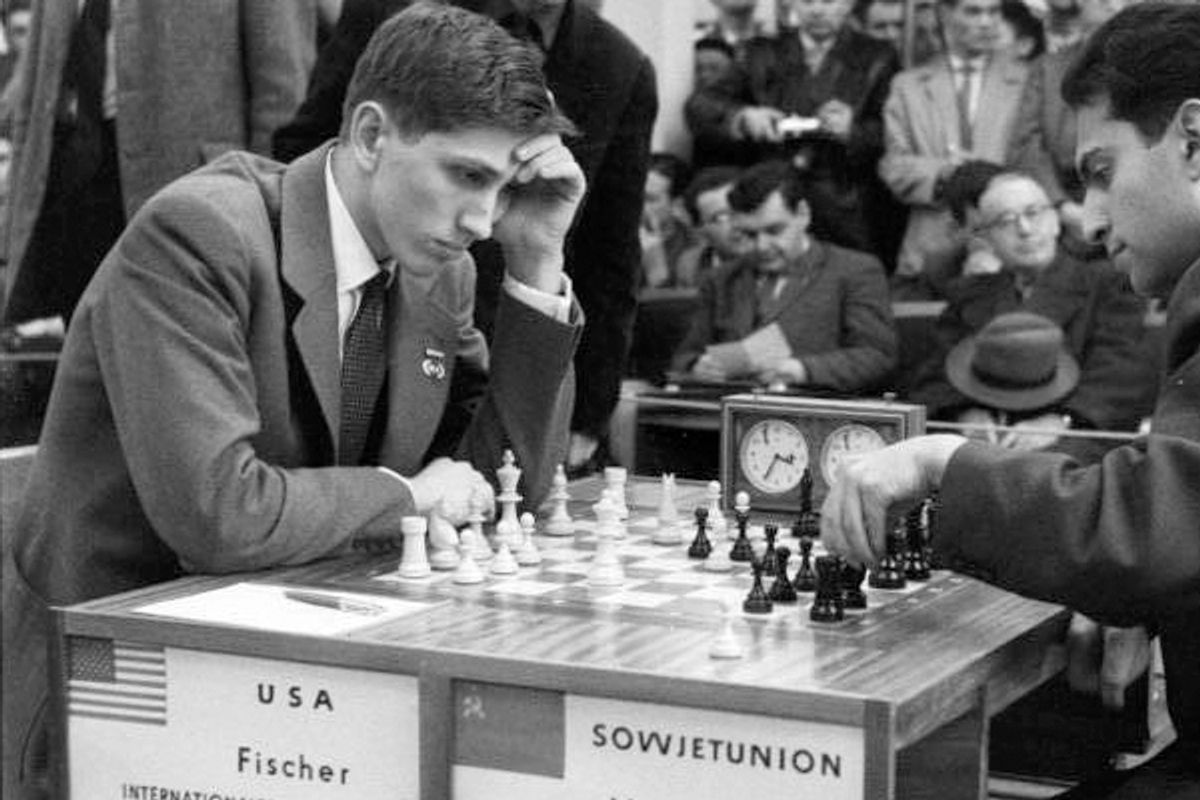 The life of Bobby Fischer was a compendium of secrets and puzzles from the very beginning. Who was the biological father of the 11th World Chess Champion, possibly the greatest player of all time, and certainly among the top five? Why did he retire from the game after winning his historic match with Boris Spassky in 1972 and refrain from playing publicly for 20 years? What was he doing during those two decades? Why did he espouse a venomous anti-Semitism despite being Jewish himself as well as close to and reliant upon many Jewish friends? Why did those friends put up with him and why, over and over again, did they run to his aid, when his behavior toward them was often contemptuous? And, above all, was he insane and, if so, did his genius have some connection to his madness?

Frank Brady's "Endgame: Bobby Fischer's Remarkable Rise and Fall -- From America's Brightest Prodigy to the Edge of Madness," cannot answer these questions conclusively, but it presents Fischer's story with an almost Olympian evenhandedness that ends up making it far more absorbing than any sensationalized account. Brady knew Fischer as a child, as Fischer was emerging as a chess prodigy in New York City, but the author renders himself almost invisible in this book. The cloud of chaos and ire that Fischer walked around in all his life doesn't seem to have infected his biographer at all.

It should be said upfront that "Endgame" contains no detailed accounts of chess games or moves, and can be read and understood even by those who don't play at all. (My most recent game was with a 6-year-old; we were evenly matched, given that he'd just learned the rules and I could barely remember them.) The book may, perhaps, leave chess aficionados unsatisfied on that account, but this decision makes "Endgame" intelligible to anyone interested in the human aspect of Fischer's life and career.

Among the misperceptions Brady aims to correct is the prevalent belief that Fischer was neglected or unloved by his mother, Regina, a brilliant, Swiss-born American who married a German biophysicist while studying medicine in Moscow. Bobby was born in Chicago, at a point after his mother had separated from his legal father, who was living in Latin America and unable to enter the U.S. due to his Communist ties. There are goods reasons to believe that Bobby's biological father was a Hungarian Jewish physicist (and refugee from Nazi Germany), Paul Nemenyi.

Brady offers many instances in which Regina supported and provided for her son throughout his life (including signing over her Social Security checks to him during his 20 years of reclusion), pointing out that most of the privations and loneliness of Bobby's childhood arose from the fact that the family was very poor and Regina a working single mother. She did allow Bobby to travel alone to chess matches when he was a young as 9, and when she moved overseas to resume her medical studies, she left the 16-year-old boy to live alone in the family's Brooklyn, N.Y., apartment. However, given her son's unquenchable obsession with the game and general disregard for adult authority, she probably felt she had little choice in such matters. As far as Brady is concerned, the relationship between mother and son was always loving.

However, if Bobby suffered from a genetically rooted mental disorder, chances are he got it from Regina. She went through a brief period of disorganization and near-vagrancy at the time he was born, an episode ominously echoed by the years Bobby spent living in flophouses and shambling around Pasadena, Calif., after the 1972 match with Spassky. Whoever his biological father was, Bobby also inherited a highly specialized and often volatile intelligence that would also make him the youngest American to attain the rank of chessmaster at 14 -- and at 15, the youngest international grandmaster to that date.

The qualities contributing to these triumphs were Fischer's ferocious capacity for total focus on chess, his highly competitive personality and his phenomenal memory. In his youth, he lived, breathed and ate chess -- literally: Brady recounts that the pieces of his personal set became encrusted with crumbs and other food, and Fischer jokingly complained when the admirer who bought the set as a keepsake cleaned them. His mother often worried that he was neglecting his schoolwork (not to mention his social life), and at one point insisted on conducting all their domestic conversations in Spanish until he improved enough to do well on a language exam.

Fischer's outside interests never did him much good, however. He seems to have had little use for romance and sex (until, late in life, he became preoccupied with the need to reproduce his own genius), and his more profound ruminations led him first to embrace an evangelical church run by a radio preacher, then to dabble in a series of faiths. His final spiritual flirtation before his death in Reykjavik, Iceland, in 2008, was with Roman Catholicism, but he also considered the philosophy of the Bhagwan Shree Rajneesh, always adopting a one-foot-in/one-foot-out stance toward the rules and proscriptions of any given creed.

One of the few constants in Fischer's life -- besides chess, that is -- was his anti-Semitism, a bizarrely capricious version of the prejudice that absolved anyone he considered a "good person" (whatever their faith or ethnic background) and labeled anyone he disliked or distrusted a "Jew," again without regard to their religion or background. He was also convinced, at various points in his life, that the USSR and the U.S. government were plotting to assassinate him.

Although many of Fischer's anxieties sound delusional, he was that rare paranoid whom many people are genuinely out to get. His complaints, early in his career, that Soviet chess players were colluding to maintain their nation's dominance of the world's championship turned out to be well-founded. At the height of his rivalry with the Soviet players, a secret chess lab was even set up in Russia to suss out his game and devise ways to thwart him. Due to his mother's leftist activism and his own visit to Moscow as a teenage prodigy, the family's phone was tapped, their associates questioned and their lives monitored by the FBI.

The U.S. government's animus toward Fischer began with his rematch with Spassky in 1992, an event sponsored by a Serbian propagandist. By participating, Fischer was in violation of American sanctions against Slobodan Milosevic's Yugoslavia. He had been refusing to pay income taxes for years, in retaliation for a lawsuit that went against him in an American court. This hadn't been a problem during the 1980s, when he was mostly broke, and U.S. officials might even have been willing to shrug off the sanctions violations, but in the 2000s, Fischer made dozens of appalling anti-American and anti-Semitic broadcasts from a small radio station in Japan, where he was living. These got onto the Internet, and in particular the ones made directly after 9/11 may have provoked the U.S. to step up its efforts to chastise him.

Fischer became in effect a man without a country, living in Eastern Europe and Asia, until he was arrested for a passport violation while entering Japan and detained there for months as his fate was disputed. Finally, Iceland agreed to offer Fischer citizenship in 2005 and he spent the last three years of his life there. He died of kidney failure at 64, refusing dialysis because he mistrusted doctors and conventional medicine.

Just how crazy was Bobby Fischer? Those best qualified to judge, such as the psychiatrist friend who kept him company in his final days, insisted he was not schizophrenic or psychotic; he didn't hallucinate or lose touch with reality. However, he clearly wasn't mentally healthy. The intensity of his attention to chess was certainly compulsive, and it unbalanced his life in addition to making him one of the game's greatest players.

But Fischer's celebrity seems to have done him more damage than anything else. It fueled the grandiosity that lies at the heart of all paranoia and it turned him into an imperious diva who inflicted ridiculous demands -- that a hotel raise the level of his toilet seat by exactly 1 inch, for example, or that he be paid outlandish fees just to discuss the possibility of a high-profile match -- apparently for the sake of exercising arbitrary power. People tolerated treatment from him they would not have suffered from anyone else, which surely didn't help with his difficulty perceiving limits. The world loved Bobby Fischer for his genius and his charisma, and too much of it forgave him too easily for his hateful, crackpot diatribes. But for all that it adored him, it didn't do him any favors.

Biography Books Our Picks What To Read