Tanks, jets and guns surround, but will not disperse city protesters 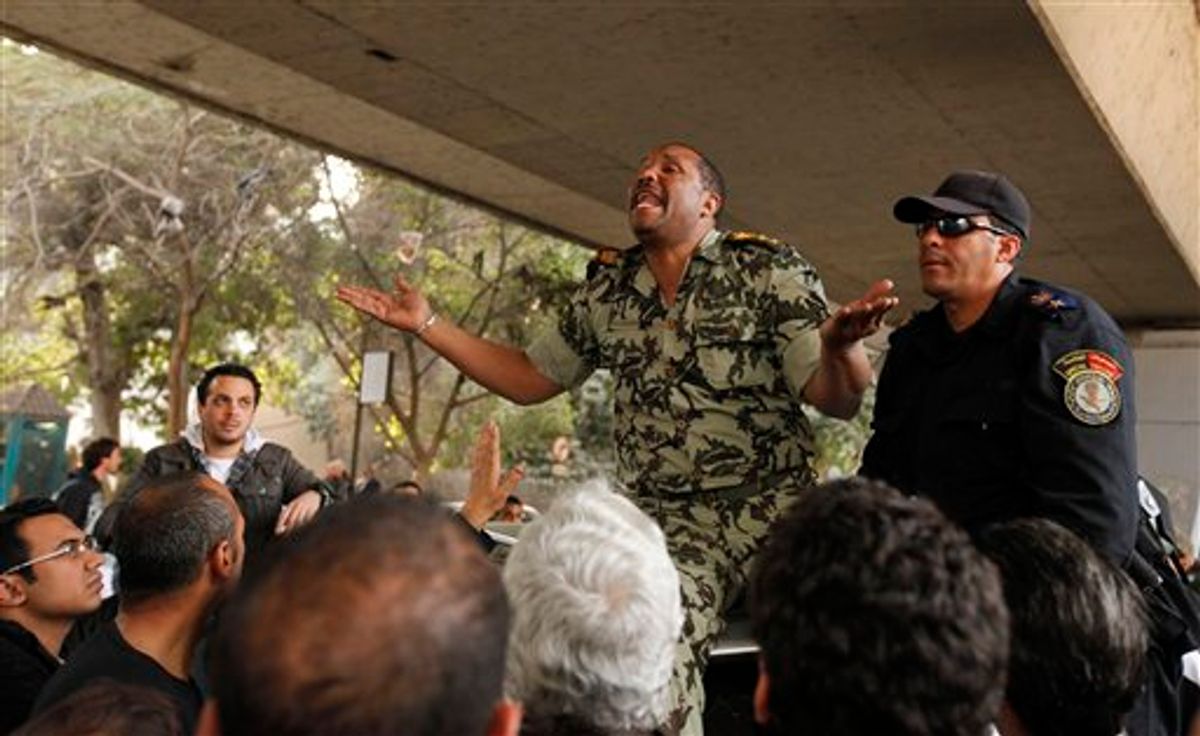 An unidentified high ranked military official, center, and a police officer explain to the crowd that army, police and the citizens must work hand in hand, in Cairo, Sunday Jan. 30, 2011. The Arab world's most populous nation appeared to be swiftly moving closer to a point at which it either dissolves into widespread chaos or the military expands its presence and control of the streets. (AP Photo/Victoria Hazou) (AP)
--

Egypt's powerful military stepped up its presence across the anarchic capital on Sunday, closing roads with tanks and sending F-16 fighter jets streaking over downtown in a show of force after days of looting, armed robbery and anti-government protests.

The army made no attempt, however, to disperse some 5,000 protesters gathered at Tahrir Square, a plaza in the heart of downtown that protesters have occupied since Friday afternoon. They have violated a curfew to call for the ouster of President Hosni Mubarak's regime, which they blame for poverty, unemployment, widespread corruption and police brutality.

"You are the owners of this revolution. You are the future," he told the cheering crowd. "Our essential demand is the departure of the regime and the beginning of a new Egypt in which each Egyptian lives in virtue, freedom and dignity."

One of the senior leaders of the outlawed Muslim Brotherhood, which wants to establish an Islamist state in the Arab world's most populous nation, told The Associated Press he was heading to Tahrir, or Liberation, Square to meet with other opposition leaders.

On the first day of trading across the Mideast after a weekend of protests and violence, nervous investors drove stocks down sharply. Crowds of foreigners filled Cairo International Airport, desperate and unable to leave because dozens of flights were canceled and delayed.

Gangs of armed men attacked at least four jails across Egypt before dawn, helping to free hundreds of Muslim militants and thousands of other inmates. Young men with guns and large sticks smashed cars and robbed people in Cairo.

The official death toll from five days of growing crisis stood at 97, with thousands injured, but reports from witnesses across the country indicated that the actual toll was far higher.

The lawlessness, uncertainty, and indications of an attempted exodus from Cairo were gravely damaging Egypt's economy, particularly tourism, which accounts for as much as 11 percent of the country's gross domestic product.

Banks were closed on orders from Egypt's Central Bank, and the country's stock market was shut on what is normally the first day of the trading week.

An unprecedented Internet cutoff remained in place for a third day after the country's four primary Internet providers stopped moving data in and out of the country early Friday in an apparent move by authorities to disrupt the organization of demonstrations. Egyptian mobile-phone networks were back up but with text-messaging widely disrupted.

The U.S. Embassy in Cairo told its citizens in Egypt to consider leaving the country as soon as possible, and said it had authorized the voluntary departure of dependents and non-emergency employees, a display of Washington's escalating concern about the stability of its closest Arab ally.

Secretary of State Hillary Rodham Clinton appealed for an orderly transition to lasting democracy in Egypt, saying the U.S. expects that the protests will lead to free and fair elections.

"I want the Egyptian people to have a chance to chart a new future," she said. "It's not a question of who retains power ... It's how are we going to respond to the legitimate needs and grievances expressed by the Egyptian people."

Israel's prime minister told his Cabinet that he was "anxiously following" the crisis, saying in his first public comments on the situation that Israel's three-decade-old peace agreement with Egypt must be preserved.

Widespread looting and attacks erupted after police virtually disappeared on Friday evening, creating a security vacuum only partially filled by the presence of army troops backed by tanks at key sites around this city of 18 million people.

The military has been generally welcomed by demonstrators across Cairo, unlike the widely despised police, and the army sent hundreds more troops and armored vehicles onto the streets starting Sunday morning.

In the afternoon, truckloads of hundreds of police poured back into Cairo neighborhoods and took up positions on the streets.

Interior Minister Habib al-Adly told police commanders said he was ordering security forces to return to the streets in Cairo and elsewhere to work in tandem with army troops to restore order.

"It is necessary that the police role is quickly restored and that there should be cooperation in the field with the armed forces ... to defend the presence and future of the nation," he said.

In some spots, cops were jeered by residents who chanted anti-police slogans and demanded that they only be allowed to deploy jointly with the military.

In one part of Tahrir Square, soldiers working with civilian protester volunteers were even checking IDs and bags of people arriving at the square, saying they were searching for weapons and making sure plainclothes police did not enter the square.

"The army is protecting us, they won't let police infiltrators sneak in!" one volunteer shouted.

Then, minutes before the start of a 4 p.m. curfew, at least two jets roared over the Nile and toward Tahrir Square in the heart of Cairo, where thousands of protesters have gathered each day to demand the end of the administration.

The jets made several passes over the square, dropping lower every time and setting off alarms in parked cars.

Some protesters clapped and waved to them while others jeered. Lines of army tanks jammed a road leading into Tahrir, and a military helicopter hovered overhead.

"This is terrorism, they are trying to scare the people with the planes and the tanks. They are trying to make people afraid and leave the square," said Gamal Ahmed, a 40-year-old air-conditioning technician.

ElBaradei, the former head of the U.N. nuclear watchdog left after his brief appearance, and some demonstrators dismissed him as an expatriate long removed from the country's problems.

"Many people feel he loves prizes and traveling abroad," said Muhammad Munir, 27. "He's not really one of the people."

State TV Sunday showed images of Mubarak during what it said was a visit to the country's military command center. The president looked somber and fatigued in his first public appearance since he addressed the nation late Friday to promise reform and annouce the dismissal of his Cabinet.

The brief footage appeared designed to project an image of normalcy.

But Egyptian security officials said that overnight armed men fired at guards in gun battles that lasted hours at the four prisons including one northwest of Cairo that held hundreds of militants. The prisoners escaped after starting fires and clashing with guards.

Those who fled included 34 members of the Muslim Brotherhood, whose lawyer, Abdel-Monaem Abdel-Maqsoud, told The Associated Press they were among scores rounded up by authorities ahead of large anti-government demonstrations on Friday. The escapees included at least seven senior members of the group.

The security officials said several inmates were killed and wounded, but gave no specific figures. They spoke on condition of anonymity because they were not authorized to share the information with the media.

The officials told The Associated Press that army troops were hunting for the escaped prisoners, in some cases with the help of the police. State television also showed footage of what it said was dozens of prisoners recaptured by the army troops, squatting on dirt while soldiers kept watch over them.

In the southern city of Assiut, officials said riot police stormed the city's main prison to quell a prison riot, using tear gas and batons against inmates. An Associated Press reporter saw army tanks were deployed outside the prison, on bridges straddling the Nile and at the police headquarters.

Thousands of Alexandrians met to pray in downtown Alexandria, a Mediterranean port city that is a stronghold of the Muslim Brotherhood. After prayers, the crowd marched towards the city's old mosque to pray for the souls of those who died in the protests.

The pan-Arab broadcaster Al-Jazeera said that Egyptian authorities ordered the closure of its Cairo news hub overseeing coverage of the country's massive street protests, denouncing the move as an attempt to "stifle and repress" open reporting.

The Qatar-based network has given nearly round-the-clock coverage to the unprecedented uprising against Mubarak and had faced criticism by some government supporters and other Arab leaders as a forum to inspire more unrest.