No other event has ever featured quite so much Newt Gingrich 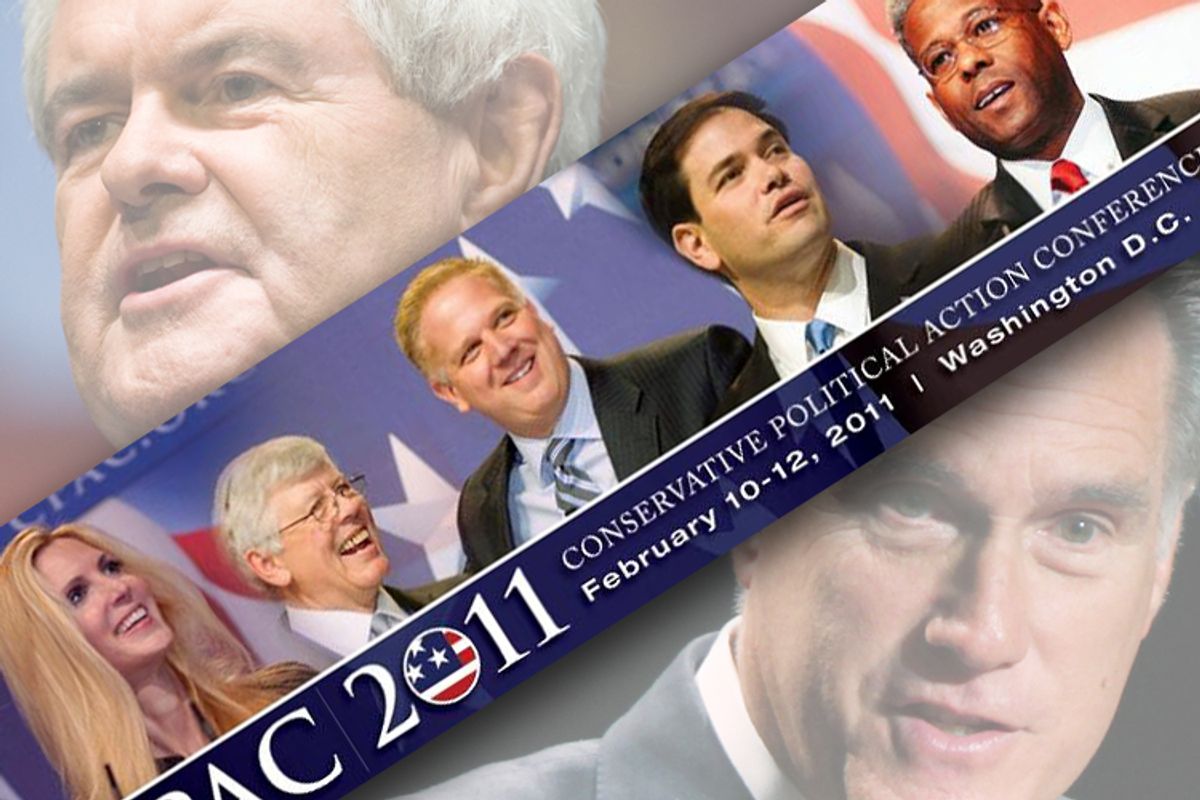 Do you want to watch Newt Gingrich speak for 60 consecutive hours without pausing? Then head down to the Conservative Political Action Conference, happening Feb. 10-12 at the Washington Marriott Wardman Park Hotel. (Overflow rooms still available across the street at the Omni Shoreham.) The American Conservative Union has published the agenda for the conference, and it looks like they won't let the boycotts by various prominent conservatives -- due to the participation at CPAC of a gay Republican group that explicitly doesn't ever fight for civil rights for gay people -- spoil the fun.

Let's take a look at the agenda!

Day one, right off the bat, Michele Bachmann, 10 a.m.. Boom. But wait: She'll be a hoot and a half, but the more lucrative CPAC event is happening at the same time:

I bet one of the secrets is "be an attractive woman who hates Muslims." (Another secret: Try being the child of a prominent member of the conservative movement.)

At 11, in the main ballroom, Rep. Allen West will fire a handgun past the heads of various thrilled audience members for 15 minutes or so. At noon, in room 8216, is "Getting Started in Hollywood." "Industry veterans" -- Kevin McKeever, Bank of Kev Productions, Lisa Mei Norton of BigDawg Music Mafia Larry O’Connor, from Andrew Breitbart’s Big Hollywood -- will "show you the ins and outs of getting a career started in the world of Film/TV and Theater."

At 1 is the first of the conference's many tributes to Ronald Reagan. There will also be a "Blogger Lunch with Citizens United Productions," and Citizens United president David N. Bossie will screen a video titled "David v. Goliath: The One Year Anniversary of Citizens United v. Federal Election Commission." I guess the major corporations and well-connected longtime GOP fundraisers are the "David," here, and some stupid liberals are the "Goliath."

Newt Gingrich (and Callista!) will be signing copies of "To Save America: Stopping Obama's Secular-Socialist Machine," "Valley Forge: George Washington and the Crucible of Victory," and other titles at the "American Solutions Booth."

Rick Santorum has been confirmed for 2 p.m.. Also at 2 p.m., Newt Gingrich (with Callista!) will hold the first of his many appearances. He will be screening "America at Risk: The War With No Name" in the "Citizens United’s CPAC Theater."

At 2:30, Carrie Lukas, author of "The Politically Incorrect Guide to Women, Sex and Feminism," will moderate a discussion titled "Traditional Marriage and Society." (GOProud not mentioned among the participants in this discussion.)

At 3:45, Newt Gingrich will host a reception in the Delaware Ballroom.

At 4, as you might've already heard, Donald Rumsfeld will win a "Defender of the Constitution Award." The real excitement begins at night. Just take a look at this lineup! Victoria Jackson! Ray Stevens! "Cash Bar!"

At 9 p.m., Newt and Callista Gingrich will screen the "critically acclaimed series" "Rediscovering God in America I & II" in the Delaware Ballroom. (Running time: 120 minutes.)

After the 8:30 "Mimosa Reception with members of Congress" (bright and early!) "Democratic pollster" Pat Caddell will discus "Public Attitudes Toward Security" with his Republican colleague at "SecureAmericaNow.com," John McLaughlin.

Romney's onstage at 10:30, to beg for acceptance from the conservative movement. Then, Grover Norquist is scheduled to be in two places at the same time: At 12:15, "Engaging America through Conservative Pop Culture" featuring Stephen Baldwin and a bunch of people you've never heard of. Later, Bay Buchanan and Tom Tancredo debate immigration, and author Michael Prell will sign copies of "Underdogma: How America's Enemies Use Our Love for the Underdog to Trash American Power." Pawlenty's on the mainstage at 3. But that's also when this is happening:

Hah, "(invited)." Classy. And that sounds like a very good documentary.

Mitch Daniels will speak at the "Ronald Reagan Banquet" at 7:30, followed by the presentation of "The Ronald Reagan Award." ("Recipient: TBD.") And then -- why, look who's here:

Newt and Callista Gingrich will screen "Nine Days That Changed the World" -- a film about Pope John Paul II -- at 9 a.m., to be followed by a Q&A session.

The 9 a.m. round table featuring Hans von Spakovsky and Andrew McCarthy is called "Lawlessness, Racialism and Terror at Obama’s Department of Justice," and it will be about how Obama is a puppet of the powerful New Black Panthers Party.

Ann Coulter's annual comedy performance will happen at 3:45 (Jonah Goldberg's opening for her), and at 5:15 they will reveal the results of the straw poll. (Someone unelectable will win.)

And on Sunday, after the conference, Newt Gingrich will probably be at the top of Metro escalator, desperately signing and distrusting some of his hundreds of books to passersby.