How not to run for president as a Republican

On second thought, maybe teaming up with the "socialist in chief" wasn't the smartest political move 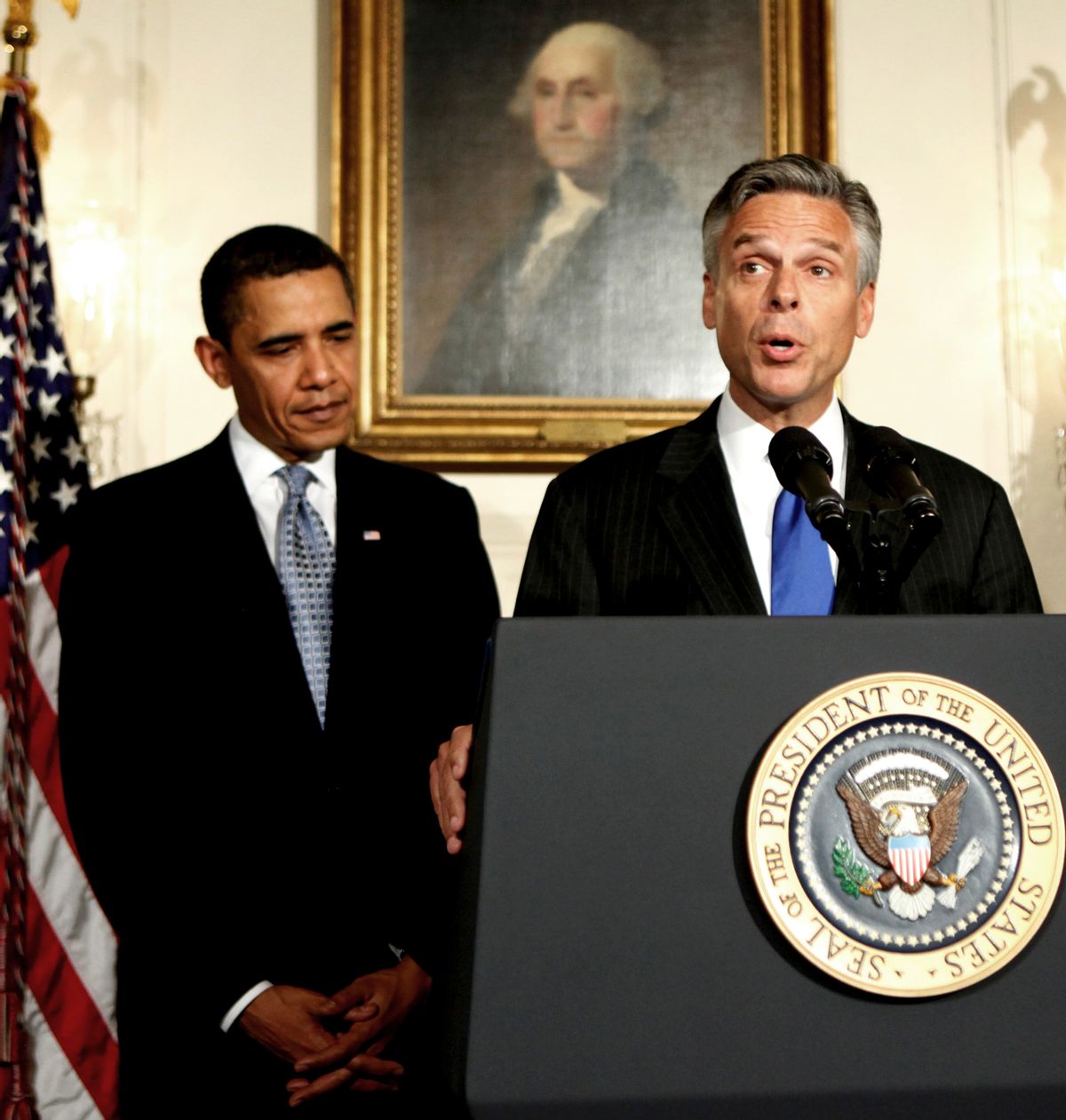 FILE - In this May 16, 2009 file photo, then-Utah Governor Jon Huntsman gives his acceptance remarks after his nomination by President Barack Obama as ambassador to China, in the Diplomatic Room at the White House in Washington. President Barack Obama pledged to bring change to Washington, but he is continuing one of the capital's most entrenched traditions: rewarding political supporters with ambassadorships. (AP Photo/Manuel Balce Ceneta, FILE) (Associated Press)
--

It's easy to get caught up in the excitement that accompanies a once-in-a-generation national election, to convince yourself that a seemingly sweeping electoral mandate has washed away the rules, alliances, incentives and assumptions governing politics.

This is apparently what happened with one of the Republican Party's emerging stars when Barack Obama rolled up 53 percent of the popular vote in 2008, the highest share for a Democrat since Lyndon Johnson's 1964 landslide. "It's like the world began in November," Jon Huntsman declared shortly thereafter. "The old ethos world view -- all that's been decimated." Thus did Huntsman, himself reelected to Utah's governorship with 78 percent of the vote in November '08, quickly agree to give up his job to serve as Obama's ambassador to China, making him one of the most visible Republicans in the new Democratic administration.

In a sense, his move was refreshing for its lack of obvious political calculation. Huntsman was 48 and had already been pegged a national Republican up-and-comer, and thanks to Obama's win, the 2012 Republican nomination would be wide open. The logical move would have been to stay on as governor, pick a few fights with the White House, then take a shot in '12 (knowing that a better-than-expected showing in the GOP primaries would potentially enable a follow-up bid in 2016). Instead, Huntsman joined forces with the other party's president, sacrificing (it seemed) his own political ambition for the good of the country. New ethos, indeed.

But now, two years later, the old ethos is back. Huntsman, the word is, will soon abandon his ambassadorship and enter the 2012 Republican presidential primaries. Which raises the obvious question: Why did he ever go to work for Obama in the first place?

After all, the mere fact that he teamed up with Obama figures to disqualify Huntsman in the eyes of a not-insignificant chunk of the GOP electorate -- particularly in activist-rich caucus states, like Iowa. His official line, apparently, will be that he answered a call to service from his president, like any patriot would. There may be some truth to this, but it only presents another question: Why abandon the call to service after 19 months on the job?

I'm guessing that Huntsman's calculations are probably a little more cynical, rooted in an overreaction to the '08 results that was hardly uncommon. Remember how Obama's triumph, which included victories in traditionally Republican bastions like Virginia, Indiana and even a piece of Nebraska, was supposed to usher in a new era of Democratic dominance? How the GOP, broadly discredited by Bush and Cheney and dragged down by the increasing prominence of its fringe elements, would take years -- maybe even decades -- to reemerge as a viable national party again? It was all shortsighted thinking, of course, and historically ignorant (the GOP recovery after LBJ's '64 rout was lightning fast, as was the Democratic comeback from Richard Nixon's 1972 massacre).

But for many people in politics, it just made sense. The country had embraced Obama-ism, the GOP was in serious decline, and the 2012 Republican nomination would be worthless. In this sense, Huntsman's move seemed sensible enough: Join a beloved administration, score points for embracing the new "post-partisan" spirit, enjoy the life of an ambassador, and skip a 2012 campaign that would be pointless anyway. Don't forget: Huntsman had already separated himself from the GOP's Tea Party base by embracing (some) environmentalism and gay rights as governor, and endorsing Obama's stimulus.

What he didn't count on was how quickly Obama's poll numbers would fall to earth (that's what a terrible economy will do to any president), and how the GOP's fortunes would, as a result, be revived. He also may not have realized the extent to which the '12 GOP field is truly wide open. The next Republican presidential nomination isn't quite as worthless as it once looked and -- more to the point -- the opportunity to wage the kind of "better than expected" effort that would segue into a follow-up bid in 2016 is more real for Huntsman than he could have imagined in '09. So he'll take his Obama baggage, rationalize it as best he can, and head off to Iowa, New Hampshire and South Carolina.

There really isn't much in the way of a modern precedent for what Huntsman is doing. Generally, when a politician from one party takes a job with the other party's White House, it's for a career-capping appointment: Think William Cohen leaving the Senate to be Bill Clinton's secretary of defense, or Norm Minetta becoming George W. Bush's transportation secretary. Henry Cabot Lodge, appointed ambassador to South Vietnam by JFK in 1962, became interested in the 1964 GOP nomination when Kennedy was killed; he even approved a write-in campaign that produced a surprise victory in the '64 New Hampshire primary (though his sort-of campaign fizzled after that). But that was a different era -- and a different Republican Party, one with plenty of moderates and liberals who could understand why a Republican would take a position in a Democratic administration.

Even in a weak GOP field, it's hard to envision Huntsman breaking through in '12.  The taint of Obama-ism will probably be too strong. Here's guessing that if he had it to do over again, he wouldn't have said "yes" to that job offer two years ago.