The dangerous silliness of a balanced budget amendment

Bad idea: Some GOPers want a government straitjacket in return for raising the debt ceiling 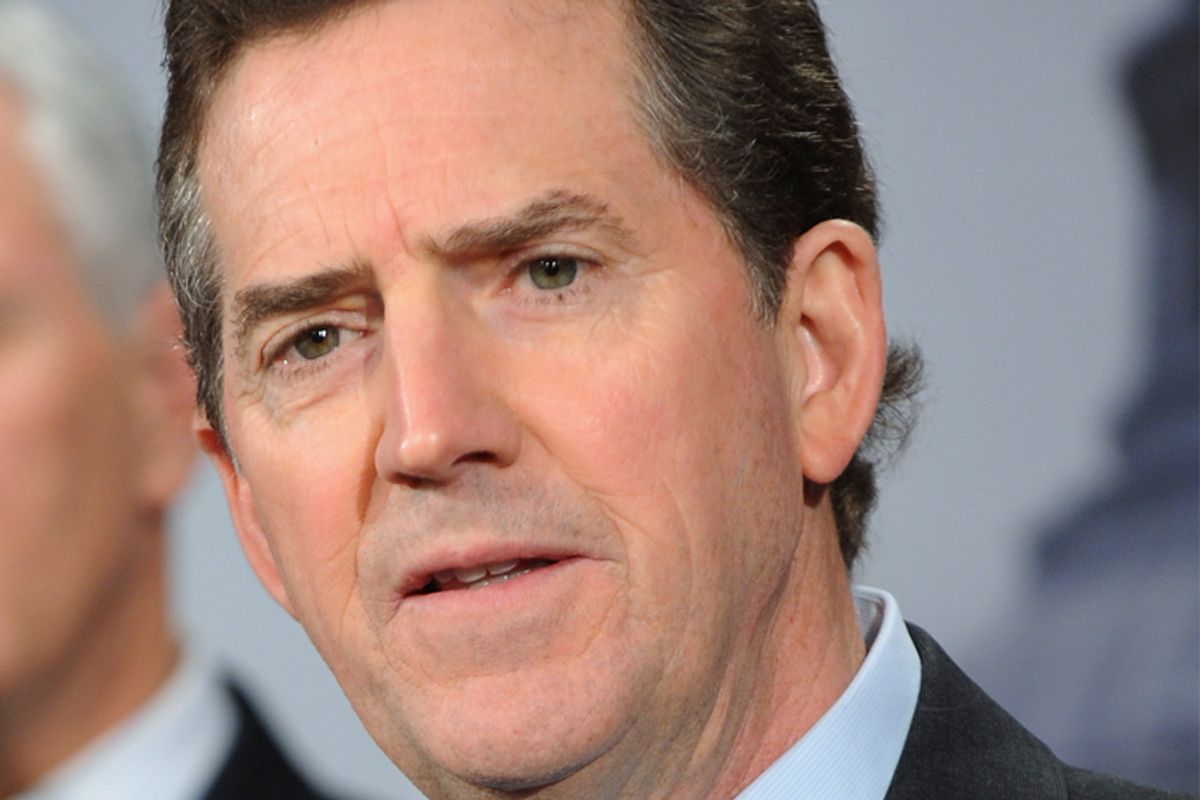 A perennial favorite for politicians who want to pretend to be fiscally responsible is back in the air: A balanced budget amendment that would once and for all put government finances in order. House Republicans introduced a new version of such legislation this January, just as they did in January 2009. (The main difference between this year's model and 2009's: Raising taxes is explicitly discouraged as a method for reaching equilibrium.) In the Senate, South Carolina's Jim DeMint has been the most vocal supporter of a balanced budget amendment, warning that "powerful nations all the way from Rome to Russia have killed their economies by spending more than they had."

All the versions have basically the same requirements. Super majorities (three-fifths of the Senate and House) are required to break the rules, and there's always a get-out-of-jail-free card if a congressional Declaration of War is in effect. (Which means, of course, that even if there was a balanced budget amendment currently in effect, it wouldn't have been operative since 2001.) And, perhaps most important, the legislation also requires that the books be balanced at the end of every fiscal year.

The important tweak, this year, is that a growing number of Republicans are suggesting that a balanced budget amendment should be the quid pro quo exchanged for a vote to raise the debt ceiling.

But never mind that. In principle, most people would agree that over the long run, government spending and revenue should match. The real problem with a balanced budget amendment, as currently written, comes in the short term. It puts a fiscal policy straitjacket on the U.S. government that could be very dangerous in times of recession.

Let's try a thought experiment, and suppose that the U.S. Constitution had included a balanced budget amendment when Obama took office at the beginning of January 2009. We'll ignore, for now, the loophole provided by the ongoing war in Afghanistan, and posit, for the sake of argument, that there was no way that the White House could have gotten enough votes in the House to pass its stimulus package, given the supermajority requirements in a typical balanced budget amendment.

Sure, plenty of people might say: Well, that's exactly the point -- the government should not engage in budget-busting fiscal stimulus. But what about the reverse: budget-balancing anti-stimulus at the worst possible time?

As noted here many times before, the Great Recession exploded the government deficit because tax revenue plummeted while government spending on so-called automatic stabilizers -- unemployment benefits, etc. -- rose. According to the Congressional Budget Office, almost one-fifth of the $1.4 trillion deficit in 2009 can be blamed directly on a recession-induced tax revenue decline of around $320 billion. (A very nice chart here makes the diverging trend lines crystal clear.)

If Obama had been forced to adhere to the strictures of a balanced budget amendment for fiscal-year 2009, he would have had to cut spending enormously, or shock the economy with a big tax hike, or both, simply because of the precipitous downturn in the business cycle. While one can understand why people cite a 9.4 percent unemployment rate as evidence that the stimulus did not work, I, for one, am very grateful that at a time when the U.S. economy was shedding well over half a million jobs a month, we didn't simultaneously cut spending on social welfare and raise taxes. That would have been balanced-budget mandated suicide.

This is why most economists believe that the sensible way to proceed is to balance the budget over the time period of a typical business cycle, both ups and downs included, rather than a single fiscal year. But that raises its own gnarly questions: How does one budget realistically for something as imprecise and unknowable as the length or severity of a business cycle downturn? Who decides when the deadline for balancing the books finally arrives?

This is not a new problem for governments, and the solution has been known at least since the days of Joseph and the Pharaoh. You save when times are fat, and spend when times are lean. At least, that's what responsible leaders do, when they don't have a balanced budget amendment tying their hands.