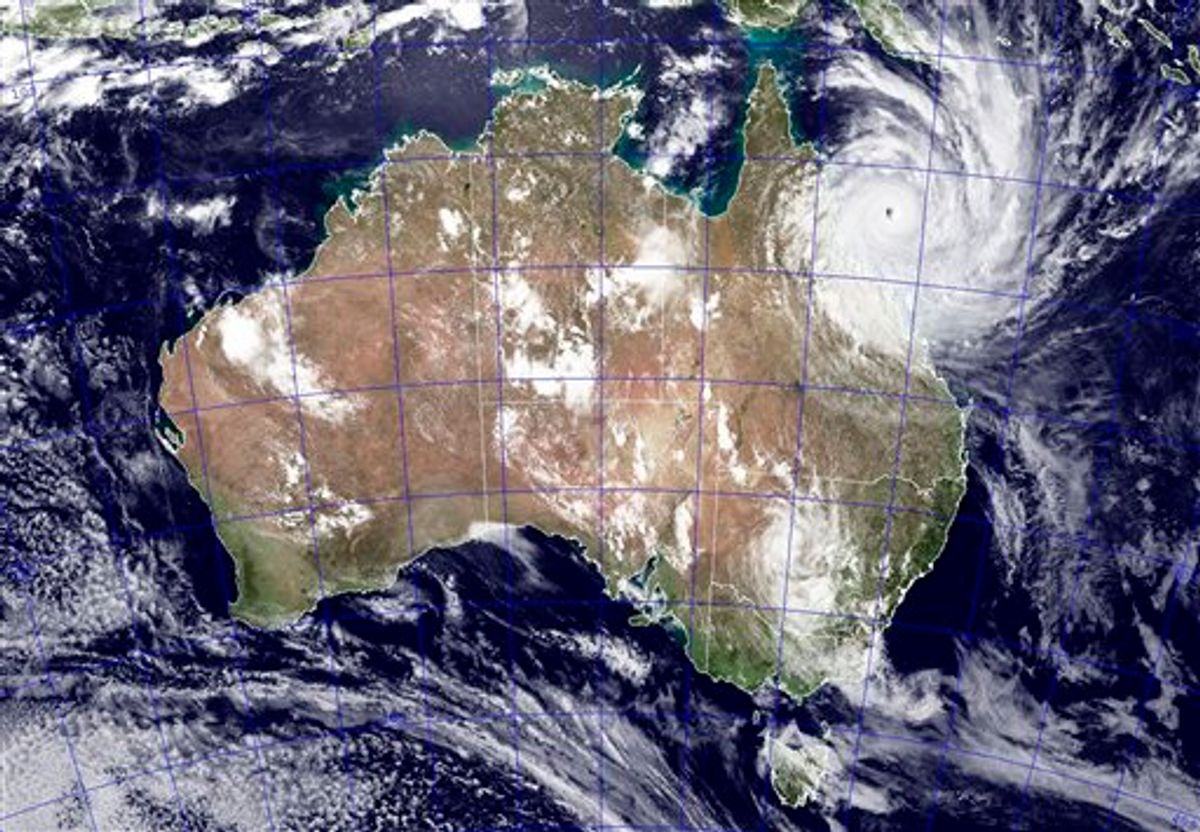 This image provided by NASA shows Tropical Cyclone Yasi as it approaches Queensland, Australia, Wednesday Feb. 2, 2011. This NEXSAT image captured this natural-color image at 04:32 GMT Wednesday Feb. 2, 2011. The Category 5 storm is expected to make landfall at approximately noon GMT Wednesday. Gusts up to 186 mph (300 kph) were expected when Cyclone Yasi strikes the Australian coast Wednesday after whipping across Australia's Great Barrier Reef. The storm front is more than 310 miles (500 kilometers) wide and Yasi is so strong, it could reach far inland before it significantly loses power. (AP Photo/NASA - Jeff Schmaltz) (AP)
--

A massive cyclone struck northeastern Australia early Thursday, tearing off roofs, toppling trees and cutting power to thousands, the most powerful storm to hit the area in nearly a century.

The eye of Cyclone Yasi roared ashore at the small resort town of Mission Beach in Queensland state, battering the coast known to tourists as the gateway to the Great Barrier Reef with heavy rain and howling winds gusting to 186 mph (300 kph).

Yasi compounded the suffering for Queensland, waterlogged by months of flooding that killed 35 people and inundated hundreds of communities. It struck an area north of the flood zone, but the Bureau of Meteorology said it would bring drenching rains that could cause floods in new parts of the state.

Witnesses reported roofs being ripped off, buildings shaking and trees flattened under the power of the winds. Officials said the storm surge would flood some places to roof level.

"This is a cyclone of savagery and intensity," Prime Minister Julia Gillard said in a nationally televised news conference as the storm moved toward the coast. "People are facing some really dreadful hours in front of them."

More than 10,000 people fled to 20 evacuation centers in a danger zone stretching 190 miles (300 kilometers), amid strong warnings in the past two days. Many others moved in with family or friends in safer locations. Still, authorities were preparing for devastation, and likely deaths.

The storm's front was about 300 miles (500 kilometers) across, with the worst of the winds expected to lash the coast for up to four hours, although blustery conditions and heavy rain could last for a day.

"It's such a big storm -- it's a monster, killer storm," Queensland Premier Anna Bligh said, adding that the only previous cyclone measured in the state at such strength was in 1918. "This impact is likely to be more life threatening than any experienced during recent generations."

The damage would not be known until first light, officials said.

In the city of Cairns, about 75 miles (120 kilometers) north of Mission Beach, guests at a waterfront hotel took cover in the central ballroom as lights flickered. Staff members handed out flashlights and pinned curtains shut over windows in danger of shattering.

Tourist Barbara Maskei, 49, of Germany, lay on the ballroom floor under a sheet reading a book, as her 20-year-old daughter, Annette, and husband, Peter, dozed beside her. For her, there would be no sleep. "I like to keep my eyes open," she said as the wind roared outside.

The staff distracted people from the storm by playing the movie "Music and Lyrics" on a giant screen. Some tried to sleep through the noise of the movie, wailing children and loud conversations.

In Innisfail, a town about 55 miles (90 kilometers) south of Cairns that sat nearly in the direct path of the storm, Mayor Bill Shannon said he saw the roof torn off a building near the local government building where about 500 people are sheltering.

"We're just hoping and praying we can all get through the night," Shannon said.

In nearby Tully, resident Ross Sorbello described feeling his house shake from the wind.

"The wind and rain outside are howling; it's a horrible sound," he said.

Storm surges of at least 6.5 feet (2 meters) were likely and would almost certainly flood some coastal communities, forecasters said, adding that up to 28 inches (700 millimeters) of rain could fall within hours in some areas.

At highest risk was an area about 150 miles (240 kilometers) long between Cairns and the sugar cane-growing town of Ingham, the bureau said. The storm was forecast to continue inland at cyclone strength for two days and gradually weaken. It was unclear what the damage to the Great Barrier Reef would be, experts said.

State disaster coordinator Ian Stewart said just one emergency call had been received -- from six people in their 60s who feared their apartment in the resort town of Port Hinchinbrook would be swamped by the storm surge. They were told to wait it out because it was too dangerous for emergency workers to try to reach them, Stewart said.

Winds knocked out power to about 90,000 homes, a number expected to rise.

Still, many in Yasi's path were stoic. Cairns resident Jane Alcorn banned those who planned to shelter with her in the garage of her apartment complex from panicking.

Queensland officials warned people for days to stock up on bottled water and food, and to board or tape up their windows. People in low-lying or exposed areas were told to evacuate.

More than 10,000 people took shelter in 20 evacuation centers, including one at a shopping mall in downtown Cairns, a city of 165,000. People huddled in hallways with blankets, camping chairs and snacks.

On Wednesday, police told people to get off Cairns' streets. "Everyone's gotta go now," one officer told pedestrians near the waterfront. "The water is coming NOW."

Warnings stretched as far away as Townsville, which is slightly larger than Cairns and about 190 miles (300 kilometers) to the south, and Mount Isa, about 500 miles (800 kilometers) inland.

Carla Jenkins, 23, of Cairns, packed a suitcase, taped the windows of her house and fled to her grandmother's sturdier apartment complex with her sister and her dog, Elmo. The women had candles, flashlights, water and canned food, and planned to spend the night huddled in a bathroom away from the windows.

"I can't see many Cairns people sleeping tonight," she said. "Tonight's going to be a very scary night."

Australia's huge, sparsely populated tropical north is battered annually by about six cyclones -- called typhoons throughout much of Asia and hurricanes in the Western hemisphere. Building codes have been strengthened since Cyclone Tracy devastated the city of Darwin in 1974, killing 71 in one of Australia's worst natural disasters.