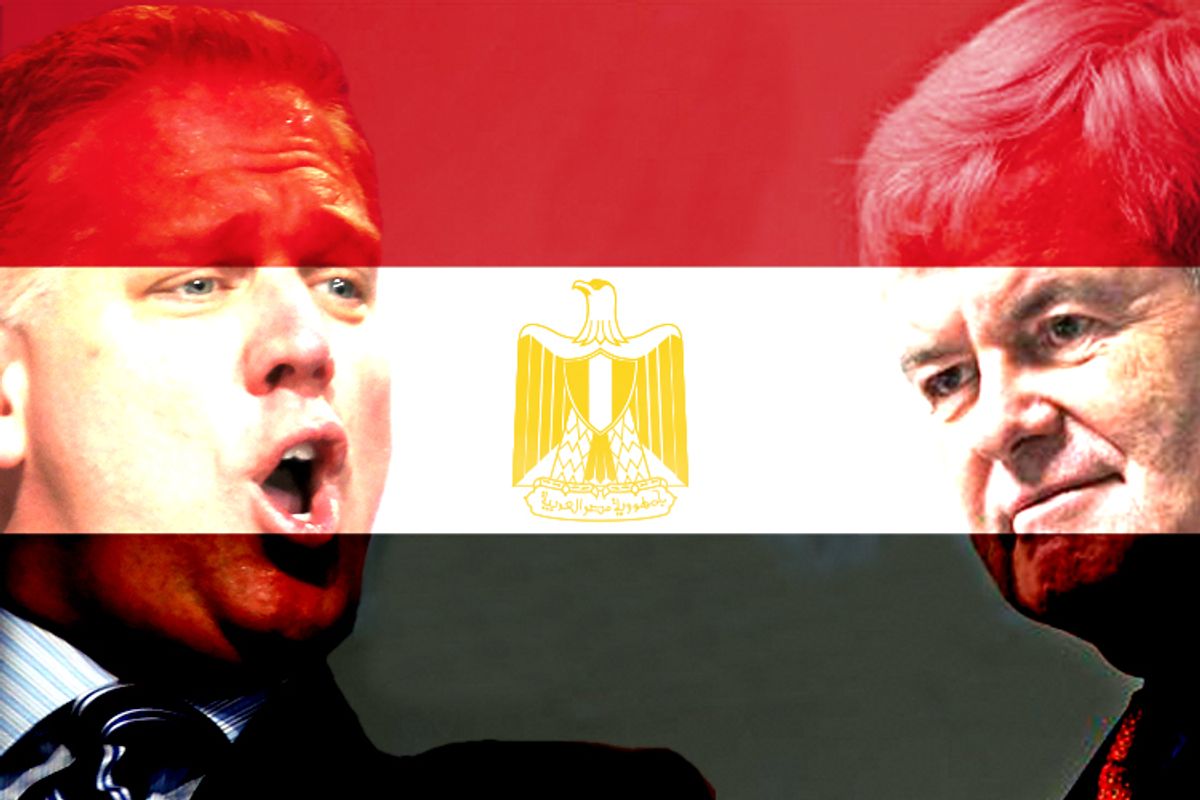 It took a few days for right-wing opportunists to figure out exactly how to deal with the popular uprising against Egypt's Hosni Mubarak, but they've caught up. Most of the world has watched the massive, peaceful demonstrations with deep admiration, hopes for a peaceful outcome, and uncertainty about where it will end up, especially with the emergence of violent Mubarak thugs Wednesday. Some Republicans, including John Boehner and even Mitt Romney, have actually managed to praise President Obama's cautious but increasingly firm statements demanding change. Despite the confusion, some right-wing fear-mongers are galloping to wildly false conclusions that serve them politically.

Naturally, Glenn Beck is the worst. We know he's losing his audience -- his January ratings were his lowest since his show began two years ago -- and he may be losing his mind. Monday night Beck outlined his grand vision of three dominant world powers, as a result of the Egyption turmoil. In case you missed it: "One, a Muslim caliphate that controls the Mideast and parts of Europe. Two, China, that will control Asia, the southern half of Africa, part of the Middle East, Australia, maybe New Zealand, and God only knows what else. And Russia, which will control all of the old former Soviet Union bloc, plus maybe the Netherlands. I'm not really sure. But their strong arm is coming. That leaves us and South America. What happens to us?"

What happens to us, indeed, in a country where Beck still has an audience of 1.7 million people (even if it's down a third from its peak)? On Tuesday he laid the blame for Egypt's unrest at the feet of "the uber-left, the anarchists and the communists and the socialists, the radicals, sowing the seeds and helping those in Egypt," and proclaimed: "The storm that I've talked about for so many years is here. The coming insurrection is here." Mercifully, he hasn't mentioned Frances Fox Piven (yet).

It must be said, the right-wing frothers are divided: They can't decide whether they want to hail Mubarak as an ally, or denounce him as a dictator while comparing him to Obama, or both. Among the 2012 contenders, Tim Pawlenty trashed Obama for equivocating on the future of the Mubarak regime and declared that it "should come to an end," while Newt Gingrich blathered on about the dangers of the Muslim Brotherhood without saying exactly what Obama -- or any president -- should do:

"The president went to Cairo and gave his famous speech in which he explained that we should all be friends together because we're all the same people doing the same things and there are no differences between us," Gingrich told Sean Hannity. "Well, I think there are a lot of differences between the Muslim Brotherhood and the rest of us."

Rachel Maddow noted Tuesday night that one-note John Bolton, who actually makes noise about running for president, is sounding another call for Israel to bomb Iran (which he does on every appropriate occasion, from Passover to St. Patrick's Day). Neocon loon Frank Gaffney has clearly gone off the deep end, first claiming that the Muslim Brotherhood had infiltrated the Obama administration, and now warning his conservative brethren that the Brotherhood is worming its way into their movement, too. Gaffney told, who else, Sean Hannity on Tuesday night:

I have to tell you, just this afternoon, I had a confidential meeting with some senior conservative leaders to warn them about an influence operation against the conservative movement. They don’t want to hear it either! This is endemic. We will not get this right if we don’t understood the Muslim Brotherhood there and here is the enemy.

I think Gaffney's ready to get bumped down the Fox food chain to Beck. How long will Roger Ailes let this insanity continue?

But let's make room for Sen. John McCain in the hall of shame on Egypt. He's not as deranged as some of the others, but he deserves higher standards, because he knows better. Like Gingrich, he warned Hannity of a Muslim Brotherhood takeover -- and most disturbingly, smeared Mohamed ElBaradei, the arms inspector who has become one of the opposition leaders, as "not a friend of the United States.” In fact, the right hates ElBaradei because he tried to be a very good friend to the United States but was rebuffed, when he repeatedly and publicly doubted the claims that Iraq had WMD, which were used to lie us into the war. He won a Nobel Prize for his work, as well as the undying enmity of the American right (those things tend to go together). McCain went on to suggest that ElBaradei may be a "figurehead" for the Muslim Brotherhood because he has "no real following in Egypt."

Juan Cole has an excellent take on why Egypt 2011 isn't Iran 1979, when what appeared to be a mass popular uprising was hijacked by Islamic fundamentalists. One key reason is that Egypt's economy relies far less on oil -- Iran's mainstay -- than on tourism, Suez Canal receipts, agriculture, trade and, of course, massive U.S. aid, all of which give whomever emerges to follow Mubarak much more incentive to retain ties with the West. (There's a lot more; read the whole thing.) It may be optimistic, but it's far more fact-based than the wild theories on the right.

Finally, at home, where House Homeland Security Committee Chairman Peter King, R-N.Y., will hold hearings to investigate the influence of radical Islam on America – King refers to American Muslims as the "enemy living amongst us" -- a study by the Triangle Center on Terrorism and Homeland Security reports that the number of Muslim-Americans who committed or were arrested for terrorist crimes has dropped by almost 60 percent since 2009, to just 20 last year. Maybe more important, according to Think Progress, tips from Muslim Americans led to a terrorist plot being thwarted in 48 of 120 cases involving Muslim Americans, according to the study.

We talked about Beck and right-wing hysteria about Egypt on "Hardball" today: