DiGiorno frozen pizza and cookie dough, together at last 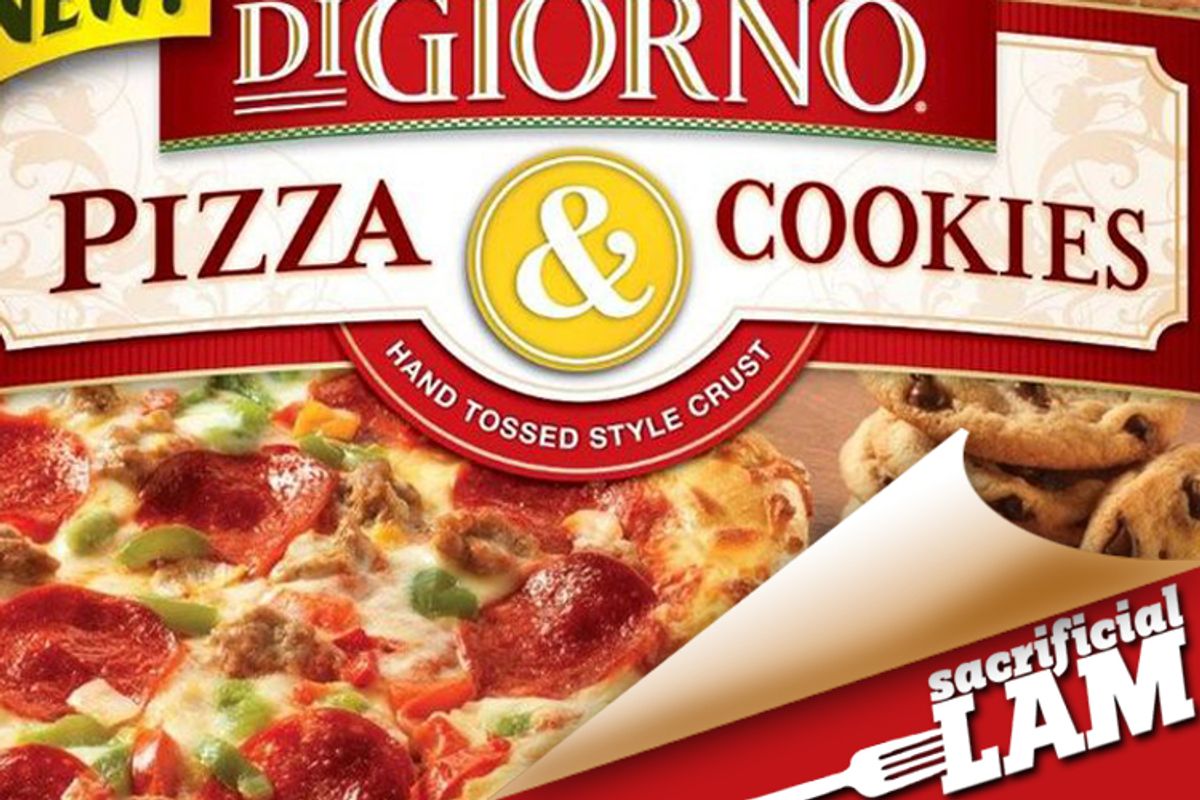 Lately we've been using our taste tests to (try to) be thought-provoking, fun and culturally wide-ranging, but when there's a new product that's being called "a watershed moment in American obesity," a certain crass fascination does take us back to the column's prurient roots.

So allow us to introduce: DiGiorno Pizza and Cookies -- about 2,000 calories' worth of frozen pizza, sitting cheek-by-jowl in a box with another 1,500 calories' worth of Nestle Toll House chocolate chip cookie dough. You'll have to buy your own pot. For now. (Apparently, there's another version of this product called Pizza and WYNGZ, where WYNGZ, I think, is supposed to mean something like chicken wings. But I'm not going to eat that, mainly because I think being paid to put something called WYNGZ in my mouth would technically qualify me as a porn star. Also click here for the funniest joke that can be made about WYNGZ.)

I don't spend very much time in front of supermarket freezers these days, so I found the rows of frozen pizzas completely mesmerizing. I greeted old brands like old friends: Ellio's, Totino's, Jeno's ... I pictured my mother parking her shopping cart in front of the case and piling up whichever one was on 79-cent special. I mentally tasted each one, remembering them all. Also, "Private Eyes" was playing over the P.A., and I'll admit I stuck around even longer just to hear the exhilarating sounds of Hall and Oates. If you want to know what my childhood was like, click on this video and reread this paragraph while the song plays.

(Disclosure: I couldn't actually find the Pizza and Cookies set, so I ended up buying a DiGiorno supreme pizza and a pack of Nestle Toll House peanut butter chocolate chip cookie dough to mimic the experience. And I was also admittedly self-conscious on the way home, with fashionable women looking at my see-through grocery bag and judging me. Private eyes, they're watching you!)

DiGiorno pizzas came out in 1996, after I moved out of range of Mom's freezer, but even having never tried them I always found them to be kind of depressing. "It's not delivery, it's DiGiorno!" its slogan goes, and it's a commentary on our food culture that I could never swallow. I mean, sure, sell me the old bull about it being "just like grandma's" or whatever. That way, you know you're lying and I know you're lying, but it's the kind of thing for which the term "polite fiction" was invented. But to basically say your pizza is so good you'd mistake it for Domino's? To say that's the standard by which your pizza should be judged? Man. Talk about the tyranny of low expectations.

So my prejudices are on the table. And I have to admit that I was confused by the fantasy that packed-in chocolate chip cookies are supposed to sell. Instead of nostalgia for the mom who made dinner and baked cookies every night, this is nostalgia for the mom who called Domino's and pulled frozen cookie dough out of the freezer. Which, now that I think about it, has probably been true for generations. Sigh! And to the tasting we go!

Pulling the pizza out of the oven, there was a certain deadness to it -- none of the bubbling cheese, steam or even the flop or crisp crackle of dough you'd expect from even a facsimile of a beloved food. Instead, it was just ... there. It positively spurned any attempt at affection. For something that was going to burn the ever living hell out of my tongue in a few minutes, this thing projected an icy cold. It slid around my plate, 6 inches of pizza-disc, the crust so stiff and contained and reserved. The word "puckish" means "playful," but while this thing is definitely puck-ish, it is definitely not puckish.

At first bite, I was struck by how remarkably tender the crust is. If it were a scone or a biscuit, I might say, "Wow, it's kind of amazingly crisp and dissolve-y." But this is a pizza crust, which means that it is supposed to be foldable or chewy or, well, something other than a scone or a biscuit.

I decided to start reading the ingredients while nibbling on more of the crust and waiting for the cheese to be less than nuclear-hot. I saw no mention of "sausage" in the ingredients, but I did see something called "cooked seasoned pizza topping." And, for a second, I felt bad for the food scientist that came up with cooked seasoned pizza topping, because I'm sure at some point she was incredibly proud of her ability to come up with some unearthly cheap sausage for this product, only to have the lawyers tell her, "Well, sorry, but we're going to have to call it cooked seasoned pizza topping, because the government, which allows us to call Vienna Sausages sausages, won't let us use that word to describe whatever the hell you just came up with."

I started getting cold feet. I thought that maybe eating a vegetable would help counter whatever I was going to put in my body, so I munched on a wedge of raw cabbage. (Really, this happened.)

Courage steeled, I dug deeper into the DiGiorno. And ... wow. It's been years, maybe decades, since I ate frozen pizza, but once I hit the saucy, cheesy part, the flavor flooded right back. That high, sweet taste from the sauce, sweeter even then ketchup, was totally transporting. It's true that the fennelly sausage -- excuse me -- cooked seasoned pizza topping had no discernible texture. And that the cheese -- whose main role is to be kind of chewy and satisfyingly greasy -- strangely had no primary flavor, but still had the aftertaste one expects of mild cheese. But that sauce! Dear lord, that sauce! It is the flavor of third grade. Of second grade. Of the womb. It's like burying my face in the warm bosom of oregano. Not that I wasn't eating in a civilized way, but I have to tell you that by the end, there was a 5-inch streak of pizza sauce across my face. I looked like the Joker.

I don't know that I would characterize the pizza as technically "good," or even, if measured by DiGiorno's standard against most delivery pizzas, "decent," but that sauce did make me imagine being 6 again, and since 6 was a good time for me, I can't pretend that I'm entirely unhappy I ate this thing.

But wait! There are still cookies! I baked them off, which really is incredibly convenient -- your oven is already hot, the dough is pre-scored so all you have to do is rip off the chunks and drop them onto a baking sheet.

I read the ingredients, hoping not to find any "cooked seasoned chocolate topping" or some such, and was kind of amazed that they were mostly recognizable as food -- the only gripes I can come up with is that they use shortening instead of butter and there's some high fructose corn syrup in there, but it's not like I don't have both of those things lying in my pantry anyway.

And while a warm cookie of even questionable wholesomeness can overcome most of my well-intentioned reservations, I have to say that these cookies are really pretty good. They have that crisp-melting-into-chewy thing down. The bottom crust rasps as you bite into it, and by the time your teeth close all the way, they feel just the slightest bit stuck together, in a good way. MILK! Give me some milk, and I am happy, beaten into submission by their charms. The fact that the peanut butter cookie actually tasted kind of like peanut butter was gravy, as far as I'm concerned. Sure, the chocolate chips are your average industrial chocolate -- sweet and nondescript. And if you really think too hard about it, you can catch the tinny, metallic taste of the baking powder. But, as I munched down on my third cookie with a little shot of milk, I started thinking that maybe Mom could have done with a little more convenience baking when we were kids.