While solidarity between soldiers and protesters kept things peaceful, things could take a turn for the worse 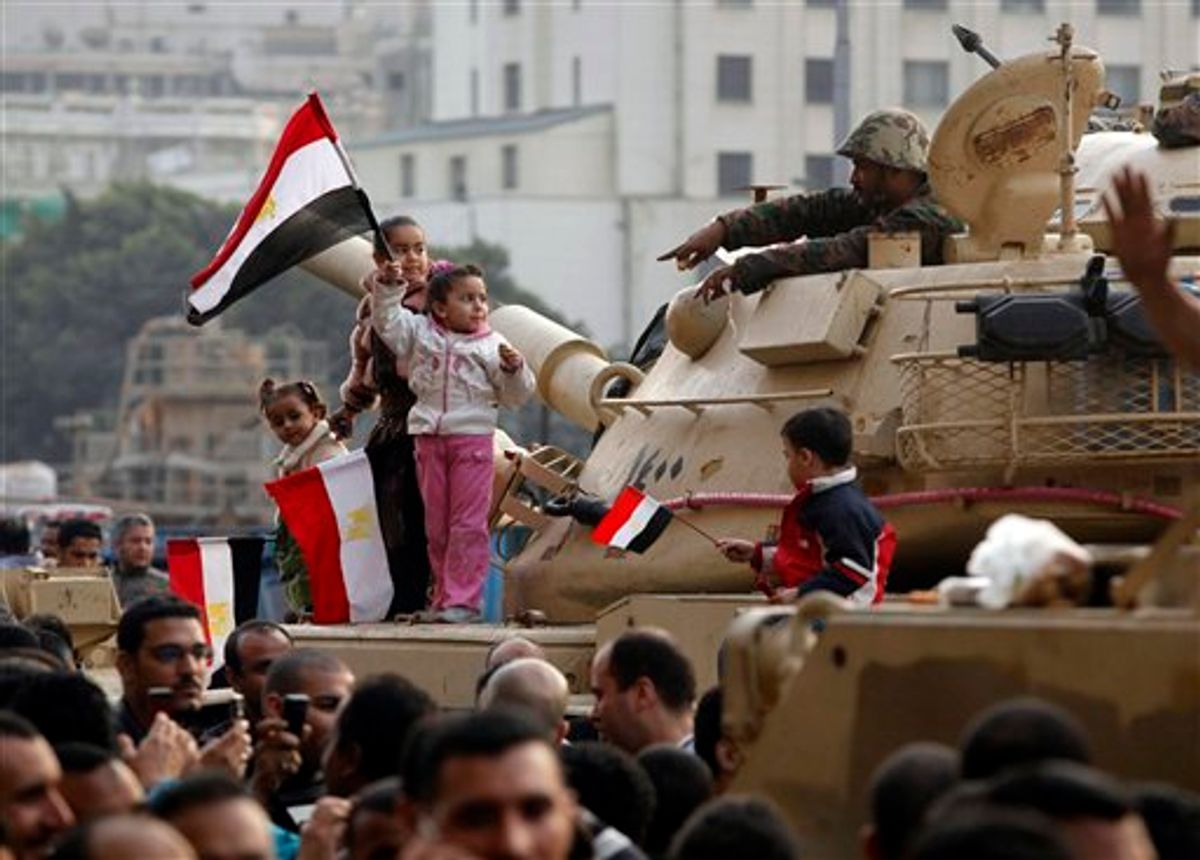 Young girls wave Egyptian flags atop an armored vehicle just outside Tahrir or Liberation Square in Cairo, Egypt, Tuesday, Feb. 1, 2011. More than a quarter-million people flooded into the heart of Cairo Tuesday, filling the city's main square in by far the largest demonstration in a week of unceasing demands for President Hosni Mubarak to leave after nearly 30 years in power. (AP Photo/Victoria Hazou) (AP)
--

The Egyptian military called Wednesday for an end to more than a week of demonstrations against President Hosni Mubarak, throwing its support behind his embattled regime hours after he defiantly rejected demands to step down immediately and said he would serve out his term in office.

The declaration was a clear shift in the stand of the army, which gave a tacit endorsement to the movement on Monday by saying it would not use force against protesters, and that they had legitimate demands.

Protesters formed a human chain at the northern end of Cairo's main square between the pro-Mubarak protesters and several thousand people calling for the president's ouster.

Traffic barriers and an army personnel carrier also stood between the two sides in the square, the epicenter of the protests against Mubarak.

The emboldened protesters brought more than 250,000 people into Cairo's main square Tuesday to demand Mubarak leave within days. The president responded before midnight with a statement pledging to serve seven more months in office and "die on Egyptian soil."

Representatives of his National Democratic Party immediately began making public statements trying to project the image of the regime as Egypt's sole path back to stability and security after the disruption of normal life caused by eight days of protests, and a wave of looting and arson that gripped the country over the weekend after the government pulled police from the street.

The army's message to the demonstrators had a more conciliatory tone, appealing to young protesters to stand down "out of love for Egypt."

"You have started coming out to express your demands and you are the ones capable of returning normal life to Egypt," military spokesman Ismail Etman said in an address on state television. "Your message has arrived, your demands have become known."

Immediately after his statement, state television ran a scrolling message reading: "The armed forces call on the protesters to go home for the sake of bringing back stability."

Internet service also began returning to Egypt after days of an unprecedented cutoff by the government, and state TV said authorities were easing a nighttime curfew, which now runs from 5 p.m. to 7 a.m. instead of 3 p.m. to 8 a.m.

Some pro-Mubarak protesters expressed fears of continuing shortages of food and other necessities if protesters in Tahrir Square didn't end demonstrations.

"I want the people in Tahrir Square to understand that Mubarak gave his word that he will give them the country to them through elections, peacefully, now they have no reason for demonstrations," said Ali Mahmoud, 52, who identified himself as middle-class worker from Menoufia, a Nile Delta province north of Cairo.

The presence of significant numbers of pro- and anti-Mubarak forces on the streets Ahmed Abdel Hamid, representing The Revolutionary Committee, one of several youth groups that organized the protests, said that the regime was going all out to pressure people to stop protesting.

"Starting with the emotional speech of Mubarak, to the closure of banks, the shortage of food and commodities and deployment of thugs to intimidate people, these are all means to put pressure on the people"

The movement against Mubarak is fueled by deep frustration with an autocratic regime blamed for ignoring the needs of the poor and allowing corruption and official abuse to run rampant.

After years of tight state control, protesters emboldened by unrest in Tunisia took to the streets on Jan. 25 and mounted a once-unimaginable series of protests across this nation of 80 million.

In his 10-minute address, Mubarak appeared somber but spoke firmly and without an air of defeat. He insisted that even if the protests demanding his ouster had never broken out, he would not have sought a sixth term in September.

He said he would serve out the rest of his term working "to accomplish the necessary steps for the peaceful transfer of power." He said he will carry out amendments to rules on presidential elections.

Mubarak, a former air force commander, vowed not to flee the country.

"This is my dear homeland," he said. "I have lived in it, I fought for it and defended its soil, sovereignty and interests. On its soil I will die. History will judge me and all of us."

The step came after heavy pressure from his top ally, the United States. Soon after Mubarak's address, President Barack Obama said at the White House that he had spoken with Mubarak and "he recognizes that the status quo is not sustainable and a change must take place." Obama said he told Mubarak that an orderly transition must be meaningful and peaceful, must begin now and must include opposition parties.

Earlier, a visiting Obama envoy -- former ambassador to Egypt Frank Wisner, who is a friend of the Egyptian president -- met with Mubarak and made clear to him that it is the U.S. "view that his tenure as president is coming to a close," according to an administration official, who spoke on condition of anonymity because of the delicacy of the ongoing diplomacy.

The United States has been struggling to find a way to ease Mubarak out of office while maintaining stability in Egypt, a key ally in the Mideast that has a 30-year-old peace treaty with Israel and has been a bulwark against Islamic militancy.

Mubarak would be the second Arab leader pushed from office by a popular uprising in the history of the modern Middle East, following the ouster last month of the president of Tunisia -- another North African nation.

On Wednesday morning in the capital, long lines formed at gas stations and bakeries. Fresh vegetables have all but vanished from Cairo, with farm producers from surrounding areas unable to ferry their goods to the city of 18 million people.

Some cars in Cairo had small papers stuck on their windscreen declaring 'Yes to Mubarak."

Michael Weissenstein and Diaa Hadid contributed to this report.