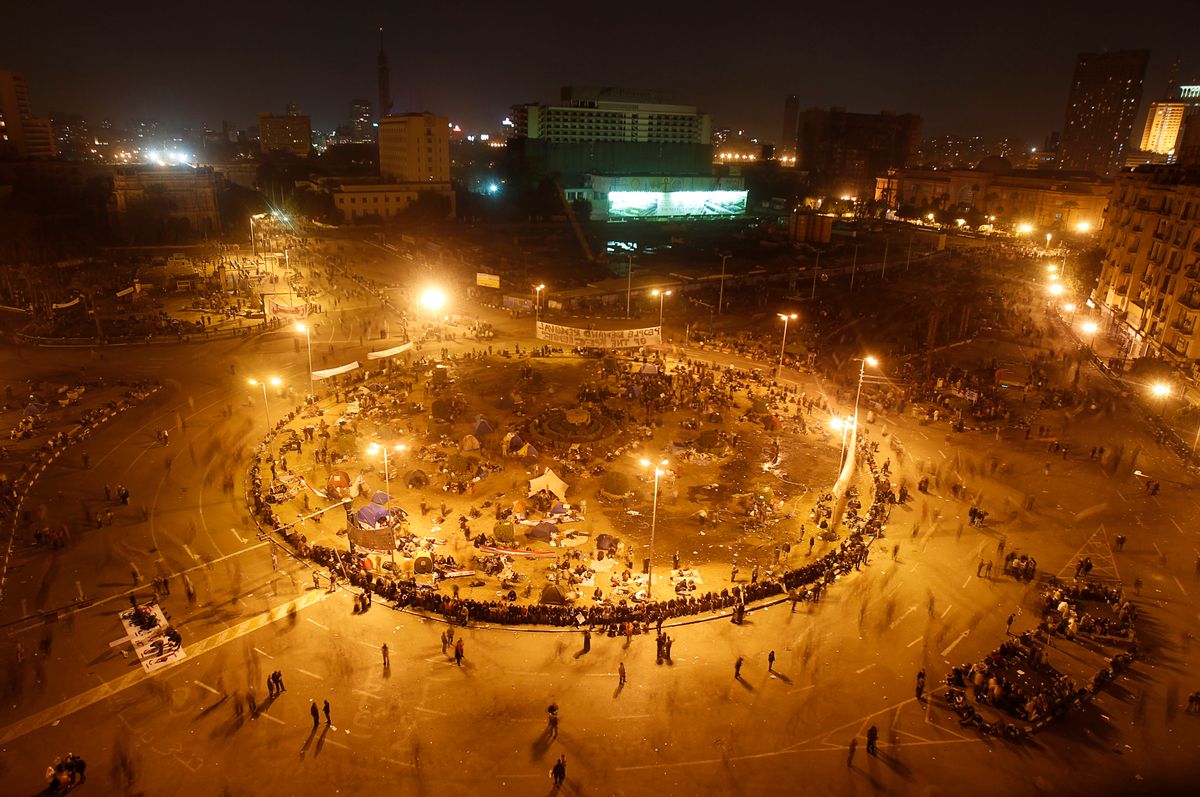 UPDATE (6:09 EST): CNN has released more footage of Anderson Cooper narrating his way through being attacked by protesters. Cooper tries to quell the mob by repeating ''Insha'Allah'' (If God wills it).

UPDATE (5:48 EST): Revolution fervor seems to be spreading across the Middle East. Yemeni President Ali Abdullah Saleh has declared that he will not seek another term--as a matter of public appeasement. Though Jordan's King Abdullah replaced his prime minister, the country is still besieged by protests.

UPDATE (5:11 EST): NBC’s Richard Engel was on "Hardball" with Chris Matthews. Matthews asked about how long the protests could continue -- from an economic standpoint (i.e., how long will there be supplies to keep this going with all the shops boarded up).

''At least for several more days. Protesters say even if they lose tonight -- and at this stage it doesn't look like they’re going to lose ... they will start again tomorrow. They were talking about gathering in another place, potentially marching on the presidential palace.''

UPDATE (5:03 EST): Protesters have congregated on a bridge near Tahrir Square. Trucks are engulfed in flames, between the barricaded factions.

Regrettably the time has come 4 Pres. Mubarak 2 step down & relinquish power. It’s in the best interest of Egypt, its people & its military.

UPDATE (4:10 EST): The CPJ (Committee to Protect Journalists) has released a list of journalists assaulted in Egypt. CPJ blames Mubarak's people: ''The Egyptian government is employing a strategy of eliminating witnesses to their actions.''

Anderson Cooper is cited among those harmed.

UPDATE (3:40 EST): Brian Williams was just on MSNBC, augmenting reports on gunfire near Tahrir Square. The NBC anchor said he heard protracted ''volleys'' of weapons discharging, followed by sirens from ambulances rushing to the scene. Williams called the scene in Egypt a ''clearly deteriorating situation after a remarkable day.''

Reports seem to indicate that violence in the square itself has died down, though clashes continue nearby.

The numbers have gone down in Tahrir Square but in the streets surrounding it clashes continue. Pro-democracy protesters have been urging people to join them there to help keep it in their hands.

CNN’s Ben Wedeman talked about reports that Mubarak supporters may have contributed to the violence today -- and rumors that these supporters were on the government payroll.

Per The New York Times:

Ben Wedeman, a CNN correspondent based in Cairo, just reported that several of the regime supporters he spoke with on Wednesday said that they worked for government-owned companies. He said that foreign correspondents in Egypt, where protests are normally banned unless they support the government, have long joked that Egypt seems to have a "Ministry of Spontaneous Demonstrations."

UPDATE (3:17 EST): Al-Jazeera reports that at least 100 people have been killed in the Egyptian street clashes.

UPDATE (2:55 EST): Speaking of protesters, the thawraegypt Youtube stream is constantly updating videos from people in the Egyptian streets.

UPDATE (2:46 EST): Angy protesters confront Christiane Amanpour. One dismisses her with ''We hate you,'' and ''We hate America.''

''The message that the president delivered clearly to President Mubarak was that the time for change had come,'' Gibbs said in the daily White House briefing.

NBC News correspondent Andrea Mitchell says that's diplo-speak for ''blunt and unmistakable,'' meaning the United States is telling Mubarak he has to go, no questions asked.

UPDATE (2:15 EST)
Press Secretary Robert Gibbs addressed the nation around 1 p.m. in Washington. As previously reported, the Obama administration is condemning the violence in Egypt and basically told Mubarak to step down. Of course, the contention with the Obama administration's handling of Egypt so far is how problematic just "basically" saying stuff to Egypt's stubborn President Mubarak is.

In response to Gibbs address, Robert Mackey of the New York Times said:

At a White House press briefing on Egypt, a reporter just asked if President Barack Obama's statement on Tuesday night, that "an orderly transition must be meaningful, it must be peaceful and it must begin now," meant that he would be satisfied with Hosni Mubarak remaining in power until September. White House Press Secretary Robert Gibbs responded, "now started yesterday."

Business Insider’s Joe Weisenthal suggested that the Gibbs press conference was evidence that the White House is "furious" at Mubarak for today’s clashes:

It's making Obama look bad, and The White House is furious. You can see it in the Robert Gibbs press conference that's happening right now.

The Huffington Post published an open letter from a White House reporter decrying the White House's handling of the Egypt situation. Here's an important point:

Prior to the President's statement Tuesday night, the press corps had not received a substantive update from the White House all day on the situation in Egypt. In addition, the press corps did not have an on-camera briefing, or an off-camera gaggle, with you yesterday to ask the White House about its decision-making process during this major foreign policy crisis. Now for two straight days the full press pool is being shut out of events that have typically been open and provided opportunities try to ask the President a question.

UPDATE (1:10 EST)
Numbers of protesters are dwindling and attacks are dying down. Nearly 500 people have been injured and at least one killed. In the lull of activity, pundits begin weighing in, and the effect of the Egyptian unrest on Israel is the hot topic. (Check out a full roundup of Egypt reactions here.)

This is a perilous time for Israel, and its anxiety is understandable. But I fear Israel could make its situation even more perilous if it succumbs to the argument one hears from a number of senior Israeli officials today that the events in Egypt prove that Israel can’t make a lasting peace with the Palestinians. It’s wrong and dangerous.

Salon's own Alex Pareene wonders what took Friedman so long to apply "his weird metaphors" to this global news event:

Tom is making a fairly uncomplicated point, as he generally is: Israel's senior leadership should try to take the peace process more seriously and strike a deal with the Palestinians, because a more representative Egyptian government will not be particularly sympathetic to an intransigent Israeli government that is not treating the Palestinian people very well. But he cannot make a simple point. His points must always be surrounded by complete nonsense.

Check out more coverage on the Israel angle in this AP article.

Just moments ago, press secretary Gibbs addressed the nation, saying "the time of transition is now." Here's another AP snippet detailing how the Obama administration is condemning the violence.

Still have questions about Egypt? Try the Q&A we put together yesterday.

UPDATE (12:25 EST)
The Associated Press recently released this raw footage of the violence in Cairo:

UPDATE (12:05 EST)
Fox News stopped covering Egypt a few minutes ago in order to broadcast the live announcement of the Daily, News Corp's iPad newspaper, according to a tweet by Brian Stelter of the New York Times. Meanwhile, protesters and allegedly paid pro-Mubarak thugs are hurling Molotov cocktails and heavy stones through the air in Tahrir Square.

The Mubarak supporters wield machetes, clubs, daggers and other weapons to attack anti-government protesters. According to the Guardian:

Both groups are pelting each other with rocks, it's extremely violent here...people are unsure about the army position...I don't see this coming to an end, it's been going on for hours now. There are hundreds of people injured, literally hundreds of people.

Today President Mubarak seems to have decided to crack down on the democracy movement, using not police or army troops but rather mobs of hoodlums and thugs. I’ve been spending hours on Tahrir today, and it is absurd to think of this as simply "clashes" between two rival groups. The pro-democracy protesters are unarmed and have been peaceful at every step. But the pro-Mubarak thugs are arriving in buses and are armed — and they're using their weapons.

UPDATE (11:15 EST)
Egypt is back online and tweeting. (We're following this Twitter list and this stream of updates from experts.) Al Jazeera is live-streaming the fighting on the streets. But watching from afar is increasingly frustrating as the government stays silent today.

The same tactics used in last Thursday's violent protests are resurfacing. State authorities are firing water cannons and tear gas canisters into the crowd. Just a few minutes ago, the army fired warning shots into the air at the perimeter of Tahrir Square.

UPDATE (10:54 EST)
Pro-Mubarak protesters are targeting journalists in Cairo's Tahrir Square. According to ground reports on Twitter, the aggressive pro-government factions are destroying photographers' cameras and cursing Al Jazeera. Earlier, anti-government protesters created a human chain to separate the main crowd of protesters from the approaching pro-government crowd. Mubarak's supporters promptly broke through and attacked the dissenters. Women wearing crash helmets are also running into the crowd to treat the injured, an estimated 500 and growing.

This morning, human rights activist and feminist Nawal El Saadawi commented on the solidarity between men and women in this past week's protests.

UPDATE (10:04 EST)
This morning, protests in Cairo reached a new level of violence in the wake of Mubarak's refusal to step down immediately. Pro-Mubarak forces -- allegedly paid mercenaries --- clashed with anti-Mubarak protesters. Some carried whips and rode horses and camels usually reserved for tourists. In a presumed act of betrayal, the Egyptian army also turned on the protesters for the first time.

Anderson Cooper took a punch to the head as he descended into the chaos. Attempting to get close to the action, Cooper said:

We never got that far. We were set upon by pro-Mubarak supporters punching us in the head ... The crowd kept growing, kept throwing punches, kicks ... Suddenly a young man would look at you and punch you in the face.