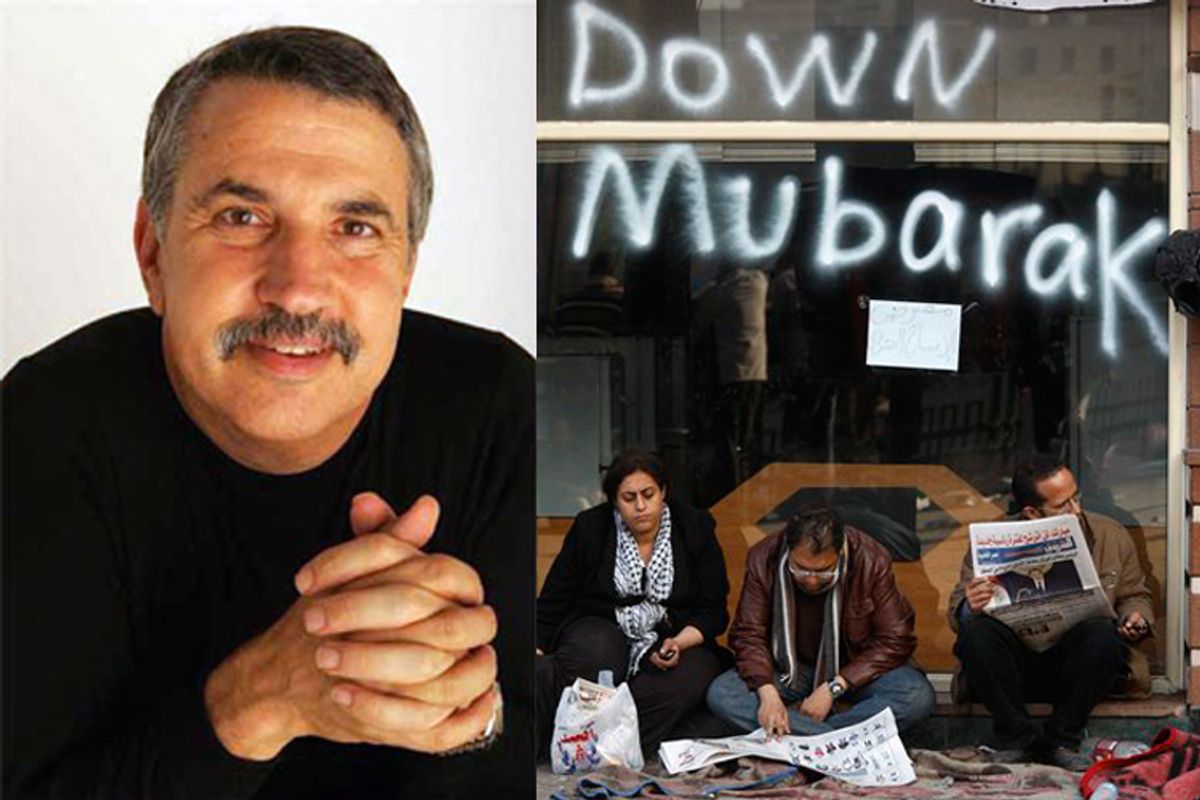 As soon as a mass popular uprising began rocking Egypt, New York Times columnist and Middle East expert Thomas Friedman leaped into action. After spending a couple more days at Davos, he went to Israel, where he spoke to "a retired Israeli general at a Tel Aviv hotel" and "a Tel Aviv University Strategist." Oh, and Palestine Prime Minister Salam Fayyad. All of these people get one fairly generic quote each.

Anyway, people in Israel are shocked (and awed) that Egypt's once-stable regime seems to be on the brink of collapse. No one in Israel saw this coming, and this is a huge deal, for Israel:

The peace treaty with a stable Egypt was the unspoken foundation for every geopolitical and economic policy in Israel for the last 35 years, and now it’s gone. It’s as if Americans suddenly woke up and found both Mexico and Canada plunged into turmoil on the same day.

Yeah, it'd be really, really weird here in the U.S. if Mexico was plunged into violence and upheaval. (The fact that neither Mexico nor Canada are 30-year-old autocratic regimes with a history of torture and violent repression is probably not important for this analogy.)

Tom is making a fairly uncomplicated point, as he generally is: Israel's senior leadership should try to take the peace process more seriously and strike a deal with the Palestinians, because a more representative Egyptian government will not be particularly sympathetic to an intransigent Israeli government that is not treating the Palestinian people very well. But he cannot make a simple point. His points must always be surrounded by complete nonsense.

For example: "Prime Minister Bibi Netanyahu of Israel is in danger of becoming the Mubarak of the peace process." I guess Tom means that Netanyahu is "in charge" of the peace process, and he should've negotiated when he had the most leverage, instead of waiting until things get out of hand, like Mubarak apparently has, but I'm not sure that someone can be the dictator of a "process." Was he planning on handing off the process to his son? Are the residents of the process going to storm the process's major cities? Does the peace process have American fighter jets and a secret police force?

These protests prove an important thing about Arabs that makes no sense:

What the turmoil in Egypt also demonstrates is how much Israel is surrounded by a huge population of young Arabs and Muslims who have been living outside of history — insulated by oil and autocracy from the great global trends. But that’s over.

I don't know what this means. Egypt has the Internet, and major world cities, and massive unemployment due in part to "global trends," and many young Egyptians attend college abroad, and they are basically as much a part of "history" as anyone else, anywhere. (And I see Conor Friedersdorf has already said all of this.)

I have a big problem with Friedman's central point. He writes: "I had given up on Netanyahu’s cabinet and urged the U.S. to walk away. But that was B.E. -- Before Egypt." That explains the piece's headline: "B.E., Before Egypt. A.E., After Egypt." But if Friedman had just written "Cairo," the headline could've been "B.C. and A.E.," and that dumb reference would've been marginally more clever. That's all I'm saying. Doesn't anyone edit this section?