In her new novel, Aminatta Forna probes the legacy of the African country's brutal, bloody history 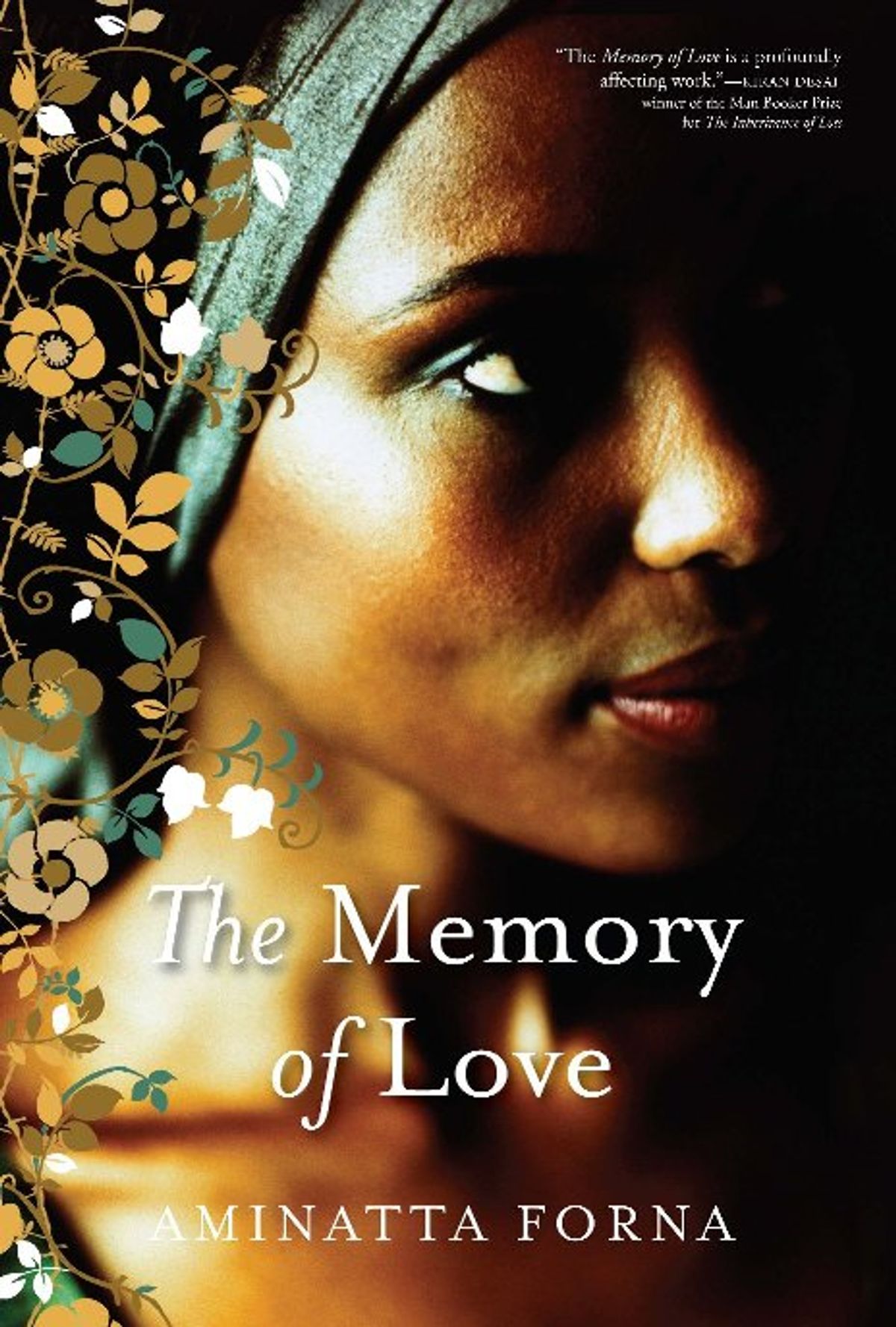 "The Memory of Love" by Aminatta Forna (Wendy)
--

If anyone requires proof of how profoundly this world has changed in the last 60 or 70 years, the city of Freetown in Sierra Leone might serve as a prime exhibit. Novelist Graham Greene was posted there as a British intelligence agent during World War II, and his famous descriptions in "The Heart of the Matter" (1948) branded it unforgettably on his readers' imaginations as a sleepy colonial backwater dominated by bored British functionaries. The country itself, "the soupsweet land," Greene portrayed as a place of benighted but real beauty.

Contrast this atmosphere with that of contemporary Freetown as depicted in Aminatta Forna's fine new novel "The Memory of Love." The capital is now a massive city full of decayed colonial infrastructure and burgeoning shantytowns. Still trying to recover from a long civil war of unprecedented brutality (1991-2002), Freetown's denizens attempt to rebuild lives that appear to have been shattered beyond repair. Now things are once again peaceful on the surface, but remembered horrors cannot be suppressed. And as with most wars, the survivors have to face not only the physical and mental injuries that have been inflicted on them but those they have inflicted, either passively or with malice, on others. A novel like this makes one understand just how trite the concept of "reconciliation," that word so freely bandied about by politicians, can be. The wounds, in so many cases, are too deep for a simple resolution.

It is not the first time Forna has delved into such issues: Her first book, "The Devil That Danced on the Water" (2002), explored the execution on trumped-up charges of her father, a Sierra Leonean cabinet minister and political activist, when she was only 11 -- events shrouded in mystery and fear throughout her childhood. By that time her parents had split up and she and her Scottish mother had moved to Britain, where Forna was educated; she eventually took a job in television broadcasting at the BBC. But she has maintained a strong connection with her natal country and paternal family, and continues to take part in family business and philanthropic ventures.

"The Devil That Danced on the Water" created a sensation in Sierra Leone, where the numerous "disappearings" and political murders that had taken place in the early years of Siaka Stevens' premiership were still forbidden subjects. Mohamed Forna, Aminatta's father, was part of a hopeful and progressive generation of young Africans, in the first decade after independence, who went to Europe or America for their studies and returned home to assume leadership positions in the new nations. Their idealism was soon dashed as one African country after another succumbed to cruel and exploitative dictators.

With "The Memory of Love" Forna shifts her focus from brave men like her father, willing to pay for their ideals with their lives, to their opposites: the men who survive and thrive by colluding with evil. It is 2003 and Elias Cole, an elderly university administrator, is slowly dying of pulmonary disease. As he fades from life he narrates his memories of the past 40 years to Adrian, an English psychologist. At first Elias' tale seems straightforward enough: He describes the ferment and political passions of the '60s, his firebrand friend Julius, his secret love for Julius' wife, Saffia, Julius' arrest and death in prison, and his own subsequent marriage to Saffia. But as the story progresses we realize that Elias is a perfect example of that literary archetype so hard for authors to pull off: the unreliable narrator. His version of events is a complex edifice of self-justification and lies of omission. Julius, the brave and joyful man, is dead, while cowardly Elias has lived on for joyless decades.

But these are distant memories; it is the more recent past that has blighted the new generation. According to one estimate, by the end of the civil war 90 percent of Sierra Leoneans were suffering from what the medical profession defines as post-traumatic stress disorder. When there is trauma on this scale, can it even be described as pathological or is it, quite simply, life? How can a whole population "recover"? Can the nation ever move on? Adrian, an English psychologist who has come out to Freetown to volunteer his help, finds himself dealing with apparently hopeless cases. There is Agnes, for instance, who finds her long-lost daughter only to discover that the young woman is now married to the sadistic officer who murdered her other child. There is Adecali, a pathetic man so tortured by the atrocities he committed as a member of the rebel army that he has landed in a mental hospital. And there is Kai, a young surgeon who becomes Adrian's closest friend: What Kai has undergone does not bear thinking about, and cannot be told even to Adrian.

And anyway, Adrian himself, for all his fine intentions, is a suspect character to these haunted citizens, for in postwar Freetown aid workers like Adrian have assumed the places vacated by Greene's parasitic colonials: They buzz around town in air-conditioned cars, live luxuriously, with staffs of servants, and generally behave as though they own the place and its inhabitants. Adrian is not of their ilk, but it is true that altruism is not his only reason for being in Sierra Leone: As Kai easily intuits, Adrian is there to escape his old life as well as to embrace a new one.

"The Memory of Love" is philosophically a rather complex novel, and Forna has wisely opted to present her material at a leisurely, measured pace. The slow movement suits the atmosphere she is attempting to transmit -- for despite all the changes that have overtaken the country, Forna's Sierra Leone is still recognizably Greene's soupsweet land:

In this country there is no dawn. No spring or autumn. Nature is an abrupt timekeeper. About daybreak there is nothing in the least ambiguous, it is dark or it is light, with barely a sliver in between. Adrian wakes to the light. The air is heavy and carries the faint odour of mould, like a cricket pavilion entered for the first time in the season. It is always there, stronger in the morning and on some days more than others. It pervades everything, the bed sheets, towels, his clothes. Dust and mould.

As this passage indicates, the author's visceral appreciation of her troubled country is evident on every page of "The Memory of Love." So, too, is her probing intelligence -- and her compassion.