Midwest buckles under storm, calls it a snow day 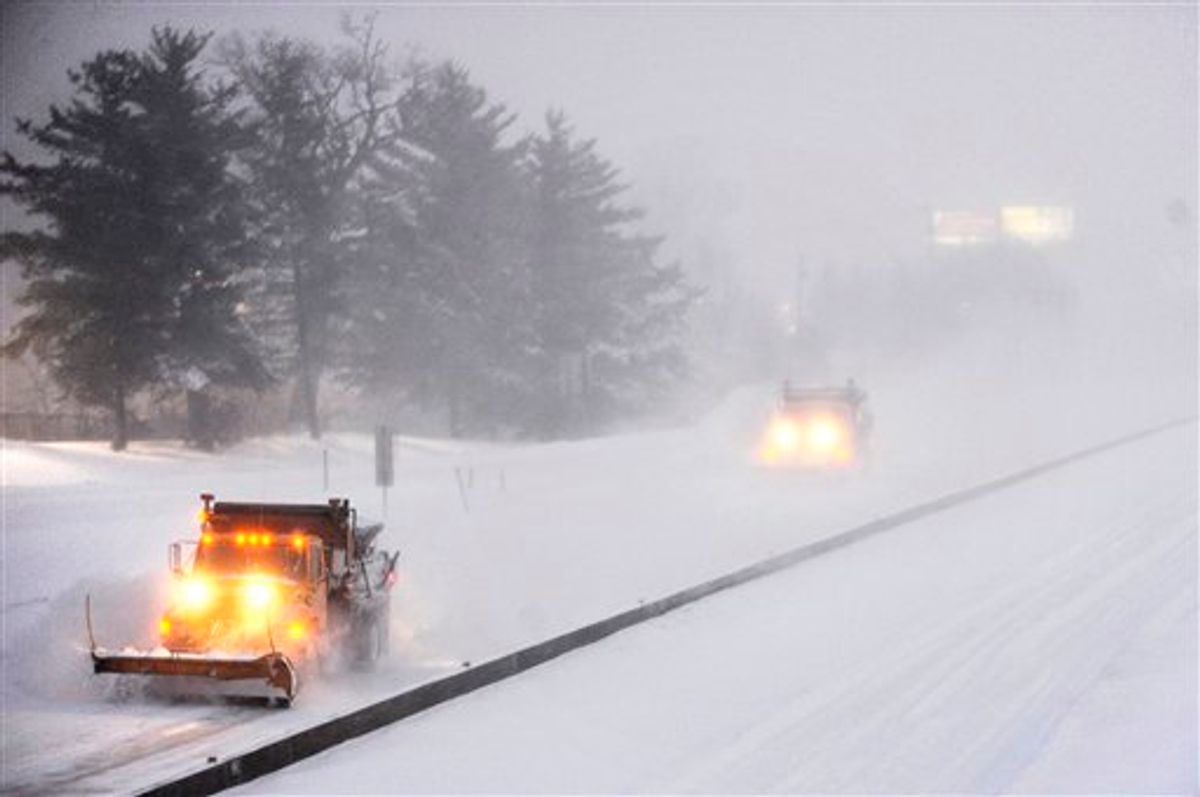 Snow plows drive westbound along Interstate 70 Tuesday, Feb. 1, 2011 in Columbia, Mo. Earlier in the day, the Missouri Department of Transportation closed Interstate 70 between Kansas City and St. Louis because of the storm, which is expected to dump between 18 and 24 inches of snow across mid-Missouri. (AP Photo/The Columbia Daily Tribune, Joshua A. Bickel) (AP)
--

A colossal blizzard roaring across a third of the country paralyzed the nation's heartland with ice and snow, leaving motorists stranded for hours and shuttering airports and schools as it barreled toward the Northeast.

The monstrous storm billed as the worst in decades delivered knock-out after knock-out as it made its way from Texas to Maine, bringing a huge swath of the country to a halt.

In New York, Mike Schumaker was already into his fourth hour of what he predicted would be a 24-hour plowing marathon as he cleared snow from a suburban Albany gas station around 5 a.m. Wednesday.

"I figure I'll be going to about 1 or 2 in the morning. That's my guess," said the 42-year-old private contractor from Latham.

"It's not so much about plowing as it is about to where to put it," he said. "We still have snow from Christmas that hasn't melted."

In Chicago, the city shut down Lake Shore Drive for the first time in years, an untold number of motorists stranded overnight after multiple car accidents on the iconic roadway.

And it wasn't over yet. Chicago received up to 17 inches of snow with more still possible, Missouri as much as 1 1/2 feet, more than a foot dropped on northern Indiana and Oklahoma has much as a foot. In the Northeast, spots in northern New York had already gotten more than a foot of snow. New York City was expected to get up to three-quarters of an inch of ice by midday before the mix of sleet and freezing rain warms up to rain.

Forecasters warn that ice accumulations could knock down some tree limbs and power lines. Ice also could affect transit service, even as plow drivers struggled to keep up with the snow on many roads.

"Nights like tonight stink because you clear a street and you turn around and you can't even tell you did anything," Kevin Briney said as he drove his plow through downtown South Bend, Ind., on Tuesday night.

More than 200,000 homes and businesses in Ohio began Wednesday without power, while in excess of 50,000 customers had no electricity in New Jersey and Pennsylvania, which were hit with mostly freezing rain and ice.

Federal Emergency Management Agency director Craig Fugate said the agency is on standby with generators, food, water and other supplies to help state and local authorities.

"The real heroes are these local responders going out in the storms and still rescuing people," he told ABC's "Good Morning America."

In Chicago, public schools were closed for the first time in 12 years. Crews were still trying to rescue some motorists Wednesday morning who had been stuck on Lake Shore Drive for 12 hours. It wasn't clear exactly how many motorists had been trapped, and some had abandoned their vehicles.

It was like, insane," one of the motorists, Frank Ercole, told WLS-TV. "No one knows anything. Everything's frozen."