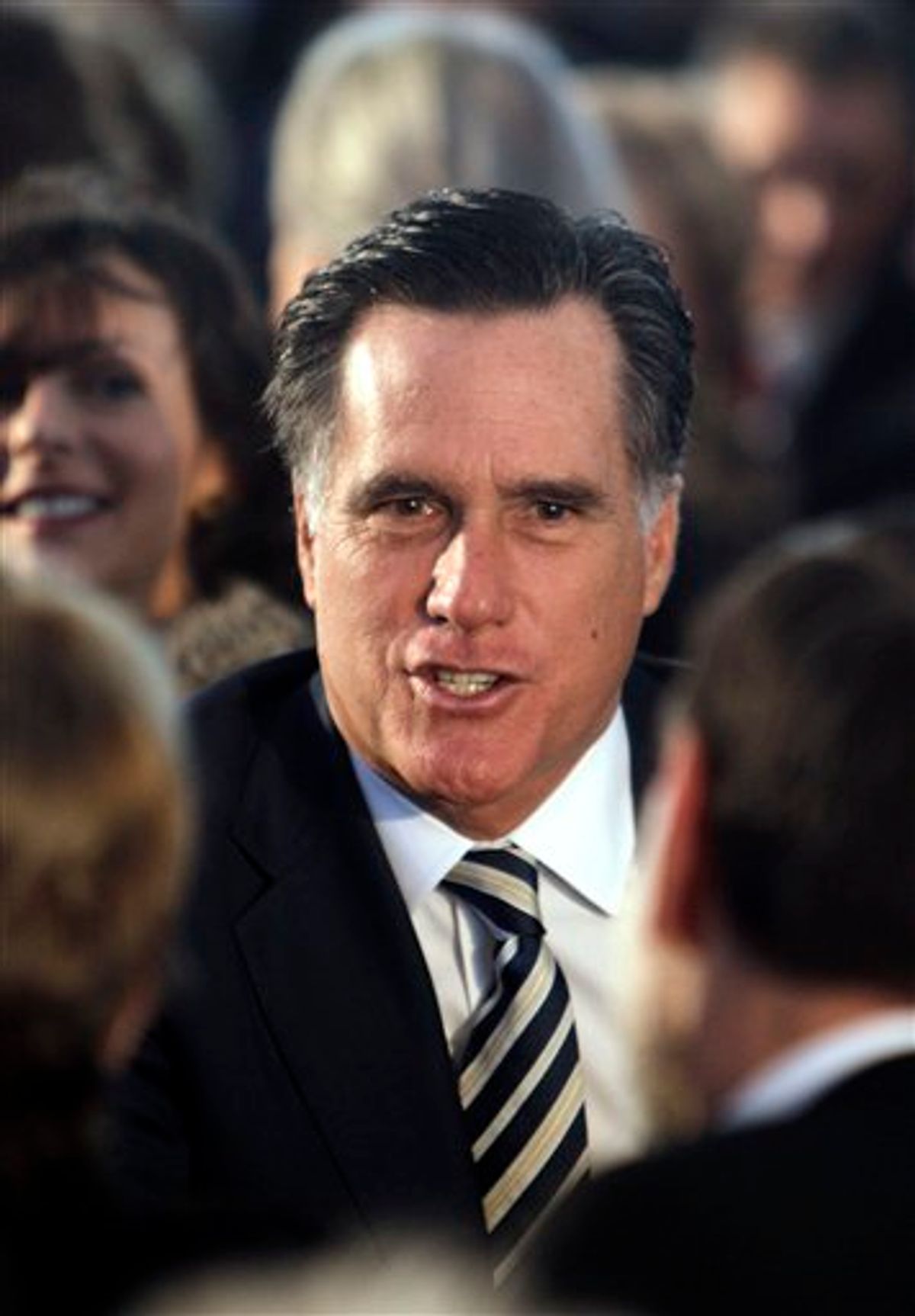 FILE - In this Nov. 16, 2010 file photo, former Mass. Gov. Mitt Romney is seen in Dallas. This month's early under-the-radar campaigning by potential Republican challengers to President Barack Obama is a reminder of something too easily forgotten: Running for president is harder than it looks, and Obama ultimately will stand against a flesh-and-blood nominee certain to make mistakes along the way. (AP Photo/LM Otero, File) (AP)
--

The day after President Obama's State of the Union speech, Mitt Romney appeared on Fox News' "Hannity" to offer his insights as to what the United States needs after two years of "the most anti-investment, anti-business, anti-jobs regimen we've seen probably [in] the last couple of decades." And as if that wasn't hurtful enough, Romney followed up with a slam aimed not only at Obama, but at all the other likely 2012 Republican candidates for president.

I don't know who else is going to get in the race but I do believe that it would be helpful if at least one of the people who's running in the Republican field had extensive experience in the private sector, in small business, in big business, working with the economy. Because frankly, not just solving the near term problems of unemployment, people not getting checks, is going to require someone with that experience, but also long term. We've got to have a strong economic foundation to make sure that we can stay ahead of the challenges we face, like a growing China and a militarily aggressive China.

Assuming Romney runs for president, which seems an absolute certainty at this point, even if he hasn't officially declared his candidacy, we're going to be hearing a lot more of his private sector über alles rhetoric over the next two years. And why not? America loves its successful entrepreneurs and businessmen. Their feats of profitable derring-do fuel a cherished Ayn Randian fantasy. Successful CEOs are gung ho leaders who make things happen! They're productive. They understand the bottom line. Anyone who pays close attention to the fountain of hypocritical, reality-challenged balderdash that vomits forth from politicians of both major parties in the U.S. every single day can be excused for lusting after a no-nonsense leader who, once installed in Washington, would pull off a miraculous turnaround and transform a sclerotic, trillions-of-dollars-in-debt monstrous bureaucracy into a lean, mean, profit-making machine. So how about it? Why can't we have a Steve Jobs or Henry Ford or Jack Welch in the White House?

Or, barring that, Mitt Romney? Because say whatever you want to about slick Mitt, there's no questioning the fact that, in contrast to the last (and only previous) president to sport a Harvard MBA, Romney can claim to be an extremely successful businessman. In his leveraged buyout days at Boston's Bain Capital, he made an awful lot of money.

Alas, governing the United States is a task fundamentally different from running either a small business or a Fortune 500 company. You could even argue that the qualities that make for a good CEO -- at least insofar as judged by American standards of capitalist success -- are manifestly useless when applied to the job of steering the federal government.

For starters, the president can't tell senators or representatives how to vote. When Bain Capital bought a beleaguered company, Romney and his cohorts would come in and do whatever they thought necessary to make it possible to resell the company for a huge profit in a year or two, and nobody had the power to stop them from executing their decisions. In corporate America, you follow orders or you get fired. There is no such thing as a filibuster, or a secret hold that prevents the CEO from appointing his or her own pick to a crucial position. Perhaps the single most frustrating thing that any business leader will discover very quickly after moving into the Oval Office is that on the most important issues, your power to make your will manifest is extremely limited.

Imagine how insane a micro-managing perfectionist like Steve Jobs would be driven if elected president? There is no perfection in government -- there are only less disastrous compromises. And that's without even getting into Jobs' notorious penchant for secrecy and absolute control over how Apple is perceived by the outside world, which, if applied to the U.S. government, would instantly make the United States more totalitarian than China.

A second big problem, specific to economic policy, is the question of what to do during an economic downturn. A corporation that sees costs rising and revenue falling tends to do the obvious easy thing -- lay off workers. This may make sense for an enterprise, but might not be the best policy for a president, who has to worry about the macroeconomic demand-depressing effects of higher unemployment. If Obama had fired hundreds of thousands of government workers immediately upon taking office he would not only  have contributed directly to increased economic hardship but he would at the same time have constrained the government's ability to provide services to its shareholders -- American citizens. A private corporation doesn't have to worry about keeping the country educated or the streets safe or buildings from burning down. But we do expect our government to do all these things.

When Jack Welch took over General Electric, one of his guiding rules was that GE had to close down or sell off any of its business units that did not rank first or second in its industrial niche. It's hard to imagine how a president of the United States would go about executing a similar strategy. Order Michigan or Nevada to secede from the union?

Given Wall Street's track record in creating the financial crisis, and the multinational CEO habit of seeking profit by offshoring workers and exploiting foreign markets, one could wonder why anyone would be touting private sector experience as a point of pride in 2011. One could even argue that the American CEO has the worst possible preparation for the job of president -- for switching from a job in which there is absolute power to serve a very narrow interest, to a position in which there is extremely limited power, but a mandate to serve the general interest. What we need are more politicians who understand the primacy of that general interest, instead of the principles by which profit is maximized via financial engineering or the exploitation of labor.