From the Pundits: The explosive uncertainty of the Egyptian uprising 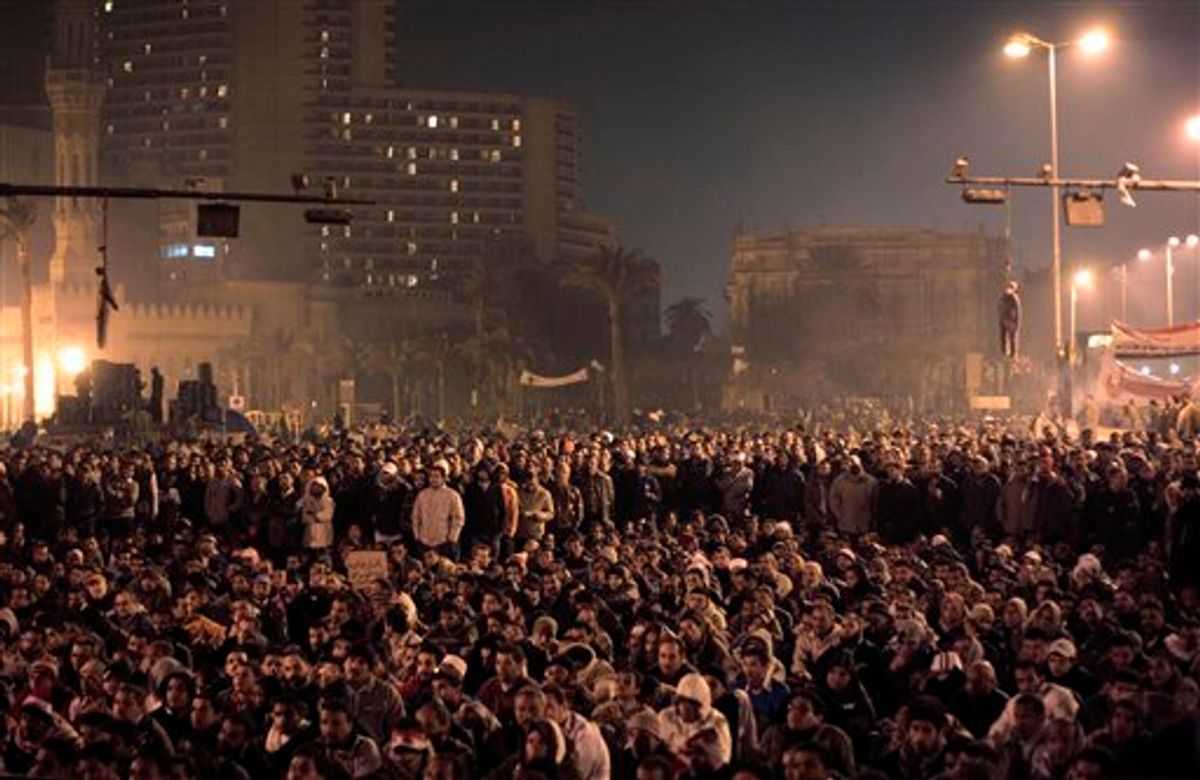 Effigies of Egyptian President Hosni Mubarak can be seen hanging from traffic lights, as Egyptian anti-government protesters gathered in Tahrir (Liberation) Square, watch U.S. President Barack Obama, not seen, live on a TV broadcast from Washington, speaking about the situation in Egypt, early Wednesday, Feb. 2, 2011. Egyptian President Hosni Mubarak announced he will not run for a new term in September elections but rejected protesters' demands he step down immediately and leave the country, vowing to die on Egypt's soil, after a dramatic day in which a quarter-million Egyptians staged their biggest protest yet calling on him to go. (AP Photo/Lefteris Pitarakis) (AP)
--

The uprising in Egypt remains both violent and unpredictable. Anti-government sentiment roiled under the surface in Egypt for years, but most viewed it as a nascent sort of dissent -- nobody foresaw such an explosive culmination so soon. Maybe its no surprise then that the reactions of pundits have been all over the map. We’ve rounded up some of the best for your perusal.

Chris Matthews and panelists discuss the developments in Egypt and consider the Obama administration’s response:

Thomas Friedman of the New York Times examines the impact of Egypt on the conflict between Israel and the Palestinians:

“Everything that once anchored our world is now unmoored,” remarked Mark Heller, a Tel Aviv University strategist. “And it is happening right at a moment when nuclearization of the region hangs in the air.”

This is a perilous time for Israel, and its anxiety is understandable. But I fear Israel could make its situation even more perilous if it succumbs to the argument one hears from a number of senior Israeli officials today that the events in Egypt prove that Israel can’t make a lasting peace with the Palestinians. It’s wrong and dangerous.

Shadi Hamid of the Los Angeles Times urges that U.S. policy in the Middle East cannot be guided fear of an Islamist regime:

Once again, the U.S. and its allies find themselves embracing the idea of democracy but not necessarily its outcomes. America is still grappling with its "Islamist dilemma." In 1992, the U.S. tacitly supported a military coup in Algeria that overturned a democratic election in which an Islamist party had gained a majority of the seats in parliament. The coup ended what was, at the time, the most promising democratic experiment in the Arab world. More recently, the George W. Bush administration buried its own "freedom agenda" after Islamists did surprisingly well in elections in the region, including in Egypt.

The fear of Islamists coming to power has long paralyzed U.S. policy. This has prevented bold American leadership in situations where it could have played a decisive role. Today, during the largest pro-democracy protests in Egyptian history, this same fear threatens to derail U.S. policy once again. Despite some nods to the demonstrators from the Obama administration, Egyptians still see the U.S. as holding out hope that the Egyptian regime, long a stalwart ally, might survive, reconstituting itself in a new guise.

This doesn't mean that Egyptians aren't right to demand their freedoms, that Bush was mistaken, that supporting Arab democratization is wrong. This doesn't mean Mubarak has to stay, or for that matter that it's imperative for President Barack Obama to pursue policies that put "stability" above "change." It does mean, though, that revolutions are dangerous. That change can also be change for the worse. That as the people of America move toward their next drama (perhaps over health care), the people of Egypt, and those of neighboring states, will be still stuck cleaning up the mess in Tahrir Square.

Revolutions can bring chaos, or failure, or even more oppression, or radical Islamization, or terrible violence. They create opportunity not just for the good guys (human rights activists) but also for the bad guys (Hezbollah, Iran). They take time and patience and determination and planning and, yes, caution. And while there's very little most observers can do to help them succeed, the least they can do is greet the revolution that is unfolding in their living rooms with wariness rather than a reality-show response of juvenile glee.

Josef Joffe of the New Republic compares Egypt to Iran in 1979, and says the former’s military -- a massive, self-interested bureaucracy -- could still be the trump card:

The most critical difference, however, is in the power structure. The Shah regime was as cancerous as the despot himself; there was the Peacock Throne surrounded by sycophants and nothing else. The army, though munificently equipped, was a shiny shell. I remember walking the streets of Tehran just before the Shah escaped. The people simply ignored the latest-model Centurion tanks posted at key intersections. Or they handed flowers to the bewildered conscripts. Even if the Shah had given the order, the machine guns would have remained silent.

Not so in Egypt. Amid all of the country’s familiar dysfunctionalities, one institution stands out: an army of 450,000. It is coddled, elitist, and respected. It controls vast swathes of the country’s economy, even the lucrative tourism business. Hence, it has a vast stake in the status quo—but not necessarily in the survival of Mubarak’s regime. If the 82-year-old president has to go, so be it.

Maybe Obama's early overtures planted a seed – as the passion of Reagan and Thatcher once did with many young people living under Communism – that is starting to bear fruit across the Muslim world. Maybe it is simply that modern communications, plus the similar politics, economics and demographics across the region, are combining to galvanise discontent. What is evident, though, is that Obama's words have gone with the grain of these societies in a way that the sermons of Bush and Blair did not.

Any social ferment of this order brings huge uncertainty. And it is embarrassing to watch Western leaders struggling to divest themselves of allies from a bygone age. But if you ask which American leader contributed more to the cause of change in the Muslim world, you might not agree – yet – that it was Barack Obama, but you could surely accept that George Bush set it back.

Barry Rubin of Aol presents a hypothetical in which the Muslim Brotherhood assumes power in the Middle East:

If the regime falls, it is far more likely than not that the results will be a catastrophe that is going to be compared to the Iranian revolution -- which set off the Iran-Iraq war and led to the taking of American diplomats as hostages, Iraq's invasion of Kuwait, the U.S. invasion of Iraq, a massive upsurge in revolutionary Islamism, the subversion of Lebanon and the rise of Hamas.