White House says U.S. "deplores and condemns the violence that is taking place in Egypt," as hostilities escalate 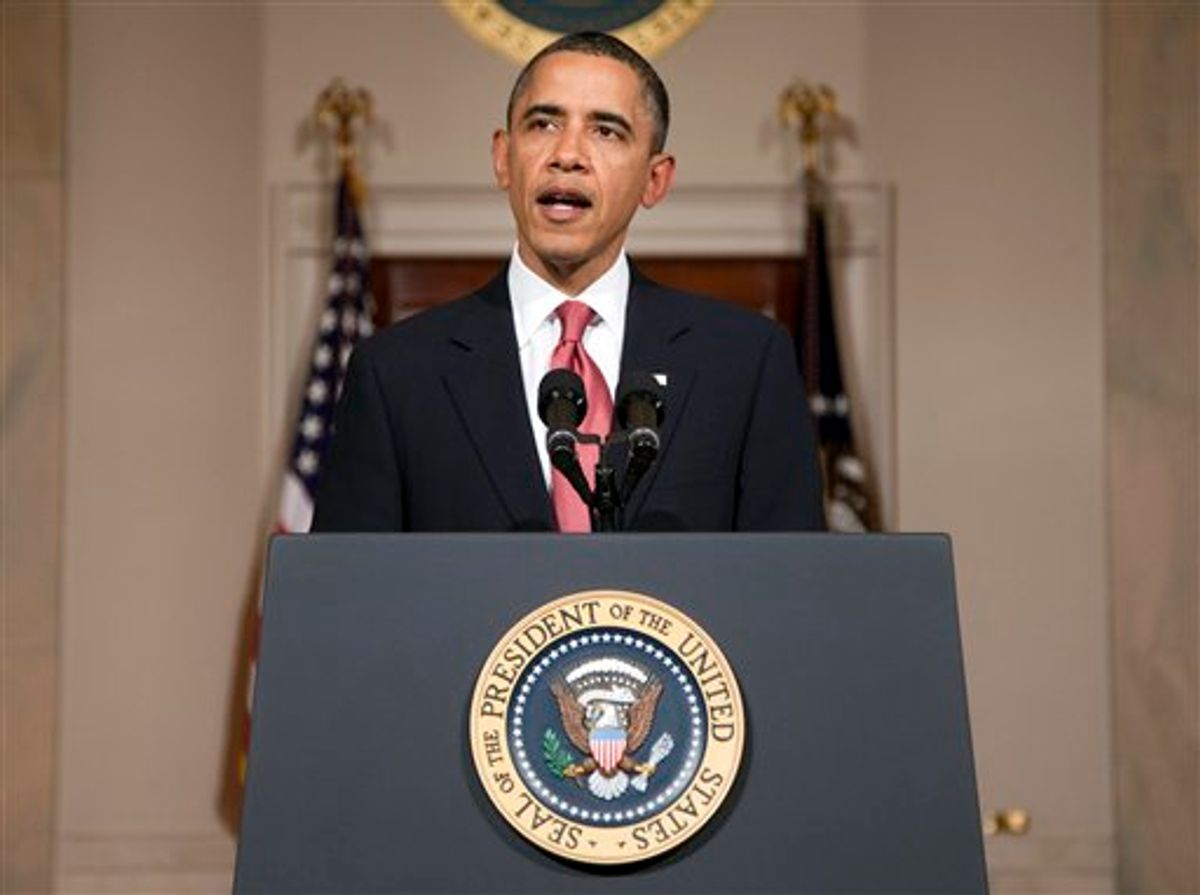 President Barack Obama speaks about the situation in Egypt in the Grand Foyer of the White House in Washington, Tuesday, Feb. 1, 2011. (AP Photo/Evan Vucci) (AP)
--

The United States criticized the government of President Hosni Mubarak and condemned violence in Egypt's capital as clashes between protesters and pro-government supporters demonstrated there would be no easy resolution to the unrest destabilizing America's closest ally in the Arab world.

A day after President Barack Obama pressed Mubarak to loosen his grip on power immediately, White House spokesman Robert Gibbs said the U.S. "deplores and condemns the violence that is taking place in Egypt."

"We are deeply concerned about attacks on the media and peaceful demonstrators," he added in a statement. "We repeat our strong call for restraint."

His comments came after the protests in Egypt's capital took a dangerous turn when several thousand Mubarak supporters, including some riding horses and camels and wielding whips, attacked anti-government protesters. In scenes of uncontrolled violence, some of the assailants were dragged to the ground by demonstrators and beaten bloody while the two sides rained stones and bottles down on each other.

"Egypt's path to democratic change must be peaceful," he said in a post to Twitter. He criticized the government over detentions and press restrictions. "The civil society that Egypt wants to build includes a free press."

The strife in Egypt was occurring a day after Obama prodded Mubarak to quickly loosen his grip on power, sternly telling the world that the longtime leader's transition from the presidency "must begin now."

Mubarak said Tuesday he would not seek re-election in balloting set for September. Yet he seemed determined to shepherd the political changeover from his authoritarian 30-year reign to an uncertain future.

The half-concession was angrily rejected by throngs of protesters in Cairo who say they are fed up with poverty and corruption and want him to step down immediately.

It also did not appear to satisfy Obama. After days of scrambling in the White House over how to react to the enormous and unanticipated protest movement, the president unmistakably sided with the demonstrators, even if he stopped short of demanding Mubarak's immediate resignation.

After speaking to the Egyptian on the phone for half an hour, the president offered high praise for the protesters and the Egyptian army. But Obama did not welcome or even directly mention Mubarak's announcement that he would not stand for re-election.

"An orderly transition must be meaningful, it must be peaceful, and it must begin now," he said.

And he had no kind words for Mubarak, though his Egypt has been critical to securing America's interests in the Middle East, including access to oil transport through the Suez Canal and a peace treaty with Israel under Mubarak's predecessor, Anwar Sadat.

Behind the scenes, the White House had attempted to nudge Mubarak to the exits over the past 48 hours, dispatching former U.S. ambassador to Egypt Frank Wisner as a special envoy to deliver a message to him: The U.S. saw Mubarak's tenure at an end, didn't want him to seek re-election and wanted him to prepare an orderly transition to real democracy.

"What's going on today -- recent events in Egypt and certainly in that broader region -- remind us all how crucial it is to have top-notch leadership on the ground and how quickly the ground can shift under our feet," she said.

"This is a critical time for America's global leadership," Clinton added. She said the United States needs to "be more nimble" in dealing with fast-paced international developments.