Terror, ruin but no deaths in huge Australia storm 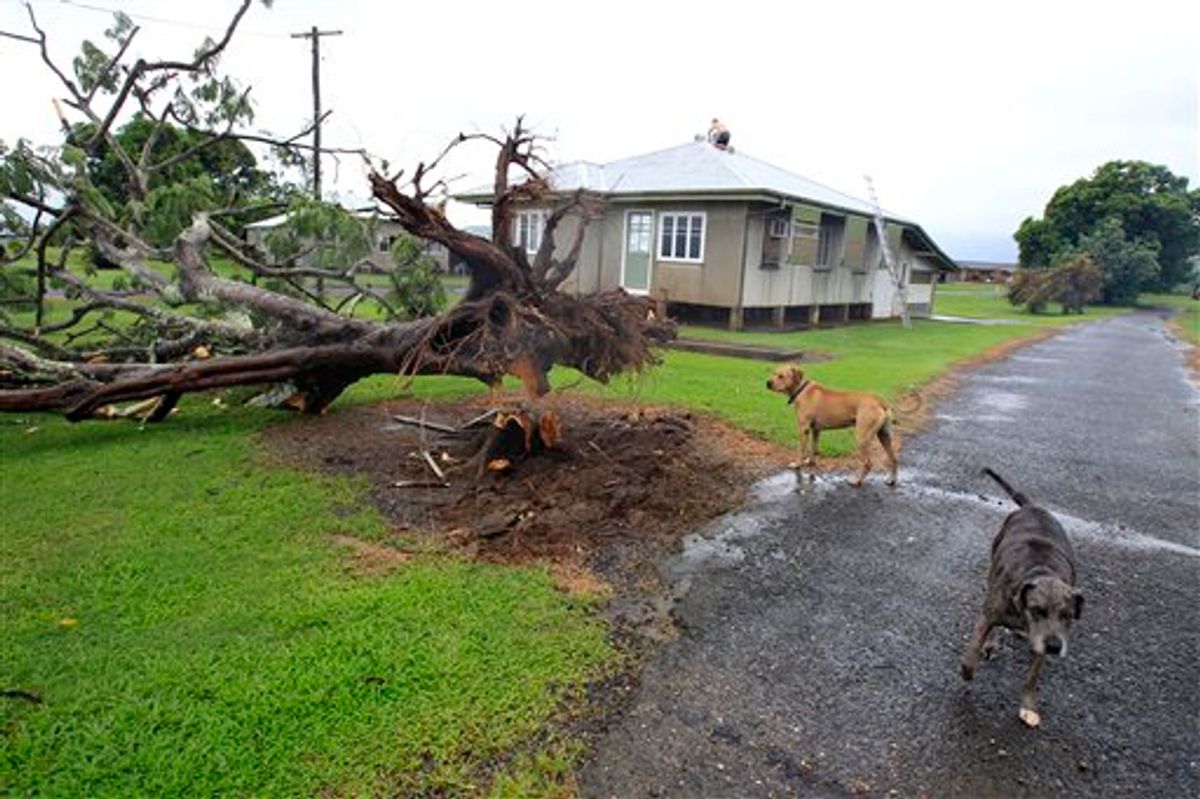 A man works to repair damage to the roof of his house while his dogs inspect a fallen tree in Kamma, Australia, Thursday, Feb. 3, 2011, after Cyclone Yasi brought heavy rain and howling winds gusting to 186 mph (300 kph). The massive cyclone struck northeastern Australia early Thursday, tearing off roofs, toppling trees and cutting electricity to more than 170,000 people, the most powerful storm to hit the area in nearly a century. (AP Photo/Rick Rycroft) (AP)
--

First came the terrifying roar, then a violent bang like something had exploded. "We gotta go!" David Leger screamed to his father as one of the most powerful storms ever recorded in Australia tore the roof off their home, sucking the air up and out of the room like a vacuum.

Leger and his parents scrambled down the staircase, but the house shook violently, sending 83-year-old Francis Leger tumbling down the stairs. The family finally made it to a small room on the ground floor, where they rode out the ferocious storm that slammed into the already flood-ravaged Queensland state Thursday.

"We're just thankful," David Leger said later as he slogged across the drenched carpet of their ruined home, water pooling around his sandaled feet. "This is only material."

Residents and officials were amazed and relieved that no one was reported killed by the monstrous Cyclone Yasi, which roared across northern Queensland with winds up to 170 mph (280 kph). Tidal surges sent waves crashing ashore two blocks into seaside communities, several small towns directly under Yasi's eye were devastated and hundreds of millions of dollars of banana and sugarcane crops were shredded.

Officials said lives were spared because, after days of increasingly dire warnings, people followed instructions to flee to evacuation centers or bunker themselves at home in dozens of cities and towns in Yasi's path.

Hundreds of houses were destroyed or seriously damaged, and the homes of thousands more people would be barely livable until the wreckage was cleared, officials said. Piles of drenched mattresses, sodden stuffed animals, shattered glass and twisted metal roofs lay strewn across lawns in the hardest-hit towns.

The region is considered a tourist gateway to the Great Barrier Reef, but whether the storm caused damage to the reef was not yet known. Experts say that cyclones can cause localized reef damage as they cross over and that under normal circumstances they will recover.

Yasi began weakening after it came ashore early Thursday. But it was still strong enough to threaten flooding late in the day in the Outback town of Mount Isa, about 500 miles (800 kilometers) inland.

It was a terrifying night for thousands who waited out the storm in their darkened houses. Sandy Haratsis was fighting off a panic attack as she lay on a mattress between her daughters' beds listening to the cyclone rage outside. The two-story wood house was shaking, and she was worried about the roof.

Suddenly, a bang rang out, followed by a whoosh. Her daughters screamed as raindrops began falling onto them through the ceiling. The roof was peeling away.

"That's it! Downstairs!" Haratsis shouted at her daughters and her 69-year-old mother Verna Kohn. They fled to a small ground floor room and spent the night sitting in a tight cluster on a bed of pillows, listening to the radio and praying the house would hold up.

"It was eerie and whistling and whirling and popping and girls screaming," Kohn recalled Thursday as she stood inside her waterlogged home.

Everything was drenched: the furniture, the carpet, her floral curtains, the stacks of hand-sewn quilts she'd spent years carefully crafting. On the ground floor, water dripped through the ceiling into saucepans and buckets scattered about. Half her roof had been torn away and the windows ripped off. A neighbor's palm tree lay across her yard.

The disaster zone was north of Australia's worst flooding in decades, which swamped an area in Queensland state the size and Germany and France combined and killed 35 people during weeks of high water until last month.

But the storm added to the state's woes, and was sure to add substantially to the estimated $5.6 billion in damage since late November. The government has already announced a special tax nationwide to help pay for the earlier flooding.

Queensland Premier Anna Bligh said several thousand people would be temporarily homeless, and Red Cross Australia and local governments were registering people in need and finding places to house them.

It would take days to make a proper assessment of the damage, and fatalities could yet emerge.

"It's a long way to go before I say we've dodged any bullets," Bligh said.

Emergency Services Minister Neil Roberts said initial assessments were that more than 280 houses were damaged in the three hardest-hit towns, and crews were unable to reach at least four others, so the tally would certainly rise.

Australia's huge, sparsely populated tropical north is battered annually by about six cyclones -- called typhoons throughout much of Asia and hurricanes in the Western hemisphere. Building codes have been strengthened since Cyclone Tracy devastated the city of Darwin in 1974, killing 71 in one of Australia's deadliest natural disasters.

"This was the worst cyclone this country has experienced, potentially, for 100 years, and I think that due to very good planning, a very good response ... we've been able to keep people safe," Roberts said.

Still, signs of devastation were everywhere. The main coastal highway was a slalom course of downed trees and power lines, fields of sugar cane and banana were shredded and flattened, and lush hillside forests were stripped of every leaf.

Rudy Laguna, 53, picked his way through the drenched rubble of a house he owns in Tully. The roof had peeled away, the windows were shattered and what was left of the siding flapped in the wind. He paused on the verandah and looked up at what was once the ceiling -- and saw nothing but cloudy sky.