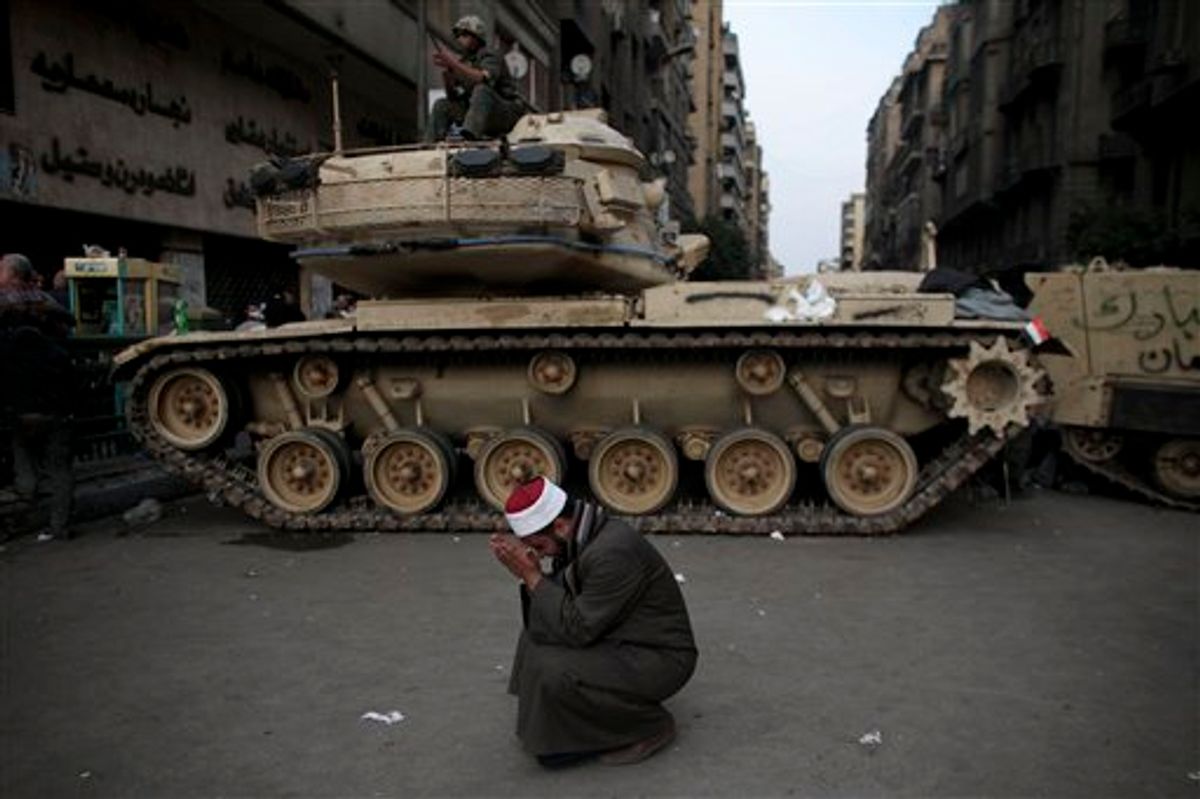 Heavy gunfire has erupted amid the clashes between regime supporters and anti-government protesters, and people have been seen carrying away at least one person.

Earlier today, Egyptian army tanks and soldiers cleared away pro-government rioters and deployed between them and protesters seeking the fall of President Hosni Mubarak, as the prime minister made an unprecedented apology for the assault by regime backers that turned central Cairo into a battle zone.

Prime Minister Ahmed Shafiq told state TV that the attack Wednesday on the anti-government protesters was a "blatant mistake" and promised to investigate who was behind it.

The protesters accuse the regime of organizing the assault, using paid thugs and policemen in civilian clothes, in an attempt to crush their movement. Government supporters charged central Tahrir Square Wednesday afternoon, sparking 15 hours of uncontrolled chaos, with the two sides battled with rocks, sticks, bottles and firebombs as soliders largely stood by without intervening.

The military began to move with muscle for the first time to stop the fighting early Thursday after a barrage of automatic gunfire hit the anti-government camp before dawn, killing at least three protesters in a serious escalation.

Four tanks cleared a highway overpass from which Mubarak supporters had hurled rocks and firebombs onto the protesters. Soldiers on the streets carrying rifles lined up between the two sides around 11 a.m. Several hundred other soldiers were moving toward the front line.

Thursday morning, more protesters streamed into the square, joining the thousands of defenders who spent the chilly night there, hunkered down against the thousands of government supporters in the surrounding streets.

A sense of victory ran through the protesters, even as they organized their ranks in the streets in case of a new assault. "Thank God, we managed to protect the whole area," said Abdul-Rahman, a taxi driver who spent the night in the square. "We prevented the pro-Mubarak people from storming the streets leading to the square." He refused to give his full name.

The apology by Shafiq, who was appointed by Mubarak over the weekend, was highly unusual from a leadership that rarely makes public admissions of a mistake. His promise to investigate who organized the attack came only hours after the Interior Ministry issued a denial that any of its police were involved.

The anti-Mubarak movement, which has carried out an unprecedented 10 days of protests bringing as many as quarter-million people into Tahrir, has vowed to intensify protests to force him out by Friday. In a speech Tuesday night, Mubarak refused to step down immediately, saying he would serve out the remaining seven months of his term -- a halfway concession rejected by the protesters.

The notion that the state may have coordinated violence against protesters, whose vigil in Tahrir Square had been peaceful for days, prompted a sharp rebuke from Washington, which has considered Egypt its most important Arab ally for decades, and sends it $1.5 billion a year in aid.

"If any of the violence is instigated by the government, it should stop immediately," said White House Press Secretary Robert Gibbs.