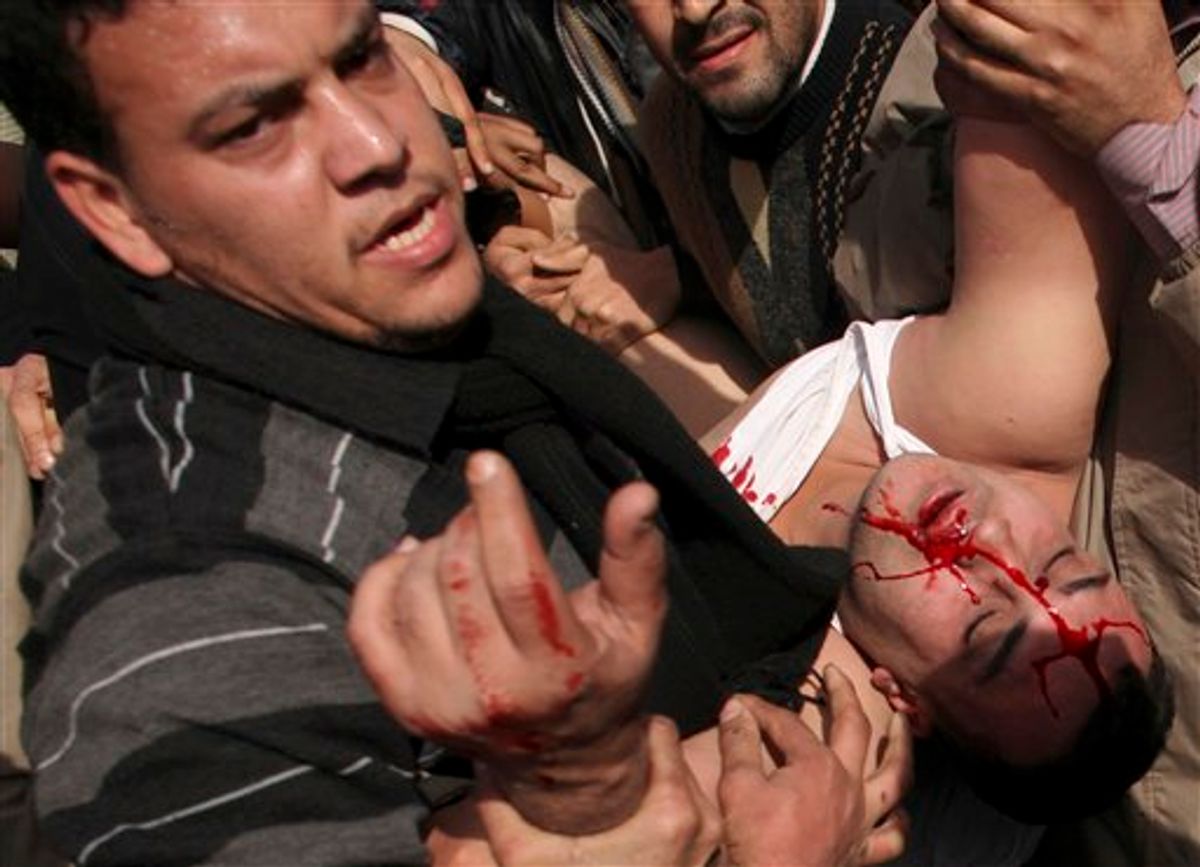 A suspected pro-government supporter, is carried away by anti-government protestors, in Cairo's main square, Egypt, Thursday, Feb. 3, 2011. Egyptian army tanks and soldiers moved to end violence between anti-government protesters and supporters of President Hosni Mubarak in Cairo's central square on Thursday after standing by for nearly a day as the two sides battled with rocks, sticks, bottles and firebombs. (AP Photo/Tara Todras-Whitehill) (AP)
--

Violence in protests comes in waves. As clashes ebbed from last Thursday's climactic marches, many hoped the worst was over. But yesterday, blood flowed in the streets of Cairo, Alexandria and Suez once again. Marching turned to pushing, which lead to tear gas attacks. Then rock throwing turned to fist swinging, which ultimately lead to bullet firing.

In many frustrating ways, there seems to be little we can do on this side of the Atlantic. At least for the damage already done.

WARNING: Some of these photos and videos contain graphic images.

Mubarak loyalists charged into crowds like a cavalry yesterday in Cairo. Some believe the pro-government thugs were paid mercenaries encouraged by the state police to stoke the chaos. (Russia Today)

A police vehicle plows through a crowd of protesters. (Al-Jazeera) An anti-government protester stands atop a barricade in Cairo's main square. (AP/Sebastian Scheiner) A group of soldiers pass by anti-government protesters near Tahrir Square. Egypt's prime minister apologized for the attack by regime supporters on anti-government protesters in central Cairo, vowing to investigate who was behind it. The protesters accuse the regime of sending a force of paid thugs and policemen in civilian clothes to attack them with rocks, sticks and fire bombs to crush their movement to oust Mubarak. (AP/Sebastian Scheiner) As if characters in an action movie, pro-government demonstrators on horses, camels and horse-drawn carriages retreat back past a police truck that was burned in last week's clashes near Tahrir Square. (AP/Ben Curtis) Mubarak loyalists watch cars burn in Tahrir Square. Thousands of supporters and opponents of Mubarak rained stones, bottles and fire bombs on each other in scenes of unmitigated violence as soldiers stood by without intervening. (AP/Lefteris Pitarakis) The violence continued through the night and into early hours on Thursday. (AP/Lefteris Pitarakis) Anti-government demonstrators wait to be treated at a makeshift medical triage station, near Tahrir square.(AP/Lefteris Pitarakis) An Egyptian Muslim cleric cries in front of on army tank in Tahrir, or Liberation square. (AP/Tara Todras-Whitehill)