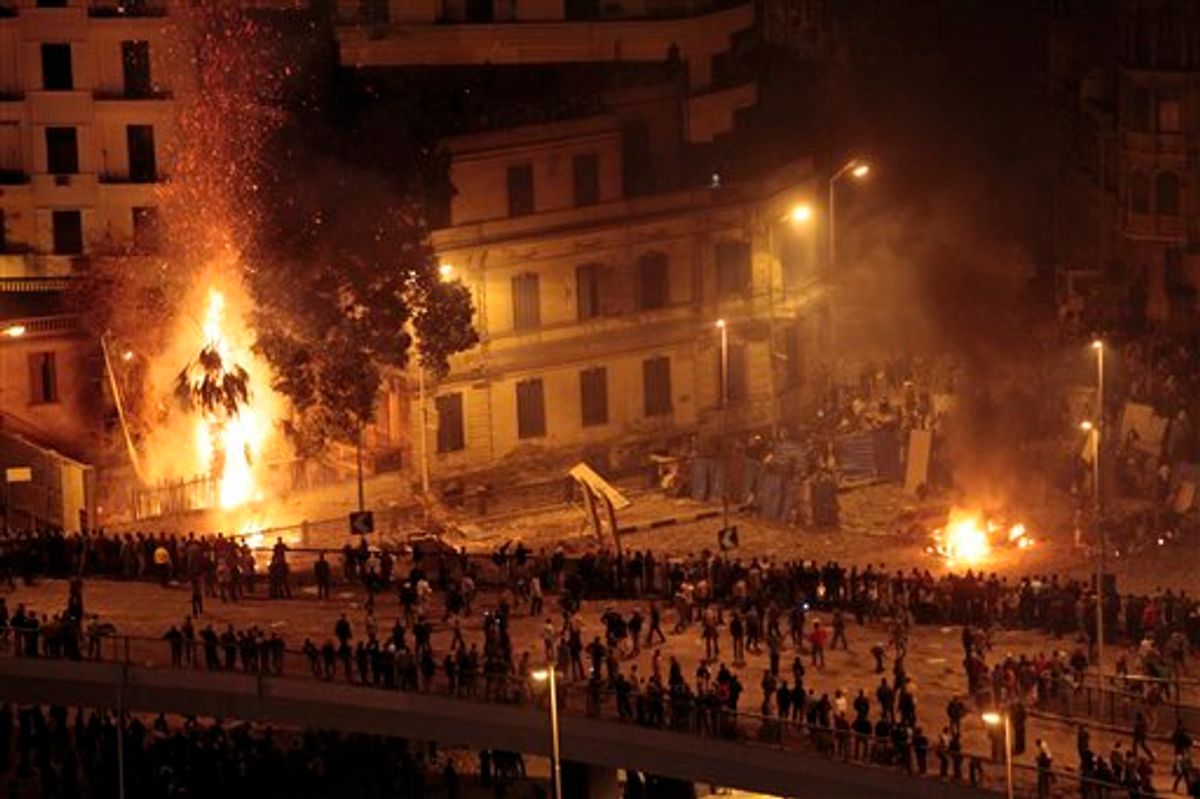 Pro-government demonstrators, bottom, clash with anti-government demonstrators, top right, as a palm tree burns from a firebomb, in Tahrir Square, the center of anti-government demonstrations, in Cairo, Egypt, early Thursday, Feb. 3, 2011. Thousands of supporters and opponents of Egyptian President Hosni Mubarak battled in Cairo's main square all day Wednesday, raining stones, bottles and firebombs on each other in scenes of uncontrolled violence as soldiers stood by without intervening. Government backers galloped in on horses and camels, only to be dragged to the ground and beaten bloody. (AP Photo/Lefteris Pitarakis) (AP)
--

Egyptian authorities forced Vodafone to broadcast government-scripted text messages during the protests that have rocked the country, the U.K.-based mobile company said Thursday.

Micro-blogging site Twitter has been buzzing with screen grabs from Vodafone's Egyptian customers showing text messages sent over the course of the protests against Egyptian President Hosni Mubarak's 30-year-old regime.

A text message received Sunday by an Associated Press reporter in Egypt appealed to the country's "honest and loyal men to confront the traitors and criminals and protect our people and honor." The sender is identified only as "Vodafone."

Vodafone Group PLC said in a statement that the texts had been scripted by Egyptian authorities. The company said authorities had invoked emergency rules to draft the messages, whose content it said it had no ability to change.

"Vodafone Group has protested to the authorities that the current situation regarding these messages is unacceptable," the statement said. "We have made clear that all messages should be transparent and clearly attributable to the originator."

Vodafone said the texts had been sent "since the start of the protests," which kicked off more than a week ago. Vodafone did not immediately return an e-mail asking why the company waited nearly 10 days to complain publicly. Its statement was released only after repeated inquiries by the AP.

Vodafone has already come under fire for its role in the Internet blackout that cut Egypt off from the online world for several days. The company said the order to pull the plug on its Egyptian customers could not be ignored as it was legal under local law.

Vodafone claimed that its competitors -- including Mobinil and the United Arab Emirates' Etisalat -- had also sent similar messages to their customers.

Etisalat, known formally as Emirates Telecommunications Corp., declined to comment when asked about the text messaging. The Abu Dhabi-based company is majority owned by the UAE government.

Adam Schreck in Kabul contributed to this report.