As hired thugs plow into the peaceful demonstrators in Tahrir Square, I realize why we must keep fighting 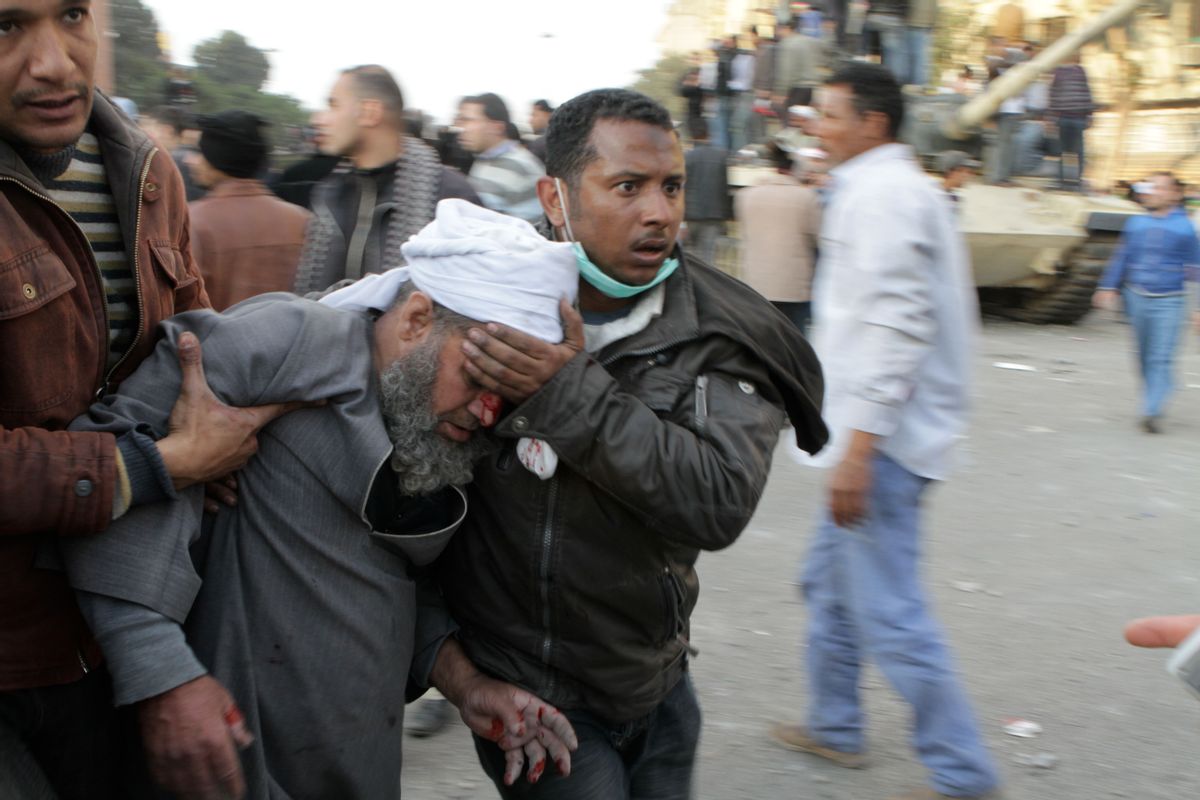 A strange peculiarity about the Egyptian regime is its insistence on attempting to retain a veneer of legitimacy -- even after 30 years of flagrantly falsified elections, torture, corruption and, most recently, an ill-advised Internet blackout that succeeded in making Egypt a trending topic on Twitter.

It's a habit they clearly find difficult to shake off. We woke up Wednesday to the news that thousands of "pro-Mubarak supporters" had gathered in the Mostafa Mahmoud Square, Cairo (incidentally the scene of the 2005 massacre of over 30 protesting Sudanese refugees by security bodies). I arrived at Tahrir Square around 3 p.m. The atmosphere in the area around the central grassy area was peaceful and positive, as it had been on Tuesday when tens of thousands congregated.

Down the road however in Abdel Munim Riad Square Square, next to the Cairo Museum, just beyond a couple of tanks stood a dense crowd of people, clearly separated from the Tahrir protestors. I stood on top of a building and watched as suddenly the pro-Mubarak protestors burst through the tanks and towards Tahrir Square. There was something incredibly unsettling about this assault, conducted as it was on camels, and on the short-tailed skinny horses tourists ride around the pyramids. The brutality of it all, as the terrified animals mowed down protestors and their riders hit out with their whips at anyone who crossed their path and people were crushed underfoot.

The use of hired thugs is classic Mubarak. The regime's relationship with its people has always depended on intimidation and violence, which proved problematic with the wave of demonstrations and labor protests that have been a growing phenomenon since 2003 -- acts of public police rage tend to put the tourists off. In the 2005 elections, it's widely believed that young men were paid to sexually assault female protestors. Last year during the trial of two policemen accused of involvement in the death of Khaled Said a rowdy group of teenagers stood outside the courtroom and accused anti-torture protestors of being Israeli spies, before launching missiles at them. During the elections boys in matching t-shirts danced in front of polling stations while burly colleagues intimated voters on behalf of National Democratic Party candidates.

The idea is that these groups of men -- who receive a modest daily stipend for their services -- can execute regime orders without their actions being directly attributable to them. In the current scenario we are meant to believe that after four days of absolute silence peaceful pro-Mubarak protestors so irrevocably moved by the president's speech and his promise not to stand for another term decided to organize mass counter protests. And attend these protests on camels and horses. And launch rocks and Molotov cocktails at camping Tahrir protestors whose only act of physical aggression has been against litter in the camp.

Purely coincidentally, the Internet was turned back on in Egypt on the day these millions of Mubarak "loyalists" decided to take to the streets, so the whole world can see the love and respect he commands.

They are a sad, troubled knot of poverty, miseducation and anger, these hired fists, some of them reportedly recruited today for LE 50 (according to activists speaking to thugs detained by anti-government protestors).

More than anything they are a reminder why, no matter what the cost to protestors and to Egyptians struggling to accept the interruption to daily life, the Tahrir occupation must continue. An NDP promise cannot be trusted, and if every last bit of the NDP is not removed Egypt will never heal.

Mubarak's regime is a cancer that has metastasized and spread to every part of Egyptian society. It has stripped the act of earning a living of its nobility and cheapened the currency of dreams; on our way home we talked to a taxi driver who expressed support for Mubarak. We asked him how exactly he had benefited from Mubarak's rule and he said "stability" -- not opened up new horizons for his children, not given him the opportunity to consider a life of doing something other than taxi driving. Mubarak has simply ensured that Egypt does not enter into external conflict while declaring a war of never-ending grinding attrition on his own people.