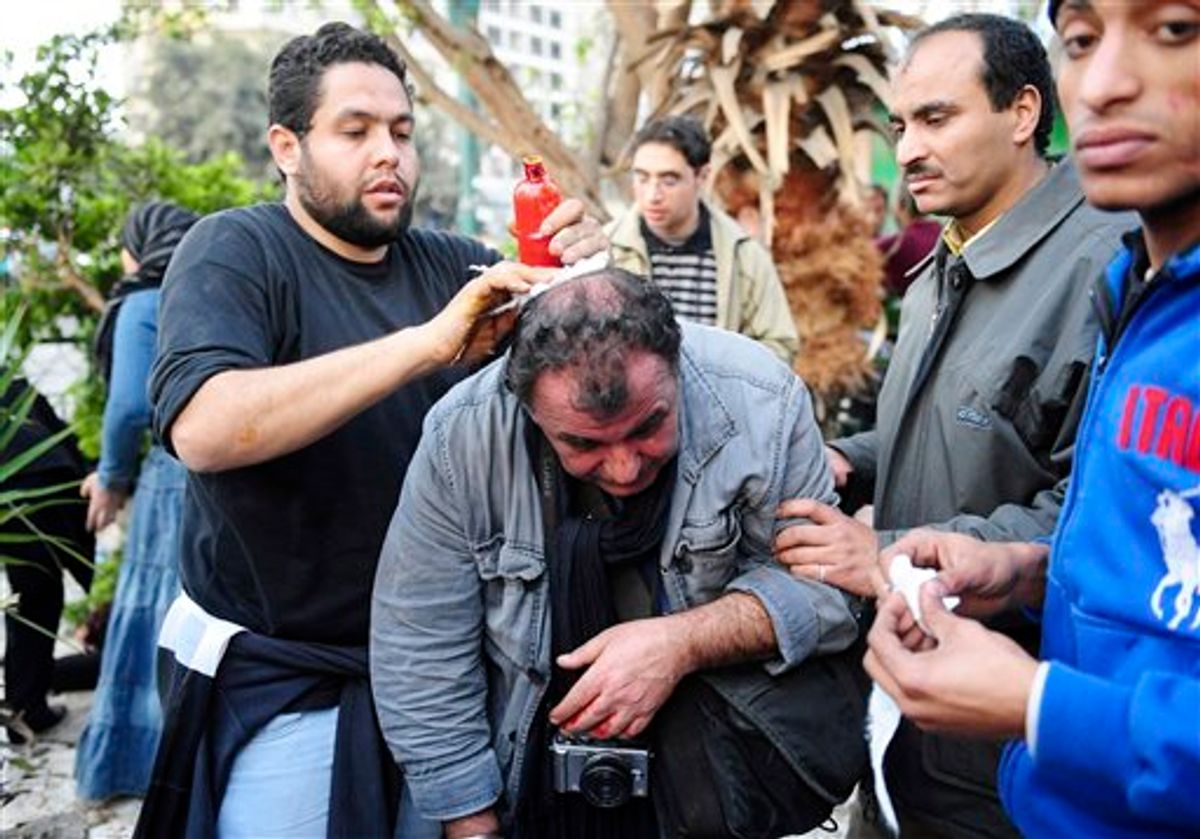 The Egyptian military rounded up journalists on Thursday after they came under attack from supporters of President Hosni Mubarak who have been assaulting anti-government protesters.

The U.S. State Department condemned what it called a "concerted campaign to intimidate" foreign journalists in Egypt.

State Department spokesman P.J. Crowley said via Twitter that the campaign against journalists is intended to interfere with their reporting, and "we condemn such actions."

The leaders of France, Germany, Britain, Italy and Spain said in a joint statement that the "attacks against journalists are completely unacceptable."

Foreign photographers reported a string of attacks by Mubarak supporters near Tahrir Square, the scene of battles between supporters of Mubarak and protesters demanding he step down after nearly 30 years in power.

The Greek daily newspaper Kathimerini said its correspondent in Cairo was hospitalized with a stab wound to the leg after being attacked by pro-Mubarak demonstrators in central Tahrir Square. He has been released. A Greek newspaper photographer was also beaten.

The injured journalist, Petros Papaconstantinou, said on Kathimerini's website that: "I was spotted by Mubarak supporters. They ... beat me with batons on the head and stabbed me lightly in the leg. Some soldiers intervened, but Mubarak's supporters took everything I had on me in front of the soldiers."

A Greek freelance photographer was punched in the face by a group of men who stopped him on the street near Tahrir Square and smashed some of his equipment.

Associated Press spokesman Paul Colford said that "AP journalists in Egypt have faced the same harassment and intimidation as other news organizations."

One Associated Press location was disrupted by men wielding sticks, and satellite equipment was taken.

"The situation was quickly defused," Colford said. "No one was injured."

Eight foreign journalists were seen being detained by the military near the prime minister's office, not far from Tahrir Square.

Turkey's state broadcaster TRT, said its Egypt correspondent, Metin Turan, was beaten by a group of around 15 pro-Mubarak demonstrators with batons and lost a tooth in the attack. His camera, money and cell phone were stolen.

Three other Turkish journalists were also stopped and roughed up near Tahrir square, TRT said.

Polish state television TVP said that two of its crews were detained in Cairo.

One of the teams, consisting of two cameramen, has been since released but one camera was smashed during a search of their car, TVP Info acting head Piotr Krysiak said.

All their documents and mobile phones were seized during the brief detention near the Tahrir square, but they have been returned, Krysiak said.

Krysiak could not say whether the other team, reporter Piotr Gorecki and two assistants, has been released. He had no details of the circumstances of their detention.

The Arabic-language satellite channel Al-Arabiya pleaded on an urgent news scroll for the army to protect its offices and journalists.

The Egyptian government has criticized media outlets of being sympathetic to protesters who want Mubarak to quit now rather than complete his term.

Government spokesman Magdy Rady said Wednesday that the assertion of state involvement in street clashes and attacks on reporters was a "fiction," and that the government welcomed objective coverage.

"It would help our purpose to have it as transparent as possible. We need your help," Rady said in an interview with The Associated Press. However, he said some media were not impartial and were "taking sides against Egypt."

The Qatar-based pan-Arab broadcaster Al-Jazeera said on a news scroll that two of its correspondents had been attacked by "thugs." It didn't say when the attack took place, or how badly they were hurt.

Egyptian authorities had shut Al-Jazeera's office on Sunday, complaining its round-the-clock coverage was slanted toward protesters and could encourage more unrest.

CNN's Anderson Cooper said he, a producer and camera operator were set upon by people who began punching them and trying to break their camera in central Cairo on Wednesday. Another CNN reporter, Hala Gorani, said she was shoved against a fence when demonstrators rode in on horses and camels, and feared she was going to get trampled.

"This is incredibly fast-moving," Cooper said. "I've been in mobs before and I've been in riots, but I've never had it turn so quickly."

In Wednesday's fighting, security forces did not intervene as thousands of people hurled stones and firebombs at each other for hours in and around the capital's Tahrir Square.

There were reported assaults on journalists for CBS, the BBC, Danish TV2 News, Swiss television and Belgium's Le Soir newspaper, among other organizations. Two Associated Press correspondents were also roughed up.

A reporter for Turkey's Fox TV, his Egyptian cameraman and their driver were abducted by men with knives while filming protests Wednesday, but Egyptian police later rescued them, said Anatolia, a Turkish news agency.

A correspondent and a cameraman working for Russia's Zvezda television channel were detained by men in plainclothes and held overnight Tuesday, Anastasiya Popova of Vesti state television and radio said on air from Cairo.