Donald Rumsfeld was right about everything, book by Rumsfeld claims 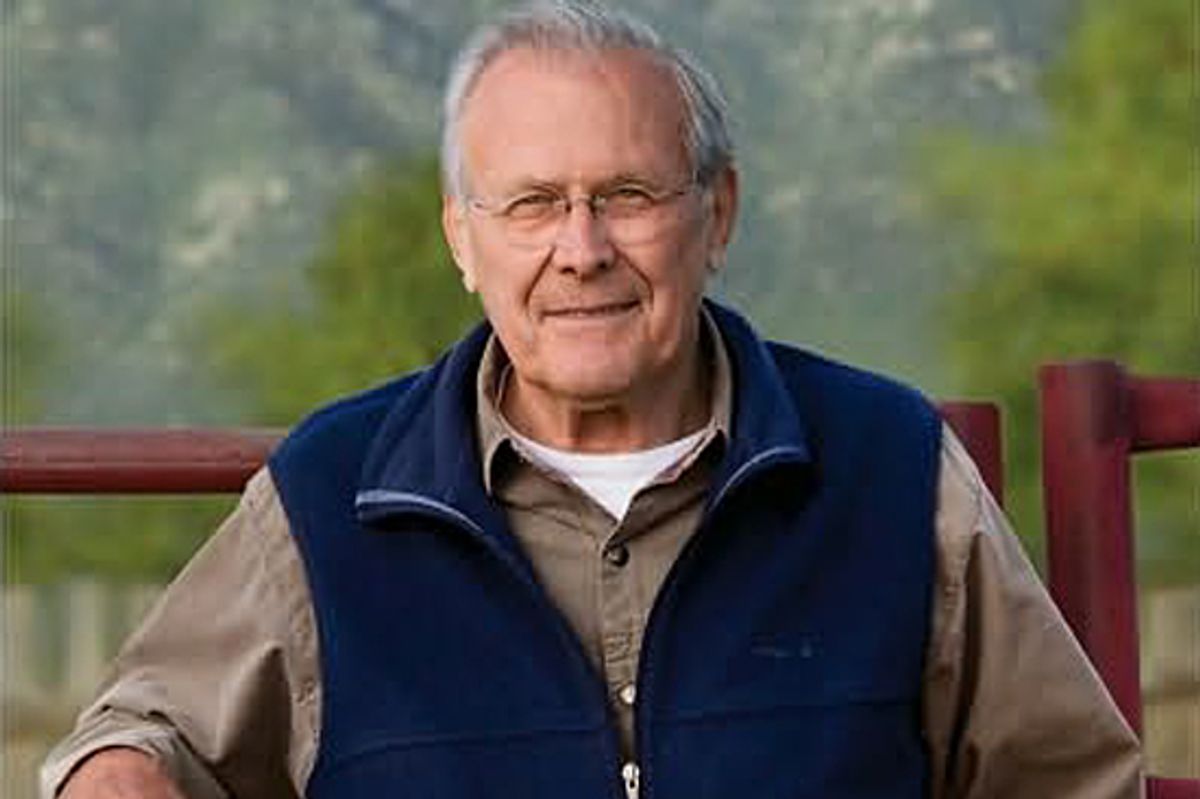 Reviled two-time Defense Secretary Donald Rumsfeld has finally written his memoir. It is titled "Known and Unknown," after a typically obtuse quote he gave to the press while mismanaging the "global war on terrorism." In his memoir, Rumsfeld is settling various old scores, and, obviously, trying to convince everyone that he is not responsible for the various awful failures and fiascoes that occurred at the Pentagon during his tenure in the Bush administration. Like, for example, the whole "Iraq invasion and occupation" thing. According to Rumsfeld, he totally intended to do it right, but stupid President Bush wouldn't let him:

Former Defense Secretary Donald Rumsfeld says in a new book that he wanted to oversee the initial reconstruction of Iraq following the United States’ invasion of the country but he was rebuffed by President George W. Bush.

"Bush didn’t cotton to the idea," Rumsfeld writes in his yet-to-be-released memoir Known and Unknown, excerpts of which were obtained by POLITICO.

"'What if we had a problem with North Korea?'" Bush asked, according to a scene that Rumsfeld said took place just before the 2003 invasion.

"'Well, Mr. President, if that happened,' I replied, 'I would come home immediately.' The President thought about that for a moment. Then he shook his head. 'No, Don, you need to be here.' I should have pressed the point harder."

Rumsfeld is also going to release a website full of "primary documents" that he thinks will prove his point. It will be like the WikiLeaks, only instead of pulling back the curtain and exposing American diplomatic and military secrets, they will probably just be a bunch of memos about how much Rumsfeld was "concerned" about the security situation in post-invasion Baghdad. Also I bet there will be a document that says "I promise Donald Rumsfeld had no idea that we were torturing and killing prisoners, signed, everyone at Abu Ghraib."

Speaking of! Rumsfeld says Bill Clinton called him once and said: "No one with an ounce of sense thinks you had any way in the world to know about the abuse taking place that night in Iraq." Yes, well, the people with ounces of sense are completely wrong.

Rumsfeld also apparently devotes a lot of space to rewaging various long-forgotten bureaucratic disputes. There is something about George H. W. Bush, whom he clearly hates. Rumsfeld also wants everyone to know that former Vice President Nelson Rockefeller was "bullying" and an "imperial vice president," which is hilarious for many reasons, including Rumsfeld's closeness to Dick Cheney and the fact that as Gerald Ford's chief of staff, Rumsfeld basically blocked Rockefeller from doing anything.

Now let's enjoy the attempted rehabilitation of Rumsfeld in the press, where his awfulness has probably been entirely forgotten.