The "Friends" actor plays a sleazy parody of himself in "Episodes," maybe the best series in Showtime's history 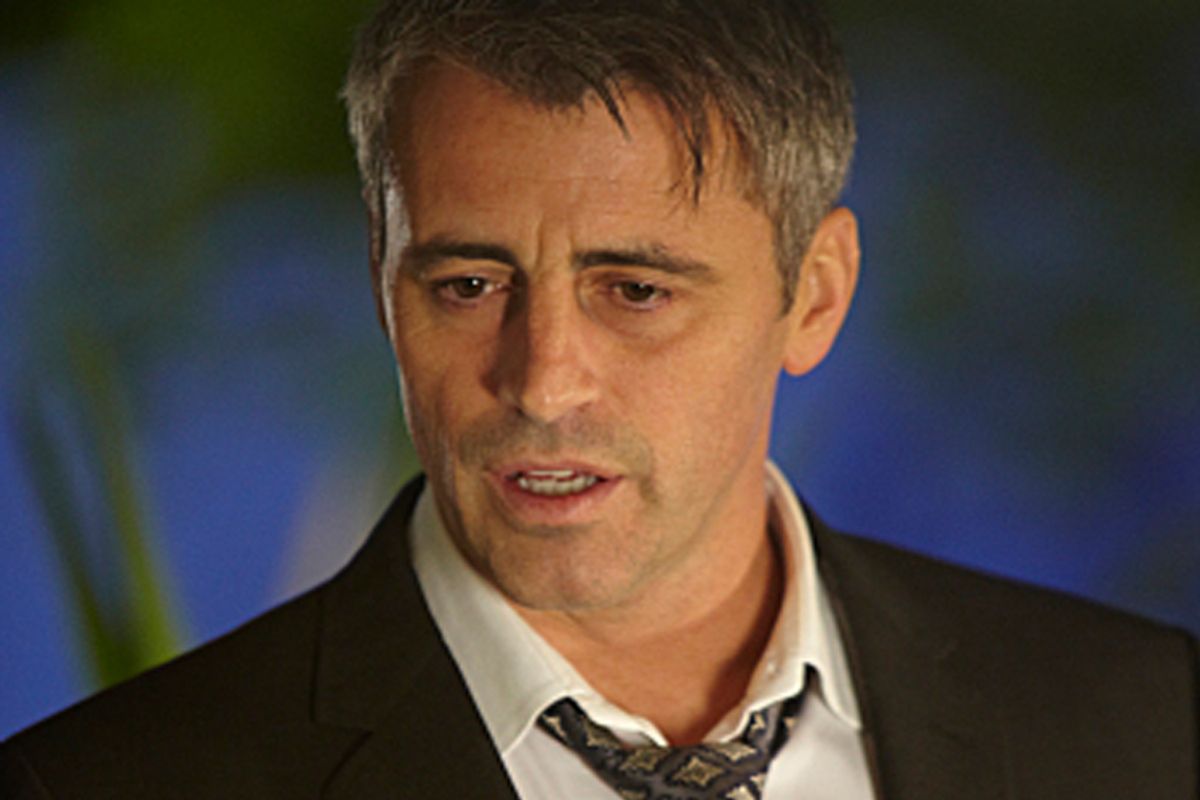 Showtime's comedy series "Episodes" (Sundays 9:30 p.m./8:30 Central), about a married team of English TV producers shooting a pilot in Hollywood, could not have premiered at a worse moment. Because the 2011 mid-season was lousy with American remakes of English series ("Shameless," "Skins," "Being Human"), "Episodes" got lumped in with actual imports and treated as supplemental material -- as a commentary on the pitfalls of adaptation rather than a worthwhile show in its own right. On top of that, it's yet another show populated by showbiz types who seem ordinary if you work in Hollywood, but whose lives are so far removed from most people's daily realities that they might as well be spies or astronauts. And while the inside-showbiz genre spawned a few notable programs (the brutal, brilliant "The Larry Sanders Show" and "The Comeback"; the uneven but fascinating "Unscripted"), most of them, even the solidly funny ones, felt as navel-gazing and self-satisfied as slide shows of somebody else's luxury vacation. Every producer who debuts this sort of series insists it's really not an inside-showbiz comedy, but a comedy about characters that just happen to work in show business -- and nine times out of 10, they're lying.

But here's the amazing thing: When "Episodes" creators David Crane ("Friends") and Jeffrey Klarik ("Mad About You") made those claims, they were telling the truth. "Episodes" might be the best series in Showtime's history -- a nearly perfect half-hour comedy that delivers all the conventional satisfactions we expect from half-hour comedies and some unconventional ones as well.

If you watched the first couple of installments and then checked out, you'd have no way of knowing any of this -- and I wouldn't blame you for bailing. "Episodes" spent much of its first episode on the machinations of getting a pilot episode up and running -- getting a greenlight from a network, casting it and so forth -- which meant that even though it had well-drawn, well-acted characters, it seemed to be foregrounding the creative process. That turned out to be, if not a ruse, then at least misleading. "Episodes" moves at a much slower (I prefer the word "relaxed") tempo than most comedies, prizing the little details of human interaction over plot, plot, plot, giving the actors room to play genuine human emotions rather than mechanical setup/punch-line dialogue.  And the show's biggest draw, Matt LeBlanc -- who plays a sleazy, manipulative, yet weirdly winning fictional version of himself -- was barely in the premiere, which ought to tell us something.

It's all of a piece -- and as my former colleague Alan Sepinwall has written, a great show teaches you how to watch it. The series title resonates on more than one level: It's "Episodes" as in "episodes of a series on Showtime," but also "individual episodes in the lives of these characters." The series immerses you in minutiae of key moments -- letting you watch, for example, the elaborate and deeply uncomfortable social rituals that surround an audition for the American network president Merc Lapidius (John Pankow), who has proclaimed himself a huge admirer of the award-winning British writer/producers Sean and Beverly Lincoln (Stephen Mangan and Tamsin Grieg) but hasn't seen a frame of the program he's hired them to adapt. Most shows would have compressed that scene into a bit. "Episodes" let it unfurl until it dominated the middle of the premiere. We saw the original series star reprise his role as the headmaster of a boys' school in an audition with Merc, his second-in-command Carol Rance (Kathleen Rose Perkins) and other key network executives, all of whom sat there wearing the default expression of TV suits:  sugary-sweet yet oddly treacherous enthusiasm. And it let you watch as the star was politely banished from the room (like just another up-and-comer -- like some kid) then invited back to read the part a second time in a generic "American" accent that he repeatedly flubbed. It's only in retrospect that you realize he was set up to fail -- that Merc likely never intended to let the Lincolns remake their show with its original cast members, or even its original concept, and this was Merc's way of putting the Lincolns where he wanted them to be.

I know -- the above description makes it sound as though "Episodes" is, in fact, mainly about show business. But what's important in the audition scene (and in almost every scene) are two subjects that happen to be intertwined: 1) social rituals and rules and 2) the dynamics of power. It takes a while for the Lincolns to figure out how little control they have over what is supposedly their project, how things really work in American TV, and how Matt LeBlanc (fictional version) is able to use his considerable charm and industry power to engineer the outcome he wants and needs.

To that end, Matt dazzles Sean by letting him drive his car, then takes him on an impromptu private plane ride to see the sushi restaurant he just opened in Las Vegas, then hilariously turns subtext into text by inviting Sean to follow him into the men's room and take a look at his legendarily enormous whanger. "It was like a science fiction creature," Sean later tells Beverly. That revelation only complicates Beverly's tangled feelings about Matt, which could be summarized as,  "Hate his guts for being a spoiled, manipulative, sexist pig/Find him strangely hot."

"Notice how he only looks at you now," Beverly tells Sean after the Las Vegas trip.

"Maybe he thinks you don't like him," Sean replies, understating the case as usual.

Before the Lincolns can say "Give the star everything," every significant aspect of the program has changed, including its title, the main character's job (from headmaster to hockey coach) and the sexual orientation of the female lead character, a librarian. (She was a lesbian in the English original, but Matt convinces Sean that she should be straight because American TV seasons are longer, and you have to leave yourself somewhere to go.)

The central triangle is extraordinarily well-developed. Sean and Beverly's marriage-of-true-minds feels utterly plausible, and the more time you spend around them, the more you realize that every problem they're encountering and every crisis they're enduring isn't really the fault of Hollywood, or Los Angeles, or the United States; it's the result of being lifted out of their familiar surroundings and placed in new terrain. In this not-so-brave new world, their personalities (as individuals and as a couple) are thrown into sharp relief. As they cling to each other and battle against the network and their own crafty colleagues, they start to realize they're more different than they ever imagined.  (This realization echoes a comment by Matt about his divorce: that when he looks back on it, he realizes he and his wife were just too different, and that their union was probably a mistake.)

The episode coming up contains some priceless bits. I love Beverly's anxious conversation with the show's seemingly ageless leading lady, Morning Randolph (Mircea Monroe), about her too-porny-for-a-school-librarian wardrobe choices. ("I'm guessing it's not within her job description to show the boys her vagina," Beverly says, regarding one of Morning's breathtakingly short skirts. "They might go to the library more," Morning says helpfully.) Even better is Matt and Sean's visit to a combination rape prevention fundraising dinner and wine tasting.  (The goodie bag includes a corkscrew, a bottle of merlot and a rape whistle.) Matt's nonchalant blathering and cork-popping during a speaker's doleful monologue about her own assault skewers a particular type of rich-guy narcissism. The concurrent bonding session between Beverly and Carol, who stay up all night smoking pot on the show's deserted soundstage, shows you there's more to these women than the psychological armor they display when they're working or dealing with the men in their lives. (Carol is sleeping with Merc, who's married to a lovely woman who recently went blind; she desperately wishes Merc's wife could regain her sight so that Merc can leave her with a clear conscience.)

What's even more remarkable than this episode's mix of sprightly and mortifying humor is the way that it segues into borderline drama without our realizing it. The hairline fractures in Sean and Beverly's relationship are widening over time, and "Episodes" itself is not as genially amusing as it was in its first couple of episodes. By the time it edges round to its season finale, the show will have become something perilously close to a comedy of misery and humilation (without losing its core of sweetness and decency, a neat trick). You don't notice the gears shifting because the scripts are so wry and exact and the performances so finely modulated.

First among equals is LeBlanc, who never lets the audience get complacent with his character. Just when you think you've got him figured out, he peels another layer off the onion and you have to reevaluate. He's smart! He's dumb! He's a bastard! He's a sweetheart! He's just sad about his divorce and missing his kids! He's using his private pain as an excuse for selfishness! LeBlanc is brilliant; the writing and direction are brilliant; the show is brilliant. And not "brilliant" in the English colloquial sense. ("I just won $5 from a scratch-off lottery ticket!" "Brilliant!") I mean brilliant brilliant.