One of the strongest reminders of Nazi evil is crumbling. Preservation efforts could cost hundreds of millions 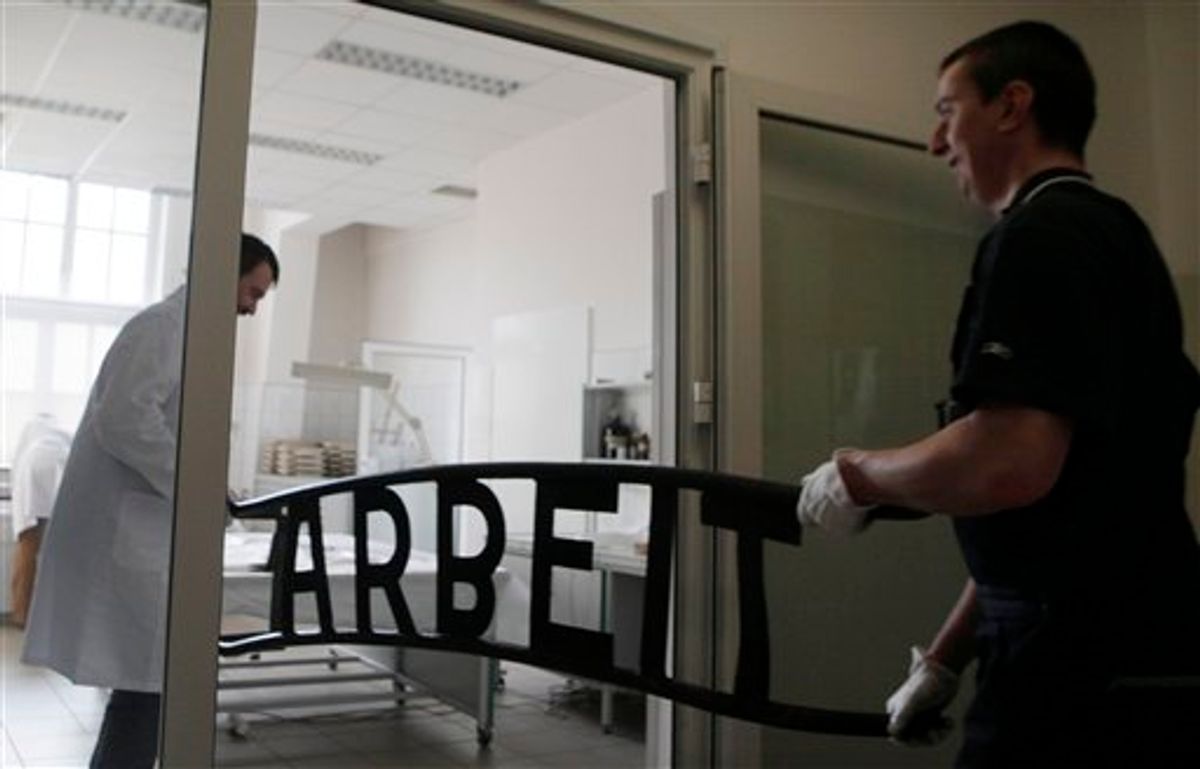 This image taken Jan. 28, 2011 shows conservation worker Andrzej Jastrzebowski, left, carrying the gate sign of the death camp in the modern laboratory of the Nazi death camp Auschwitz in Oswiecim, Poland. Officials launched a global campaign to raise euro120 million ($165 million) to create a "perpetual fund" whose interest can be drawn on indefinitely to repair barracks, watchtowers, crematoria and other structures at the Auschwitz-Birkenau state museum and memorial in southern Poland. (AP Photo/Czarek Sokolowski) (AP)
--

Auschwitz is crumbling -- the world's most powerful and important testament to Nazi Germany's crimes falling victim to age and mass tourism. Now guardians of the memorial site are waging an urgent effort to save what they can before it is too late.

Officials last week launched a global campaign to raise ?120 ($165 million) to create a "perpetual fund" whose interest can be drawn on indefinitely to repair barracks, watchtowers, crematoria and other structures at the Auschwitz-Birkenau state museum and memorial in southern Poland.

The Nazis opened Auschwitz soon after invading Poland in 1939, the act that triggered World War II, using it first as a concentration camp for Poles and political prisoners. As they implemented a plan to exterminate Europe's Jews, Gypsies and others, they built the neighboring death camp of Birkenau.

The Germans ended up transporting people in cattle cars from across the continent to the death camp in the heart of Europe, and murdered at least 1.1 million in gas chambers or through other acts of barbarity.

Museum director Piotr Cywinski made an emotional appeal for help during ceremonies last week marking the 66th anniversary of the camp's liberation by Soviet troops, as he launched the fundraising campaign. Called "Intervene Now," the campaign's message has been spread on Facebook, in newspapers and elsewhere.

"There are no more remains of Treblinka, Kulmhof, Sobibor and Belzec," Cywinski said, referring to extermination camps that the Nazis destroyed in an effort to hide their crimes. "Let us not allow the biggest of these death camps -- and the only one that is still recognizable -- to fall into decay due to the ravages of time and our indifference."

The efforts got a big boost with a donation of ?60 million ($82 million) from a still repentant Germany. Together with pledges from the United States (?12 million), Austria (?6 million) and smaller amounts from other countries, the fund has now raised ?80 million -- about two-thirds of what is needed.

The museum plans to start putting the money to use with a massive effort in 2012 to save 45 brick barracks at Birkenau where freezing, starving women once piled together onto hard wooden bunks before being worked or gassed to death.

Just a few years ago, visitors could enter all of the barracks. Today only four can be viewed in the best weather conditions, as marshy ground and tourism take their toll. Even those in the best shape have badly buckled floors strewn with loose bricks, walls that are cracked and roofs held up by damp wooden beams.

"We really can't wait any longer," Cywinski said in an interview with The Associated Press. "In 10 years, these will be ruins."

Part of the challenge comes from the fact that the barracks and other structures at Auschwitz were built in a rush during the war to serve a murderous purpose and were never made to last. Add to that the pressure of modern tourism: the site drew nearly 1.4 million visitors last year -- triple the number in 2001.

Tourism has increased as Poland, formerly a communist nation behind the Iron Curtain, has been transformed into an economically vibrant member of the European Union. Budget flights now bring in tourists to nearby Krakow from all over Europe.

But the growing interest also stems from the iconic role that Auschwitz holds in Holocaust memory -- a fact underlined by the many people visiting not just from Europe, Israel and the U.S., but also from as far away as South Korea and Japan.

"A visit to Auschwitz is more than just a visit to a memorial," said Paul Shapiro, director of the Center for Advanced Holocaust Studies at the United States Holocaust Memorial Museum in Washington, D.C.

The Germans blew up gas chambers and burnt warehouses at Auschwitz as the Red Army moved in, but their retreat was made in chaos and they did not manage to destroy everything. Today many original structures still stand, making the site a powerful visual testament to the crimes committed there.

It also helps people today understand what happened at places like Treblinka and Belzec, extermination sites that the Germans completely destroyed. Today those are marked only by memorials.

"You can actually picture the full horror of what happened there," Shapiro said. "You can picture what took place in the death camps that were built by the Third Reich."

With time against them, conservation experts in white lab coats and gloves work in modern laboratories at Auschwitz to save what they can. Recently, brown leather shoes were laid out on a table as experts worked with great care to undo some of the deformity wrought by time.

In one room, a woman used a state-of-the-art machine to scan a massive trove of SS papers. In another, a worker photographed pieces of the "Arbeit Macht Frei" sign -- the notorious and ironic slogan meaning "Work Sets You Free" which spanned the entrance gate at Auschwitz. It was stolen in December 2009 and cut into pieces before police tracked it down and arrested the thieves. So vandalism, too, is taking its toll.

The preservation department is staffed by many young, highly trained people, many of whom began their studies thinking they would one day restore art masterpieces. Instead, they find themselves grappling with questions like how to preserve toothbrushes and other everyday objects from the early 20th century that are almost never the object of meticulous preservation work.

The driving philosophy of the work is, above all, to protect authenticity and do no harm. In practice, this means preserving Auschwitz as it was at war's end, when the Germans had just bombed the crematoria and gas chambers before the Red Army moved in.

It also means accepting that not everything can be saved.

The human hair, shaved from victims' heads and recycled into cloth, will be allowed to decay completely. Today one of the most moving exhibits at Auschwitz is an enormous mound of hair shaved from the victims. Once, the hair was of various colors, but it has since turned into a mostly mangled mass of gray, with only an odd blond strand or braid standing out.

Cywinski said that to intervene and try to save the hair would amount to a "brutal and morally unjustified disturbance" of these human remains, and all that can be done is to keep them in conditions will help them last as long as possible.