Boston and other cities may shovel mountains of snow and pollutants into the water to clear up roads, sidewalks 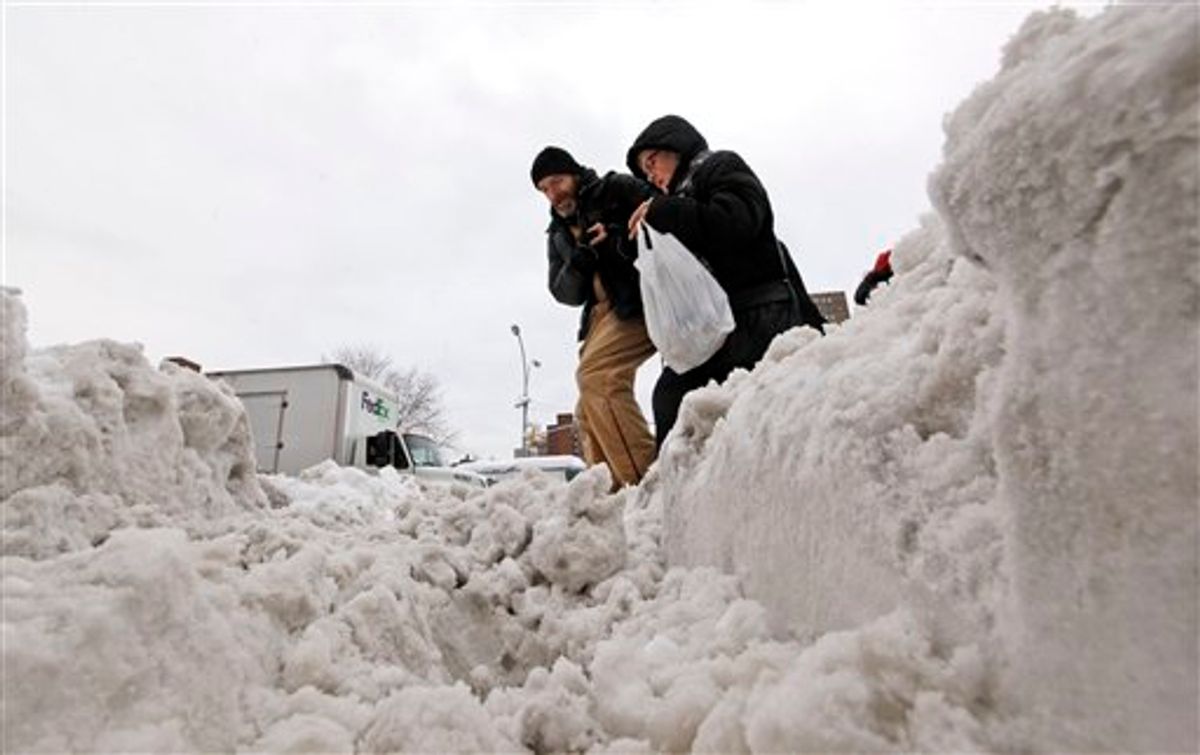 A man helps an elderly woman cross a snow-covered street on the Lower East Side of Manhattan, Thursday, Jan. 27, 2011, in New York. (AP Photo/Mary Altaffer) (AP)
--

Imagine the East Coast's largest cities mixing a brew of salt, motor oil, trash and grocery carts and dumping it into rivers and harbors.

It's allowed in emergency situations, and some officials staring at massive snow mountains in densely populated areas of the winter-walloped Northeast say that time is now, even as others warn dumping snow in water comes with big problems.

"There's a lot of stuff in this snow that if I isolated it and threw it in the river, you'd have me arrested," said John Lipscomb of the New York-based environmental group Riverkeeper.

Snow from the East Coast's insistent winter is being plowed into banks that are narrowing up roads and highway ramps like hardening arteries, blocking drivers' sight lines, and forcing schoolchildren to break paths like cattle down buried sidewalks. In a normal winter, the snow melts on a good day or is carted off to designated dumps where it eventually filters its pollutants through the earth or is treated before ending up in sewers.

This is not a normal winter. Many East Coast cities, including Boston, Hartford, Conn., and New York are on their way to setting seasonal snowfall records, and the extra snow means extra road salt and human refuse that gets swept up by plows.

The federal Environmental Protection Agency doesn't directly regulate dumping snow but recommends against dumping it in water. It also urges state and local governments to include snow disposal restrictions in storm water management plans. Some states and municipalities restrict dumping snow into waterways out of fear of harming water life and polluting drinking water. Massachusetts is one of them.

Even so, state Sen. Jack Hart has called for a "Boston snow party," with snow being poured into Boston Harbor like tea was long ago. Despite the state's long battle to clean up the once-notoriously polluted nook of Massachusetts Bay, he's getting support from unlikely allies.

Bruce Berman of the group Save the Harbor, Save the Bay said that he normally wouldn't support such dumping, but that high snow banks are making it dangerous to just move around Boston, and that the deep and active harbor can handle it.

But Boston has yet to seek to dump its snow in water. It has found room for nearly 71 inches of snow this year, about 50 inches more than it usually gets by this time of year, according to the National Weather Service. New York has seen about 58 inches; typically it has gotten 12 by now.

The hazards of too much snow mixing with a lot of humanity were well evidenced by a blizzard that paralyzed New York after Christmas. Many pedestrians simply gave up trying to use the sidewalks, instead walking down the middle of partially plowed streets. Uncollected trash piled up for days.

Ed Coletta of the Massachusetts Department of Environmental Protection cautioned that besides the junk that ends up in snow piles -- everything from common trash to grocery carts -- it can freeze in large chunks and threaten boat traffic.

Ideally, they're placed in upland areas, away from sensitive environments, so the pollutants can be filtered out through the soil before they reach the ocean or drinking water, he said.

Still, Coletta said his department has allowed snow dumping in water when it's clearly the best option.

"This is an unusual year; when there's an emergency, or an issue of public safety, the policy can be flexible," he said.

Some people don't bother to ask. In Lawrence, Mass., Mayor William Lantigua caught a private contractor dumping truckloads of snow in the Merrimack River late Sunday and early Monday. Police are still investigating the possible illegal dumping, and no charges have been filed.

According to the police report, the contractor said he "knew it was wrong, but stated, 'It's just too much snow. Where else can I put it?'"

That question hit Waterbury, Conn., public works director John P. Lawlor Jr. after the lot he uses for dumping filled up for the first time ever.

"We could not squeeze another mouthful of snow there," he said.

Lawlor figured he'd never be allowed to dump in the water, so he brought in a snow-melting machine from the Ohio company Snow Dragon, and it's clearing the downtown area over the next few days. Other cities, including Minneapolis, use the company's machines.

New York also trucks its snow to melters, which empty the water into the sewer system, then to treatment plants, where many pollutants are removed.

Snow Dragon's most popular machine costs $230,000 and measures about 27 feet long, 8 feet wide, and more than 8 feet high, said Jennifer Binney, director of sales and marketing. It melts 30 tons of snow an hour and discharges it, debris-free, into the storm drains, she said.

As well as it works, Binney noted, "It will never replace hauling."

That leaves large bodies of water as alluring dumping spots when the snow seems too high.

Expediency is no excuse to dump snow in water, said Anthony Iarrapino, an attorney with the environmental group the Conservation Law Foundation. The pollution problems are so severe that it should be considered only if there's really no other option.

Still, he conceded, "if the snow continues as it is, you may be reaching that tipping point."