A peek into the thrilling, exotic diet of a food writer

Or: Everything I ate in the past week. Which is normally a snoozefest, but hey, it's Chinese New Year! 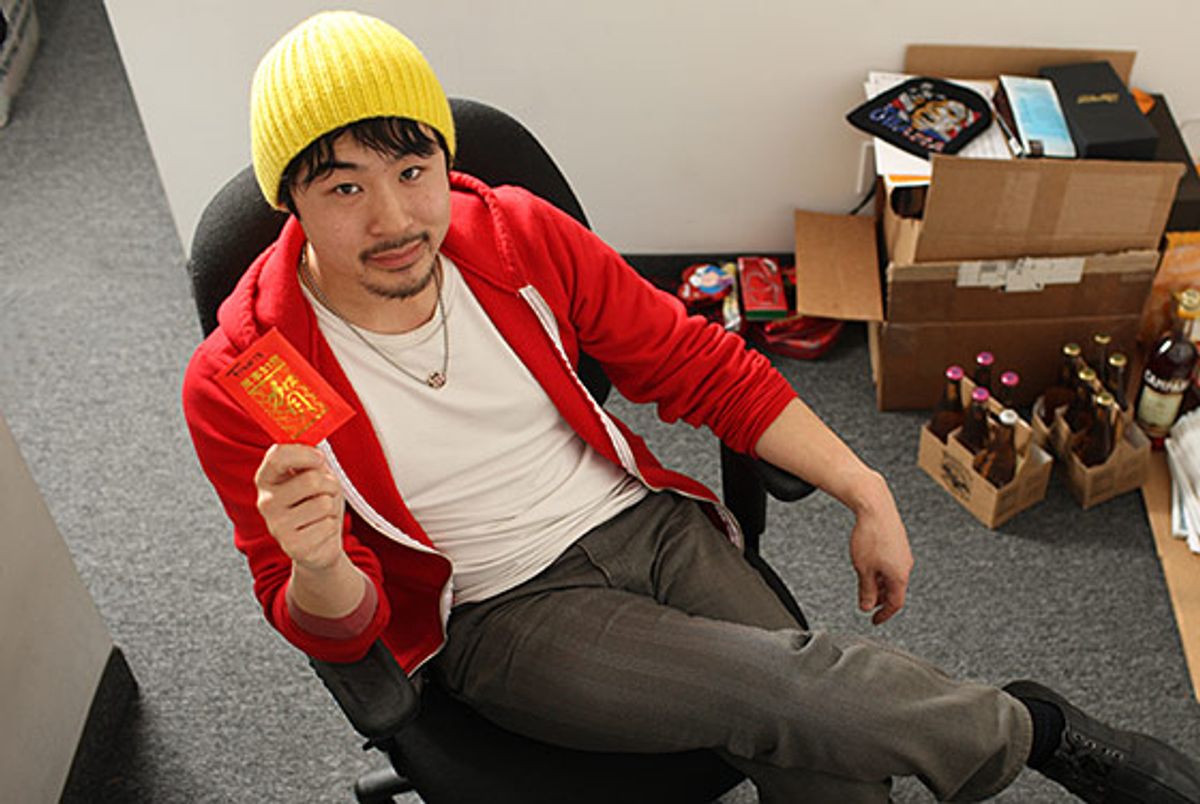 Francis Lam, all decked out for Chinese New Year
--

And today, from the Department of Narcissism, here is a recount of almost everything I've eaten in the past week -- a feature of New York magazine's Grub Street blog. I'll be honest: my diet is not nearly as interesting as you might think a food writer's should be. Many, many nights it's takeout on the couch while watching reruns of The Office at 11pm. Happily, though, they interviewed me during the much more culinarily-interesting week of Chinese New Year (or the Lunar New Year, so as not to denigrate the many other millions of people who celebrate the holiday but who aren't, you know, Chinese).

In the interview, you'll find tidbits of wisdom like this:

I went to lunch with some friends at Hotel Griffou, which is way "cooler" than anyplace I would ever normally go. But my girlfriend is Portuguese, and they started doing this Portuguese brunch. We had the rissois de camarão, which are shrimp turnovers; the pasteis bacalhau, salt-cod fritters; the kale soup; pork and clams; and the baked eggs with chorizo. There was something weirdly delicious about that dish.

Not that I'm suggesting it was frozen food, but it had this fro-mami quality about it. You know, that deliciousness you only associate with frozen food, like when you go to a [crappy] pizza place and get the eggplant parm sub and you know they're just pulling it out of the freezer, but it's delicious anyway. That's fro-mami. I think the food at Hotel Griffou was well prepared, but there was something to it. I had coffee, too. Black.

That night was the Pro Bowl. Watching the Pro Bowl is really admitting your addiction to football. So I was at home, watching the goddamn Pro Bowl. On the stove I had chickpeas stewing in a little bit of wine, soy sauce, kale stems from the other day, carrots and a bunch of other vegetables, and dried shrimp roe, which is another really awesome ingredient.

That night was supposed to be that incredible ice storm of 2011, where you're stuck inside and you find out all these awful revelations about your girlfriend and you break up. So to prepare for that, my girlfriend and I stayed near home and went to Frankie's. She had the braised octopus salad -- far and away the best thing they have. I had the pork braciola and polenta. Totally great. And they have these prunes. They're stewed in red wine and come with mascarpone. Totally delicious, with this cinnamon-y red-wine reduction.

Then we went home and waited for the ice storm and the revelations, but neither really happened.

For more of this inanity -- and what one eats for Chinese New Year -- check out the full story here.