Sarah and Bristol Palin want to trademark their names

The mother-daughter duo moves to protect their names from capitalists. What does that actually mean? 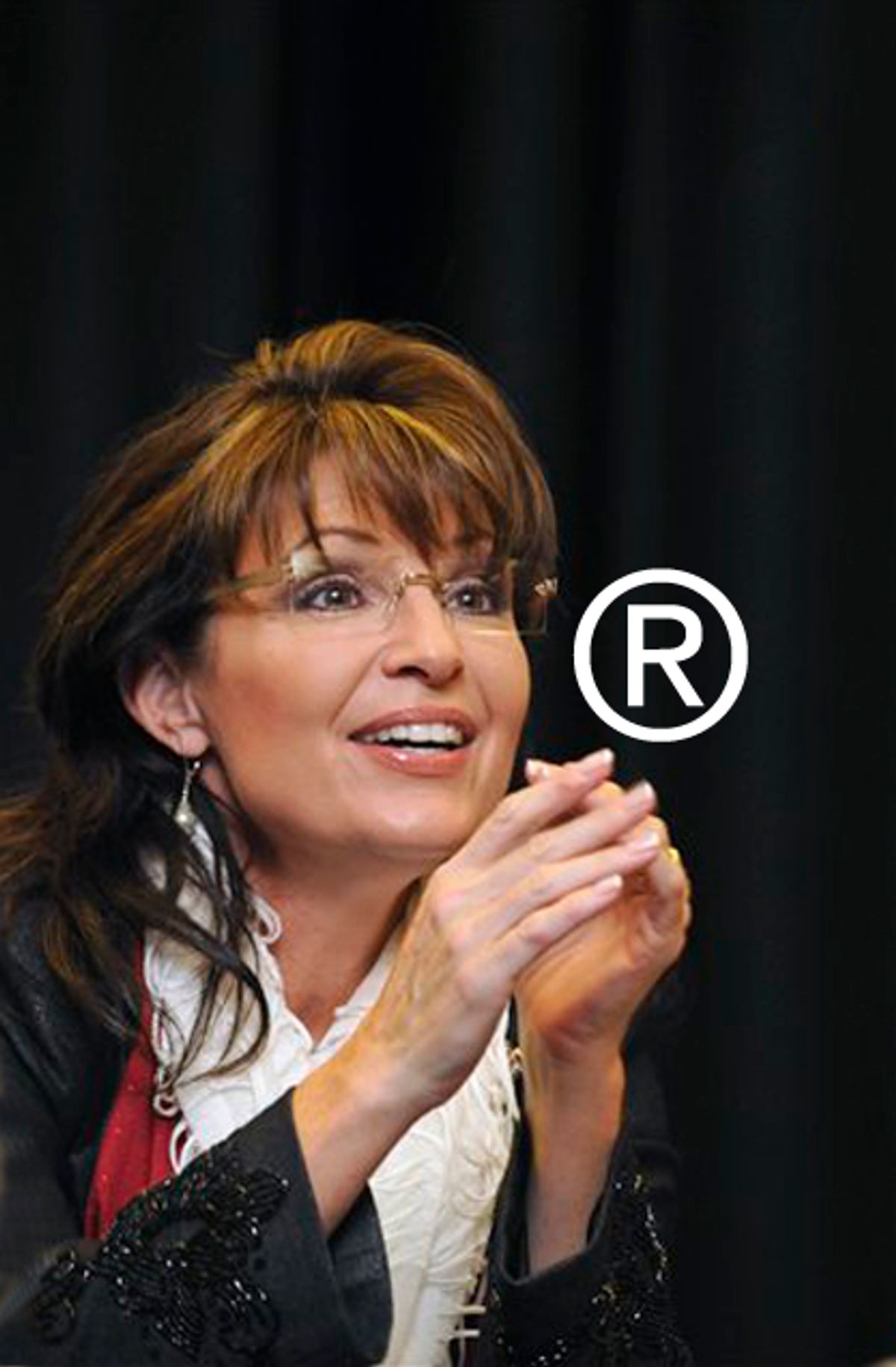 FILE - In this Dec. 3, 2010 file photo, former Alaska Gov. Sarah Palin talks during a book signing in Columbia, S.C. This month's early under-the-radar campaigning by potential Republican challengers to President Barack Obama is a reminder of something too easily forgotten: Running for president is harder than it looks, and Obama ultimately will stand against a flesh-and-blood nominee certain to make mistakes along the way. (AP Photo/Virginia Postic, File) (Virginia Postic)
--

UPDATED: Read the reply from the U.S. Patent and Trademark Office to Sarah Palin at the bottom of the page.

Sarah Palin could soon be Sarah Palin®. The former Alaska governer and influential conservative leader has filed for a trademark on her name. So has her daughter Bristol. How come? Because they're worried someone might highjack the Palin brand.

What does that actually mean?

United States intellectual property law is a funny (and some would argue outdated) thing, and a trademark is one of many ways to enjoy protection under it. Orignally proposed by Thomas Jefferson to protect the marks of sailcloth makers, trademarks can now be applied to any product or service. And those two designations -- ™ for products and ℠ for services -- can be broadly defined to include ... pretty much anything. Products, images,  slogans, designs and even names qualify for protection under the 1946 Lanham Act, and all it takes is a documented history of using that product, or "mark," uniquely for commercial purposes. There's even a designation for "non-conventional trademarks" that allow for smells, colors and sounds, like the Harley Davidson engine rumble. (Generic marks don't count unless they possess a distinctive character. Like Salon!)

Another key fact about trademark law is the difference between the ™ symbol and the ® symbol. The former requires no formal paperwork. You literally just add ™ to claim it. The latter requires an application with the United States Patent and Trademark Office that should include proof of sustained and exclusive use of the mark.

The process to register a trademark is complicated and drawn out, but one important step is to determine into which category the registered trademark should be filed.

For the Palins, that first category -- "educational and entertainment services" -- makes some sense. Sarah and Bristol both earn buckets of cash their work on the speaking and television circuit. Sarah, of course, just starred in a TLC reality series, while Bristol has been featured on "Dancing with the Stars." Sarah also has her personal appearances,  for which she reportedly requires $75,000 (at least), first class airfare, and bendy straws. Bristol's rate for speaking appearances is $14,000 per engagement. A registered trademark would prevent others from earning commercial gain by Palin-branding events or entertainment, and the two applications are apparently all but approved in this category.

The second category -- "information about political elections" --  is more complicated. This category is only mentioned in Sarah's application, and the politics bit seems like a no-brainer. Sending out mailers asking for money? Want to use Sarah Palin's name to catch someone's eye? If Sarah Palin® is approved, things like this would be illegal under trademark law.

Potential products where the Sarah Palin® name could be leveraged include "signs, photographs, brochures, website printouts or advertisements." In the registered trademark application, you must include a documented history of using this brand for commercial gains. So what did the Palin camp submit? A screenshot of her Facebook page, and also a screenshot of an article announcing her gig at Fox News. So far, this isn't cutting it with the United States Patent and Copyright Offices. According to the examining attorney, Karen K. Bush, Palin's application is insufficient for two main reasons. First, the Facebook page and Fox News article simply aren't enough evidence of sustained use of the brand. Second, Sarah Palin didn't even sign her application. Neither did Bristol.

UPDATE: The U.S. Patent and Trademark Office refused Sarah Palin's application on account of the lack of signature. But that's easy enough to fix. All Sarah has to do is sign:

Registration is refused because the applied-for mark, SARAH PALIN, consists of a name identifying a particular living individual whose consent to register the mark is not of record.

Please note this refusal will be withdrawn if applicant provides written consent from the individual identified in the applied-for mark.