With democracy or against it: There's no in between

When it comes to Egypt, America just isn't walking its talk 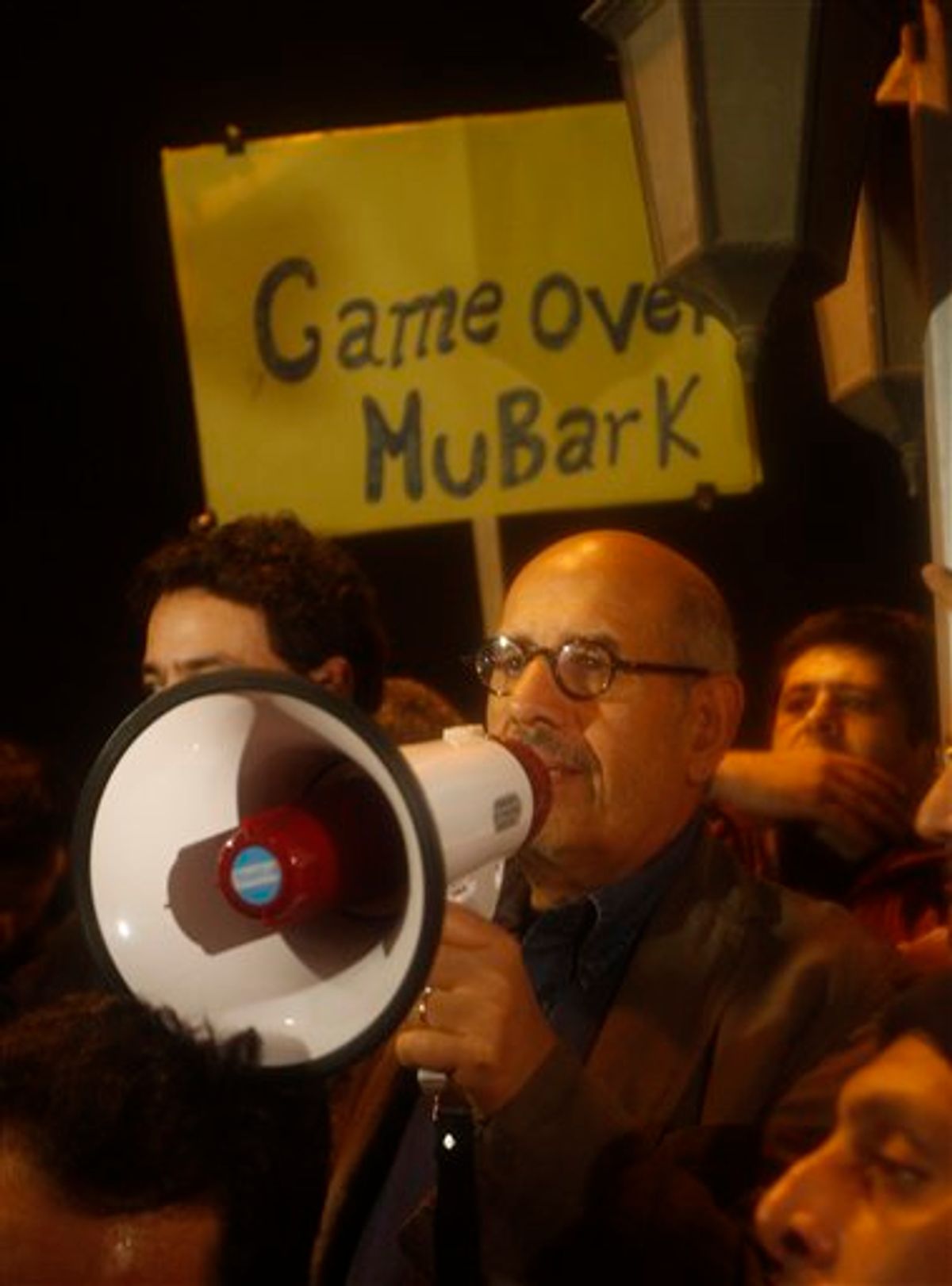 In America, politicians are rarely compelled to turn rhetoric into action. Presidents make public commitments to support legislation while quietly instructing their congressional allies to kill the corresponding bills. Congresspeople then campaign on policy proposals only to make sure their respective presidents veto the initiatives.

We all know this game -- we know its rigged rules ensure plausible deniability and prevent follow through. But as the Mideast showed this week, just because those are our rules doesn't mean everyone plays by them.

That's what the Egyptian protests against U.S.-backed dictator Hosni Mubarak really represent for us: a poignant demand that we actually embody our democratic creed -- a demand whose response shows an American government desperate to avoid walking its talk.

Remember, President Obama told a Cairo audience in 2009 that America would unequivocally back Egyptians' democratic aspirations. Citing our nation's history being "born out of revolution against an empire," he said: "We will support (democracy) everywhere."

That declaration, while admirable, was hardly courageous because it was presented as a foreign-policy version of an American campaign promise -- that is, it was issued by a politician who never really expected to be asked for attendant action. In fact, the Obama administration was so certain it wouldn't have to embody its platitudes that it was actively slashing grants for democracy-building in Egypt while maintaining military aid to the Mubarak dictatorship.

As if deliberately bragging about this disconnect between pro-democratic rhetoric and undemocratic reality, Secretary of State Hillary Clinton told Arab television: "I really consider President and Mrs. Mubarak to be friends of my family."

Those "friends," of course, fired "USA"-labeled tear gas canisters at the very democratic protesters America promised to support. As the demonstrations persisted, Obama discarded the bromides of his Cairo speech and refused to press for Mubarak's immediate resignation. He then dispatched Vice President Joe Biden to both praise the despot as an "ally" and tell reporters to "not refer to him as a dictator."

Following suit, Clinton said that despite America's stated commitment to democracy, "we're not advocating any specific outcome." When asked whether the administration was at least backing away from her BFF Mubarak, Clinton was reduced to Rumsfeldian incoherence, insisting that "we do not want to send any message about backing forward or backing back."

This left Egypt's Nobel Prize winner Mohamed ElBaradei to humiliate our equivocating leaders by stating the obvious: "The American government cannot ask the Egyptian people to believe that a dictator who has been in power for 30 years will be the one to implement democracy."

Despite the indisputable truth of ElBaradei's words, politicians and pundits have mostly defended the administration's behavior. From neoconservatives to Obama loyalists, the mediascape teems with those arguing that though we want democracy, we might have to continue propping up autocrats because democracy could elect regimes we dislike.

But that's the rub: Just as you cannot be sorta pregnant, you cannot kinda support democracy, and only when it does what you want. That's not "supporting democracy"; that's imperialism. Indeed, the ideal of self-governance is as uncompromising as America's views on terrorism: You're either with democracy, or you're against it -- and as Martin Luther King noted, we are too often against it.

Echoing President Kennedy's aphorism that "those who make peaceful revolution impossible make violent revolution inevitable," King warned in 1967 that while our country once "initiated so much of the revolutionary spirit of the modern world," we were becoming "the arch anti-revolutionaries." That reality has sowed predictable anti-Americanism among populations we've helped subjugate.

Now, though, we may see some much-needed change. With Cairo protesters so blatantly exposing our hypocrisy, we could end up shamed into finally living our democratic values -- and fulfilling Dr. King's dream.