The dog I rescued, who broke my heart

When we picked him up, he was starved, blind and bloody. We swore we wouldn't get attached -- but it was too late 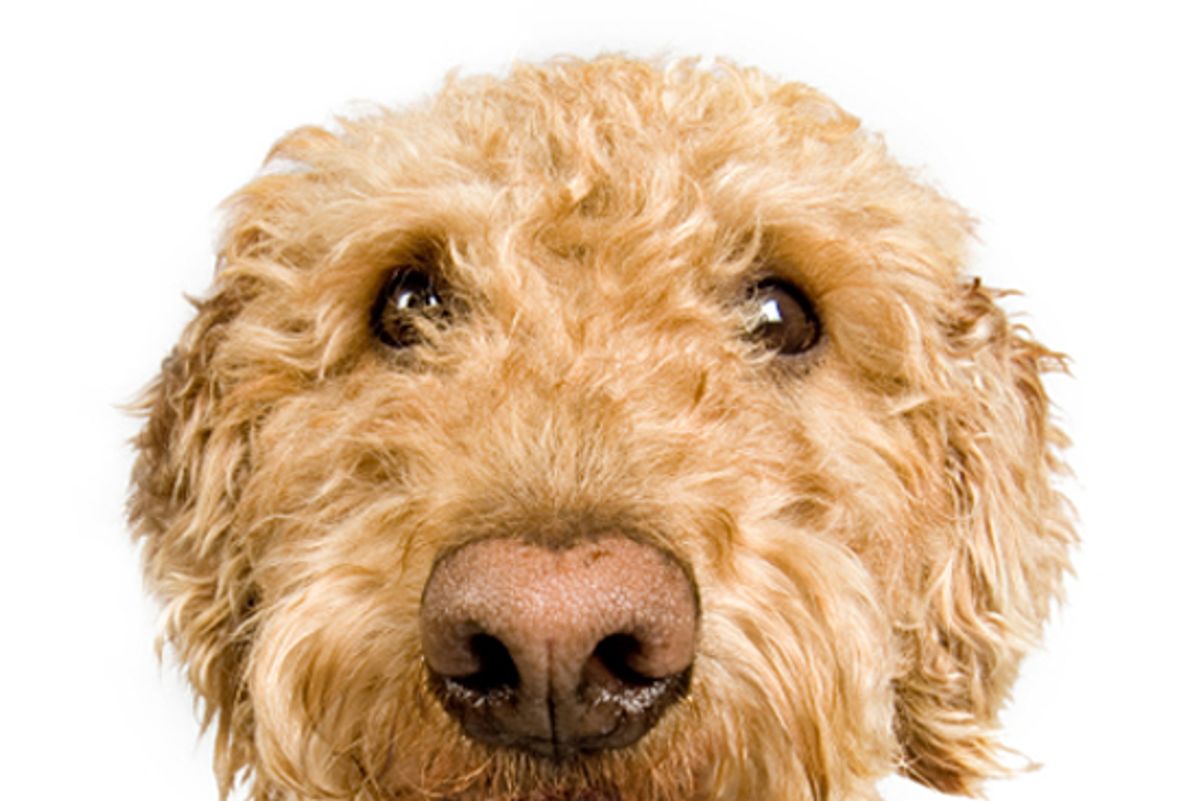 Three days into spring, just as the mounds of dirty snow had melted into tiny rivers that forked through the hollows of our Michigan woods like country interstates, we found a dog. Our neighbors, who own the blueberry farm and acreage that backs our woods, actually found it, calling us early that evening, just after daylight savings time, when the sun was still perched high in the sky. "We just found a dog lying in our compost pile. Think it's dead." Gary trudged over with a leash and a towel, green waders up to his knees, and a load of optimism. Gary is an optimist. One of those dirty, stinking, the-sun-will-come-out-tomorrow optimists. And, despite my tone, I love him for that. He is the anti-me.

Ten minutes later he was back, leading the wobbly dog, which still had part of a rotting cabbage head in its mouth. The dog was a dirty, dingy, pee yellow, and there were burrs and cuts and dried blood strewn throughout its fur. Its nails were so long, they had curled and bent and grown into his pads, which were infected and raw. His eyes were matted shut. And the dog's ribs were showing -- it was dust bunnies on bones, really -- its midsection so thin, I could nearly encircle it with both my hands.

I wanted to cry, and puke, and scream, and immediately put it out of its misery. I wanted to strangle those who had done this, who could do this. But instead I said to Gary, "You'd kill for a waistline like that," because that's what he needed to hear at that moment, especially since he looked just like a kid who, for the first time, was seeing the grim reality of the world, of the woods. Gary smiled through his tears.

Gary and I are country kids who moved to the city and then returned to our rural roots. We had grown accustomed to sprawling suburban yards and well-groomed purebreds with vanity collars who drank out of Pottery Barn ceramic dog bowls decorated with bones.

This dog was barely breathing. Gasping for air. Its teeth were chattering.

As it lay on its side we held some water to its face, and it smelled for it, its broad snout knocking the bowl from our hands. Its jaw released the cabbage head and its teeth began to chatter even more violently.

With every ounce of strength it seemed to possess, the dog willed its matted eyes open and looked up at me. He was blind.

And then the dog licked my hand, rested his head on Gary's lap, and seemed to stare directly into my eyes. He could see nothing, it seemed, but straight into my heart. I named the dog Wonder, for many reasons. Most obviously, it was a wonder he had survived, managed to make his way through the woods, in the dark, dying, for God knows how long. And he was blind, like one of our favorite singers, Stevie Wonder, whom I had, ironically, been listening to on my iPod when our neighbors called:

Those were the lyrics to "Everybody Needs Somebody" that Stevie was singing when I saw Gary trudging back through the woods with this dying dog.

Never name a pet you don't intend to keep. That's the first mistake. It bonds you to it emotionally, in a way that seems forever. But I couldn't help it.

This wasn't the dog I wanted. In fact, I didn't even want a second dog, much less one that was malnourished, mangy, and blind. There were too many cute puppies out there. And we already had a very high-maintenance mutt, Marge, who was the love of my life. Gary had wanted a second dog for a long time but I had nixed it, saying the timing wasn't right, or Marge wouldn't do well with another dog in the house, or it was too expensive, or this or that. I am good with excuses. I am good at planning. I am good with spin.

In my former life I was a PR person. I can change the outlook on anything, make something awful sound good, make something good sound awful. What I've never been good at, however, is facing my own truth, dealing with my own emotions. I am a good burier, like -- to pardon the obvious analogy -- a dog with a bone.

Gary rushed Wonder to the vet after we found him, and when he returned he was crestfallen but hopeful. The dog was 40 percent underweight and had fleas, an infected paw, and, worst, the early stages of heartworm. Everything, he was told, however, might be curable. The vet wanted to see Wonder for a complete physical Monday: blood work, X-rays, a battery of tests to see just how deep his health issues were.

Always the optimist. I told Gary all the reasons why we shouldn't keep the dog. They were obvious. Too obvious. It just wasn't logical. I told Gary the dog might not live through the weekend. And then Gary spent the weekend ignoring those reasons. He took the dog to a groomer and had him washed and blown dry, Wonder standing under the dryer, his eyes shut, sighing as his matted yellow fur turned to fluffy gold.

By Saturday the dog was eating well, drinking water (too much, actually), and wagging his tail when he heard Gary's voice. By Sunday, Gary had taught Wonder to navigate our stairs, to make his way around the house, to come to the sound of his voice.

Wonder could find Gary, walking directly to him -- into his knees, actually -- leaning his body into Gary's and sighing and wagging and smiling. He would live.

When I woke Monday morning, I had made up my mind. We would keep Wonder. That's the thing about living with an optimist: You realize you are one, too, somewhere deep down. You realize life and love is all about risk and doing the illogical sometimes. Why must I always be the rational one, I thought all night. The sane one. Why do I always fight everything? I too often see the impossibility rather than the possibility. Why do we too often have to be adults, and see not the path but the obstacles? Our childhood wonder is knocked from us at too early an age. Act like a grown-up, do the logical thing. Even when your heart is telling you otherwise.

This was a dog that had lived a nightmare of a life and still never whined or howled or cried out of pain or discomfort. You don't make a sound, I learned from Wonder, when no one ever comes to see how you're doing. So I decided: Gary and I would do everything in our power to give Wonder a few wonderful years. We would install a tether line so he could go to the bathroom and install gates by the stairs so he would be safe, and we would clear paths in the house so he could navigate. He would become part of our family, just like Marge.

On Monday we dropped Wonder off at the vet, me, for once, the optimist, thinking about what might be: Wonder by my feet, lying in front of the fireplace on cold winter nights; Wonder snuggling against me on the screen porch; Wonder feeling the sand in his paws when we walked him on the beach.

And then the vet called Gary a few hours later and gave us his report after viewing the dog's lab work: Wonder’s kidneys were failing, his organs collapsing, his prognosis beyond bleak. He had a few weeks, a couple of months, tops.

We still considered taking him home for those final weeks, until we were told he was in pain. He may have been silent, but he was screaming inside. So we did something we never thought we would: We put an animal to sleep. We took responsibility for someone else's irresponsibility. But we also gave Wonder a few days of peace, of home, of love. He did not die alone, abandoned.

When we arrived at the vet's office, we walked Wonder around outside for a final few minutes of talking, comforting, hugging, kissing, petting, and crying. He smelled the grass that was just coming to life, a few crocuses that signaled spring. We reluctantly went back in, still crying, and into a private room with a nurse who asked if we were ready. We said no.

"Do you know this is Prevention to Cruelty of Animals Month?" the nurse asked.

"No, no, it's just so sad that it comes to this. Over one hundred thousand dogs are abused every year in the United States. You didn't make Wonder this way."

Staring at this dying dog, it certainly felt that way, however. And then the nurse brought out the needle and eased it into Wonder's fluffy arm.

At first Wonder fought the anesthesia, bobbing his head back and forth, "chasing the tennis balls," the nurse said. And then he closed his eyes. He fell asleep. He stopped breathing. It was so quick.

But much too slow.

Gary and I kissed Wonder on the snout, crying, convulsing really, and I told him to go find my late brother, and that he would take him fishing, run with him through heaven.

Before we left Wonder, Gary leaned down and whispered into his ear, "It's spring, buddy. You've been reborn now. You're finally free. You can finally see again."

But really it was me who could.

Wade Rouse is a writer living outside Saugatuck, Mich. This article excerpted from his new memoir, "It's All Relative: Two Families, Three Dogs, 34 Holidays, and 50 Boxes of Wine."