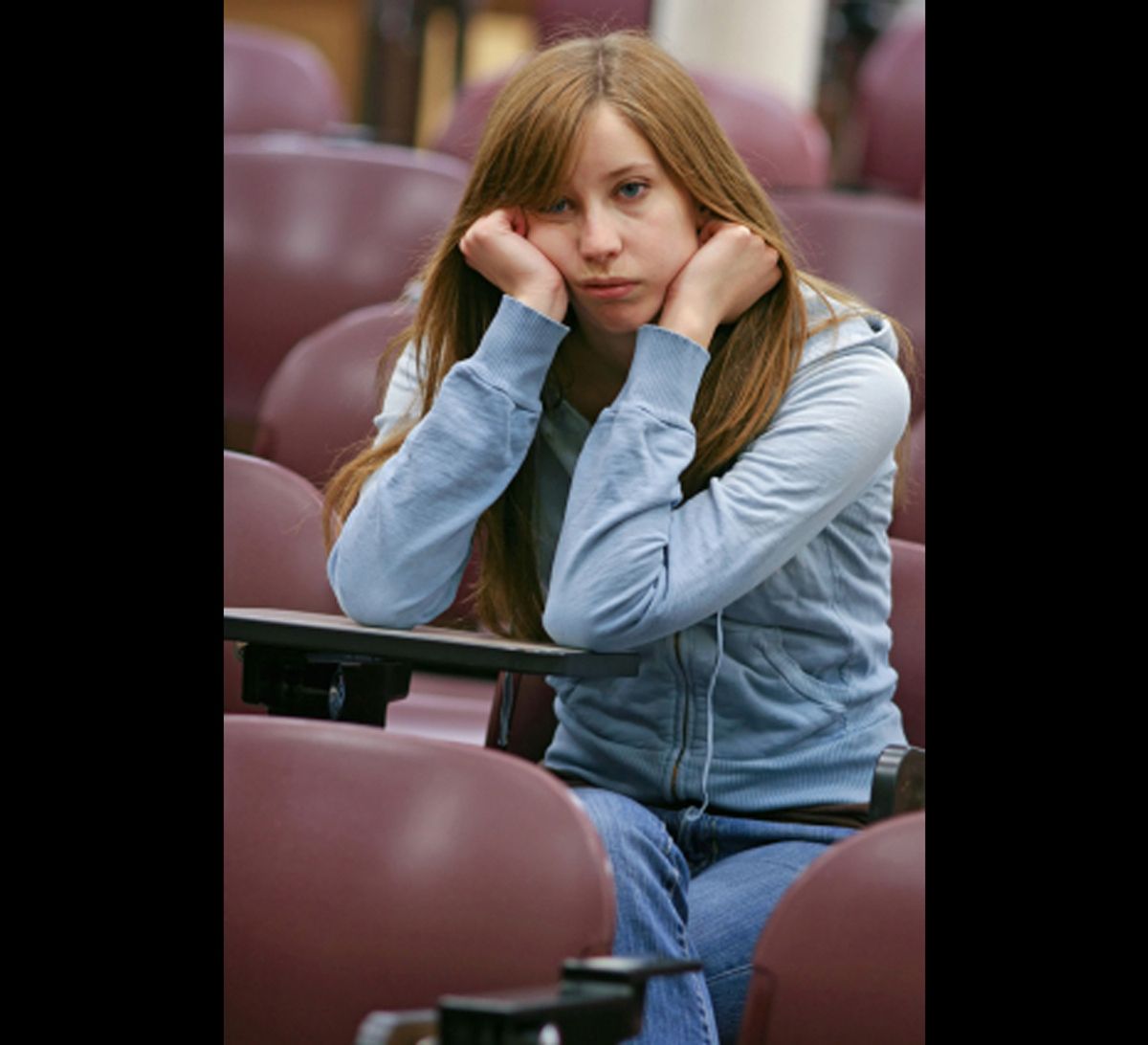 Americans are more anxious about education than we have been in decades. Documentaries like 2010's "Waiting For Superman" grapple with a public education system in crisis: overcrowding in classrooms, unmotivated students and the rising cost of a college education. Studies like the PISA (Program for International Student Assessment) rank American students much lower academically than their Korean or Finnish peers, so much so that Secretary of Education Arne Duncan felt compelled to tell the New York Times: "We have to see this as a wake-up call -- The United States came in 23rd or 24th in most subjects. We can quibble, or we can face the brutal truth that we're being out-educated."

So far, the debate about U.S. education has focused on primary and secondary schools. But what if the downward trend in learning extends into the echelons of higher education? That's what Richard Arum argues in "Academically Adrift: Limited Learning on College Campuses." Arum, a sociology and education professor at New York University, wrote the book with University of Virginia sociology professor Josipa Roksa, and they say an increasing number of undergraduates are moving through college without working particularly hard, and without learning key skills like complex reasoning and critical thinking. Using the Collegiate Learning Assessment, a standardized test, as well as transcripts and self-reports from students, Arum and Roksa assembled disturbing data that reflects declining academic rigor across the board: at state universities, research institutions, liberal arts colleges, even highly selective schools.

Salon sat down with Richard Arum at his NYU office to find out if higher education is really in trouble.

The book is called "Academically Adrift." What do you mean by that?

We use that term in two different ways: The schools themselves are academically adrift -- they've lost their focus on their core mission of undergraduate education. Colleges and universities are doing lots of great things today -- advancing knowledge, helping the economy, producing pharmacological patents and prime-time athletics. They're not focused on educating students. We also argue that large numbers of students today are moving through college and university academically adrift. They end up with college degrees that have too little substance to them, because they've been able to identify pathways through college that have asked very little of them academically.

College is a prerequisite now in all sorts of fields. There's less emphasis on trade schools and junior colleges, and it's increasingly expected that if you finish high school you'll go to a four-year college. Do you think that's part of the trend of learning declining in college?

I think it's a mistake to attribute the patterns we identify in the book to increased access. It's absolutely true that today's high school students overwhelmingly report that they plan to go to college. What hasn't expanded dramatically is the actual number of students attending four-year colleges. In the '60s and '70s there was a great expansion in the number of kids going to four-year colleges. From 1980 on, it's been relatively flat, or on a slight increase in college access. Today there's a lot of rhetoric about "college for all," and there has been an increase in students going to two-year colleges in particular. But the increase in four-year colleges is much less than people imagine. The total percentage of students that end up with four-year degrees is still hovering around 30 percent.

What made you want to write a book about declining learning standards in the first place? Is this something you've noticed first-hand?

I did not go into this study wanting to write a book about declining learning standards, or even have it as a working hypothesis. I'm a lifelong educator and today also a social scientist. My prior work is in K-12 education. We know a lot about how K-12 education works and what factors and characteristics are associated with learning. We have not had similar studies in higher education. The opportunity arose to follow college kids longitudinally with a similar research design, where you measure them repeatedly on test score performance, and also survey them and collect their transcripts to create a data set like the ones existing in K-12 education. That was our interest.

So you didn't expect to find what you did?

No. Absolutely not. It took a while for us to see these patterns in the data and understand the meaning of the results and the student reports.

What were some of your findings?

Fifty percent of the kids in a typical semester say they haven't taken a single course where they've been asked to write 20 pages over the course of the semester. And 32 percent have not taken a single class the prior semester for which they've been asked to read more than 40 pages per week on average, and in terms of homework, 35 percent of them say they do five or fewer hours per week studying alone.

After the New York Times wrote about your book, many online commenters took exception to those findings, though. They said, "I'm a math major, or I'm a physics major, of course I don't read 40 pages per week. I do problem sets." Do you think the study is biased towards liberal arts majors?

Most people expect college students regardless of major to develop these higher-order skills through reading and writing. That's why colleges and universities have core requirements that every student must take no matter what their major is. It's absolutely the case that different majors have different reading and writing requirements, but they should be experiencing these sorts of academics in some place in their course schedule. Interestingly, that critique also doesn't hold because math and science majors are doing quite well. They're studying a lot of hours and they demonstrate higher rates of learning

There's also been some criticism of the College Learning Assessment (CLA), the standardized test used to evaluate the students. Some in the blogosphere have argued that it favors liberal arts students. Can you explain how the CLA works?

The CLA gives the kids a performance task -- a set of six or seven documents where they're asked to think critically about what's in the documents, synthesize the information, and write a task based on this information. The specific tasks that they're asked to do are ones that a college graduate might experience in the labor market. It's not a reductionist multiple-choice test but an authentic measure of kids' ability to think and communicate. Let me say though, all standardized measurements are by definition imperfect and limited. The CLA also doesn't attempt to measure subject-specific skills. However, the power of our work is that we're not simply looking at the CLA measure and inferring the state of undergraduate education from that. We also looked at their transcripts and their self-reports of what they're experiencing in their classes. Some of the reception has attempted to just look at the CLA and find faults with that, but every test score is imperfect. Coupled with student's self-reports of their limited academic demands, they tell a very powerful story.

I graduated from a highly selective liberal arts college in 2007. As I read the book, I thought, "Wow, this really wasn't my experience. If I didn't do my reading in college, and if I didn't study a certain amount, it definitely showed in my grades and class discussion." I found this to be true of most students at my school.

We argue in the book that findings do vary across the board. Some colleges and universities do a better job at requiring academic rigor and have demonstrated learning on this measure. As sociologists, we're very interested in peer effects. We found the more selective the college is in terms of the entering test scores, those academic environments tend to be more rigorous. Kids take courses where they're asked to do a bit more in terms of reading and writing, they study more hours, and they demonstrate greater gains. However, in all the colleges and universities we looked at, we found some kids applying themselves and learning, and we still found large pockets at even the most selective colleges where that wasn't occurring.

What's the reason you don't identify the schools in the study?

It is standard social science practice to maintain the confidentiality of your research sites and of the participants.

Are low levels of learning in college really a new phenomenon? "Animal House" came out in 1978. The academically challenged George W. Bush graduated from Yale in 1968, and even JFK's application to Harvard, which was recently released online, is kind of appalling.

There's a longstanding tradition of some students going through college with little asked of them and little learned. Nothing is new about that. However, there is significant evidence out there that something has changed in terms of the academic rigor and student workload. Two labor economists, Philip Babcock and Mindy Marks, went back and looked at all the survey data all the way back to the 1920s. Full-time college students were asked, "How much are you studying and preparing for class?" From 1920 to 1960 it's relatively flat. And then something happens in the '60s going forward where it drops in half. Full-time college students spend 50 percent less time studying than they did several decades ago. We also know that in terms of grades, students expect to receive higher grades and do receive higher grades in spite of less effort.

What are the consequences, then, of a generation of college graduates who aren't as well-educated as their predecessors, or their peers abroad?

The environment that kids face has changed. They're going into an increasingly globalized economic system. Even if you have subject-specific skills, the labor market is so uncertain that people are increasingly moving from job to job as adults. You need to have developed these higher order skills: critical thinking, complex reasoning and the ability to communicate in writing. If you haven't, you're going to be at a lifelong disadvantage in the economy. Equally or more troubling, if you're graduating large numbers of kids that have not developed critical thinking and complex reasoning, how are they going to function as democratic citizens?

The last chapter of the book is called "Mandate for Reform." What are your suggestions to fix these problems?

A one-size-fits-all federally imposed accountability system like exists in K-12 education would be a huge mistake. It would be counterproductive. It would have unintended negative consequences. Rather, we call for greater institutional and individual responsibility at lower levels in the system. These problems are solvable. Greater academic rigor, faculty coming together and deciding that courses should have greater rigor in terms of reading and writing and hours spent studying. It's not clear to me that the stakeholders in the system today -- administrators, faculty and students -- have prioritized undergraduate learning. I don't think it's going to happen automatically. We're very skeptical that anything is going to change without some exogenous shock to the system.

What do you think that shock to the system would have to be?

In the conclusion of the book, we give the Sputnik example, which President Obama also used recently. The Sputnik launch shocked the system to focus more on math and science instruction in particular, and improved those areas. I think it's going to require something similar to that kind of awakening for American society to pay attention to this.