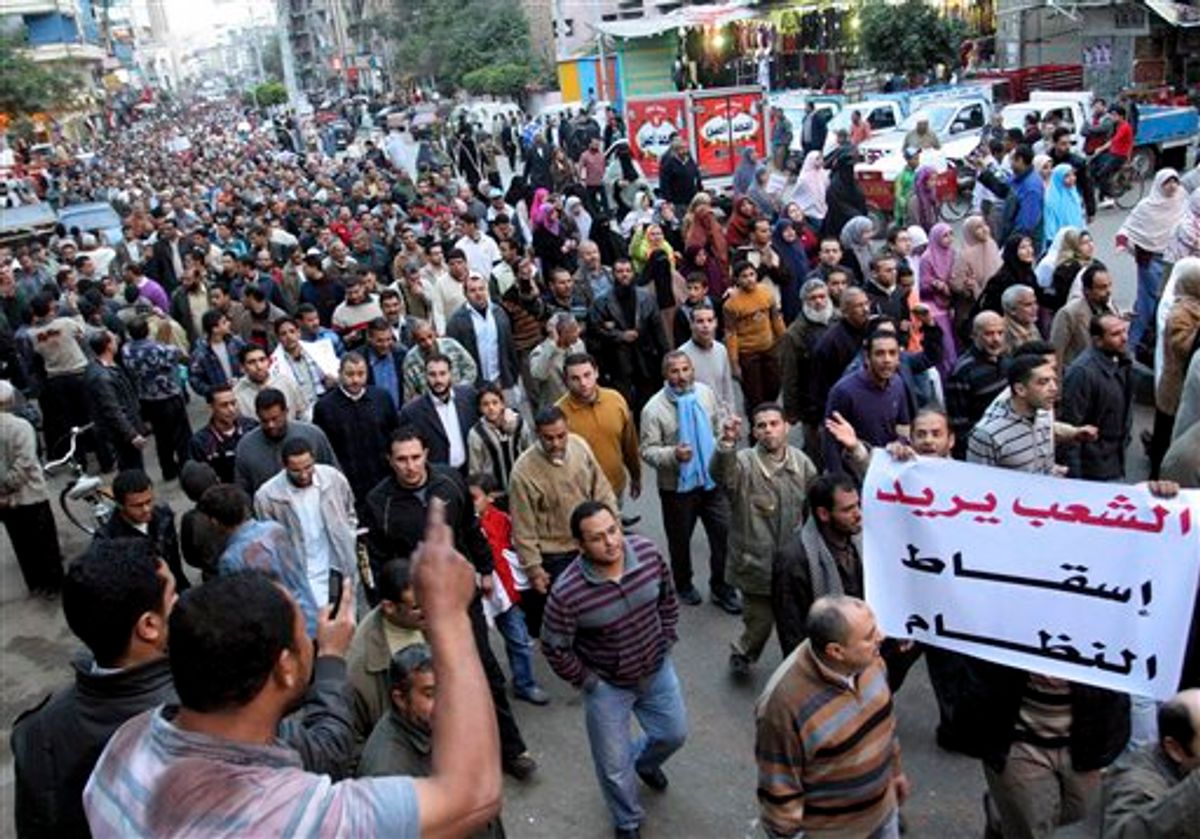 Egyptian anti-Mubarak protesters march in al Mansoura city, Egypt, Sunday, Feb. 6, 2011. Egypt's largest opposition group, the Muslim Brotherhood, said it would begin talks Sunday with the government to try to end the country's political crisis but made clear it would insist on the immediate ouster of longtime authoritarian President Hosni Mubarak. Arabic read " People Need the Removal of the Regime". (AP Photo) (AP)
--

Two rows of men greet demonstrators at the main entrance to Tahrir Square, clapping as people enter, and chanting in the rhythms of a traditional Egyptian wedding procession.

"We are becoming bigger!" they shout. "God is Great!"

Tahrir Square, the scene of deadly battles with firebombs, rocks, horses and camels just last week, has taken on a carnival mood in the past few days as demonstrators try to establish an enduring presence, complete with food and entertainment, in their campaign to demand Egyptian President Hosni Mubarak's ouster.

Fruit vendor Ashraf Gaber, 30, asked people to express themselves in a few words, then wrote their thoughts on pieces of A4 paper he placed on a stack besides him.

Volunteers added it to a collage that spread out before Gaber in a a series of rows held down by rocks.

"We have to make the people happy!" Gaber shouted. "Express what is in your hearts!" he told the crowd.

"Oh Mubarak, you are a shoe!" read one -- a particularly stinging insult in Arab culture.

"An Interior Ministry of Thugs!" read another.

Nearby, crowds of young men and women cheered and sung as Fadi Mikhael, 29, strummed an oud -- or Arabic lute -- to a Western beat.

"We won't be quiet! Raise your voice!" he sang on a stage, his voice amplified by four powerful speakers. The crowd clapped and repeated the chorus.

Poetry writing and recitation is a popular Arab pastime, a manifestation of pride in a language that's rich with subtle shades of meaning and unifies a people of different ethnic backgrounds and two major faiths.

There is a regional satellite television talent show just for poets -- with viewers in the millions -- and others dedicated to poets mocking each other in verse.

On another impromptu stage, a middle-aged man read poetry into a microphone as another crowd clapped at his ability to cleverly rhyme the stanzas.

"I am a peasant with a sheaf of wheat/I give it to the people generously," he read.

Nearby, demonstrators used stones, once used to repel pro-Mubarak supporters, to spell out slogans on the ground.

"We are learning a culture of respectful disagreement here," said Nashat Cross, 28, a Christian who works as a translator. "The level of cultured discussion is something I really admire."

From time to time, somebody in the crowd would begin chanting anti-Mubarak slogans, and hundreds of others joined in, clapping.

Men sometimes bellydanced on the side to the rhythm of the chants.

Another procession of men stood at the exit, waving the red-white-and-black Egyptian flag, banging drums, blowing on harmonicas and singing, again, like an Egyptian wedding procession.