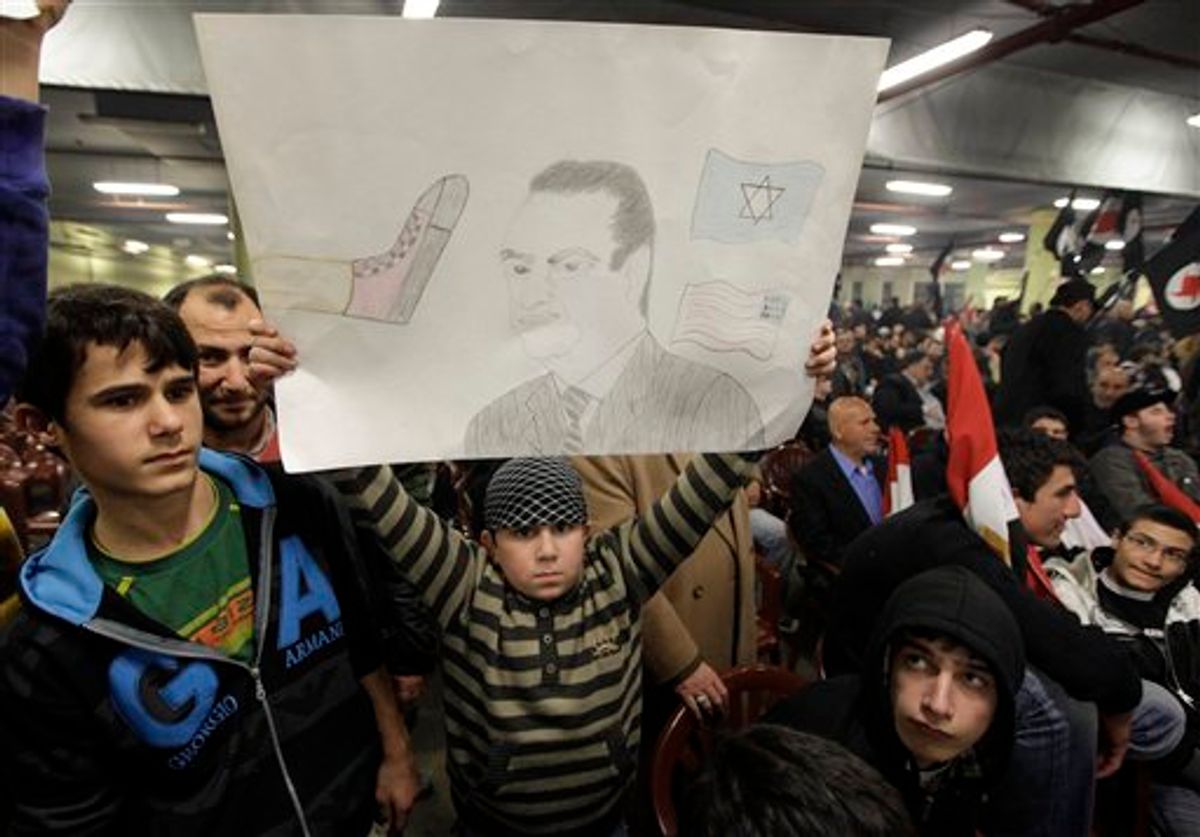 A youth holds a drawing depicting Egyptian President Hosni Mubarak during a speech by Hezbollah leader Hassan Nasrallah at a ceremony called for by Lebanese anti-American groups to support anti-government protesters in Egypt, in Beirut, Lebanon, Monday, Feb. 7, 2011. Speaking on a screen Nasrallah said the Egyptian uprising will change the Mideast for generations to come. (AP Photo/Bilal Hussein) (AP)
--

The leader of Lebanon's Hezbollah militant group said Monday the unrest in Egypt will transform the Middle East by pushing out a regime that has maintained peace with Israel.

Sheik Hassan Nasrallah predicted that whatever leadership emerges in Egypt after President Hosni Mubarak will move away from Israel, leaving the Jewish state more isolated. The only other Arab nation to have made peace with Israel is Jordan.

"You are fighting the battle of Arab dignity, the dignity of the Arab human being that was humiliated by some of its leaders in the past decades," Nasrallah said during a ceremony to support the Egyptian demonstrators and to protest the 1979 peace treaty between Cairo and Israel.

"We look forward to the day that you bring back to Egypt its leading and historic position in the life of our nation and the region," Nasrallah said referring to the days when Egypt was leading anti-Israeli policies in the 1950s and 1960s.

Egypt became the first Arab nation to sign a peace accord with Israel in 1979 and has strictly honored it. Mubarak has close ties to Israeli leaders and has acted as a bridge between Israel and the Palestinians to the broader Arab world.

Mubarak has refused protesters' demands to step down immediately, but says he will not run in September's presidential election. Israel's leaders have expressed fears that if the Muslim Brotherhood, Egypt's main opposition movement, has a major role in a future Egyptian government, the peace treaty between the countries could be in jeopardy.

In his speech, Nasrallah asked where Arabs want to stand -- "on Israel's side, which wants to protect this regime, or with the revolution that wants to bring it (regime) down."

Hezbollah, which has fought Israel since 1982, has had poor relations with Mubarak's government mainly since 2009, when Egyptian security officials said they had uncovered a Hezbollah cell plotting to destabilize Egypt.

A year later, an Egyptian court convicted 26 men of spying for Hezbollah and plotting attacks in Egypt and gave them prison sentences ranging from six months to life. They included a Lebanese, Sudanese and Egyptians.

Nasrallah then acknowledged sending an agent to supervise weapons shipments to the militant Palestinian group Hamas in Gaza, but he has denied seeking to undermine Egypt's security.

Last week, senior Hezbollah official Mahmoud Komati said one of the defendants, Lebanese citizen Mohammed Youssef Mansour, better known as Sami Chehab, escaped from his Egyptian jail during the unrest and is in a safe place.

Komati refused to say whether Mansour is in Lebanon.