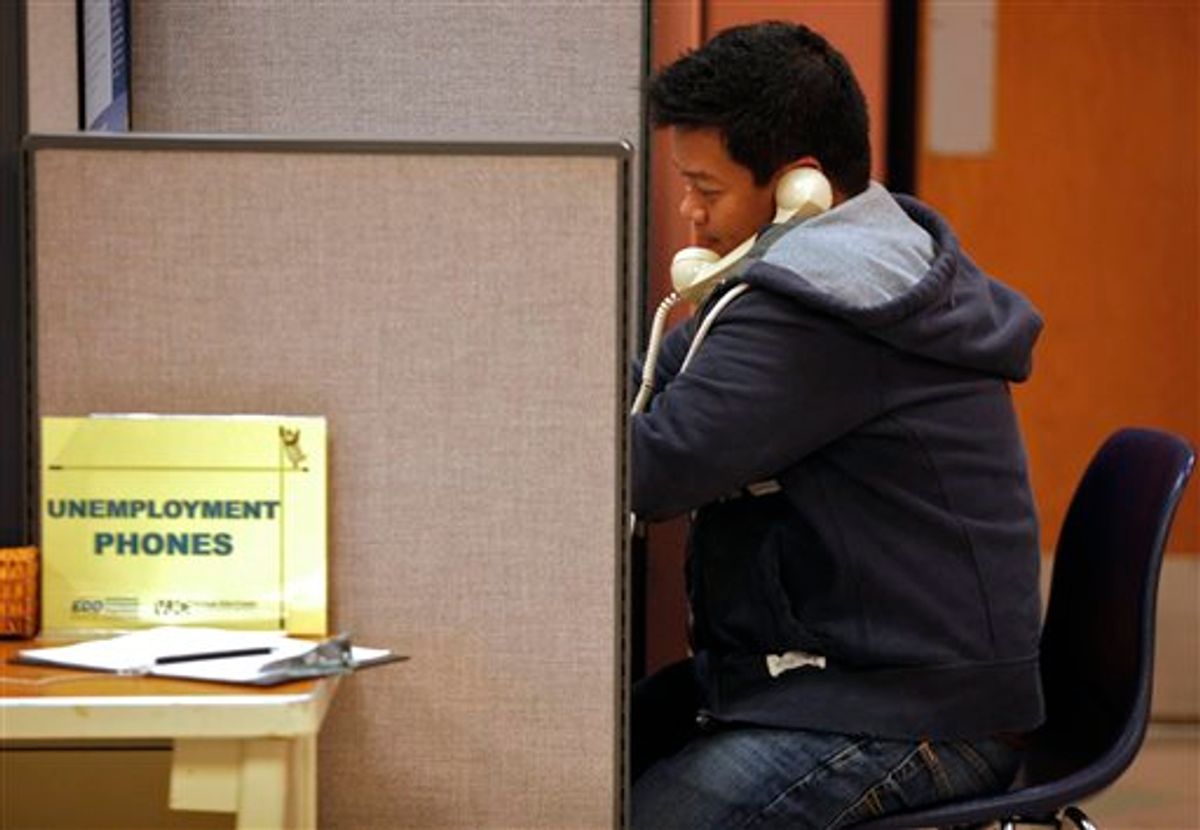 The U.S. labor force has been split into two groups: the relieved and the desperate.

If you have a job, you can exhale; you're less likely to lose it than at any point in at least 14 years.

If you're unemployed? Good luck. Finding a job remains a struggle 20 months after the recession technically ended. Employers won't likely step up hiring until they feel more confident about the economy.

A result is that people who are unemployed are staying so for longer periods. Of the 13.9 million Americans the government says were unemployed last month, about 1.8 million had been without work for at least 99 weeks -- essentially two years. That's nearly double the number in January 2010.

Yet the deep job cuts of the recession have long since ended. In January, companies announced plans to trim fewer than 39,000 jobs, according to outplacement firm Challenger, Gray & Christmas. That was 46 percent fewer than a year earlier. More strikingly, it was the fewest number of planned layoffs in January since Challenger began keeping track in 1993. For all of 2010, planned layoffs hit a 13-year low.

Eventually, consumer spending will rise high enough that companies will need to accelerate hiring to keep up with demand. In the meantime, a fading fear of layoffs is likely helping the economy: It's encouraging consumers who have jobs to spend more.

"The fact you know that the paycheck is going to be coming in now and for the foreseeable future gives you permission to do some extra spending," says John Challenger, CEO of Challenger.

Retailers, in particular, have stopped shedding workers. After the best holiday shopping season in four years, stores cut fewer than 5,800 jobs last month. That's only about one-third the number of a year earlier. And it's far fewer than the nearly 54,000 in January 2009 at the depths of the recession.

"If you're bringing value to your company, you don't have to worry," says Mickey Kampsen, president of Management Recruiters of Charlottesville, Va.

Courtney Miller-Rao, 28, is feeling more secure about her job than at any time since she began working a decade ago. She's an auctioneer, selling cars for an auto salvage company near Waterbury, Conn.

"We're growing immensely, we're opening a new branch, selling more cars," she says. "I don't feel like I have to work 10 to 14 hours a day to keep my job."

A bigger factor is that companies have become more productive. After slashing jobs during the recession, they discovered they could produce the same, or more, with smaller staffs.

A company that might have had a half-dozen people working on business development, for instance, might now have three, says Bobbi Moss, vice president of executive recruiters MRINetwork Govig & Associates in Scottsdale, Ariz.

Businesses have created an average of just 82,000 net jobs each month over the past year. That's fewer than half the number a strong economy would be expected to create. It's why so many unemployed people have been left stranded, unable for many months to land jobs.

An average of 4.6 unemployed people are competing for each job opening, the government says. In a healthy job market, no more than two people would be vying for each opening.

"Without employers hiring, it's still pretty tough for the unemployed worker," says Steven Davis, a University of Chicago economist.

In January 2009, Wayne Drescher of Mishawaka, Ind., lost his job of 23 years as an auto-industry engineer. Since then, he's landed just two interviews; neither led to a job.

"I'm 59 years old and for the first time in my life have filed for food stamps," he says. "I have no health insurance at all."

Reports from the Institute for Supply Management indicate that both service and manufacturing companies plan to step up hiring because of a rise in orders.

Even then, many of the unemployed may be left out. That's because even companies that must hire will often avoid unemployed applicants -- especially those who've been out of work for many months.

Some employers worry that workers lose skills when they're idle for months. They also fret that formerly unemployed workers wouldn't stay long in a new job, especially if it carried less pay and stature than their old jobs -- and that they'd quit once a better opportunity arose.

"There's a lot of hiring managers that think that way: 'Only get me people who are already working,'" says Andrew Beck, 59, who's been unemployed since he lost his PR job at a Connecticut hospital chain in March 2009. "They must think we're lazy or we're no good."

Beck estimates he's sent out more than 600 resumes and had 25 interviews in nearly two years. No luck. He and other long-term unemployed are evidence that the longer you're out of a job, the harder it often is to find one.

Lorena Atwell, 47, of Orlando, Fla., has sent out 1,200 resumes since she lost her job as an administrative assistant in October 2008. She's exhausted her 99 weeks of unemployment benefits, burned through her savings and struggled with no health insurance. Now, she and her teenage son get by on child-support payments and food donations from church pantries.

"It's almost like the best of times and the worst of times," Challenger says. "If you're on the outside, you're still having a hard time getting back in . But if you have a job, you're holding onto it. You have more leverage, and you have more confidence."