Violence seems to have ebbed, but protesters refuse to move as President Mubarak remains in power. 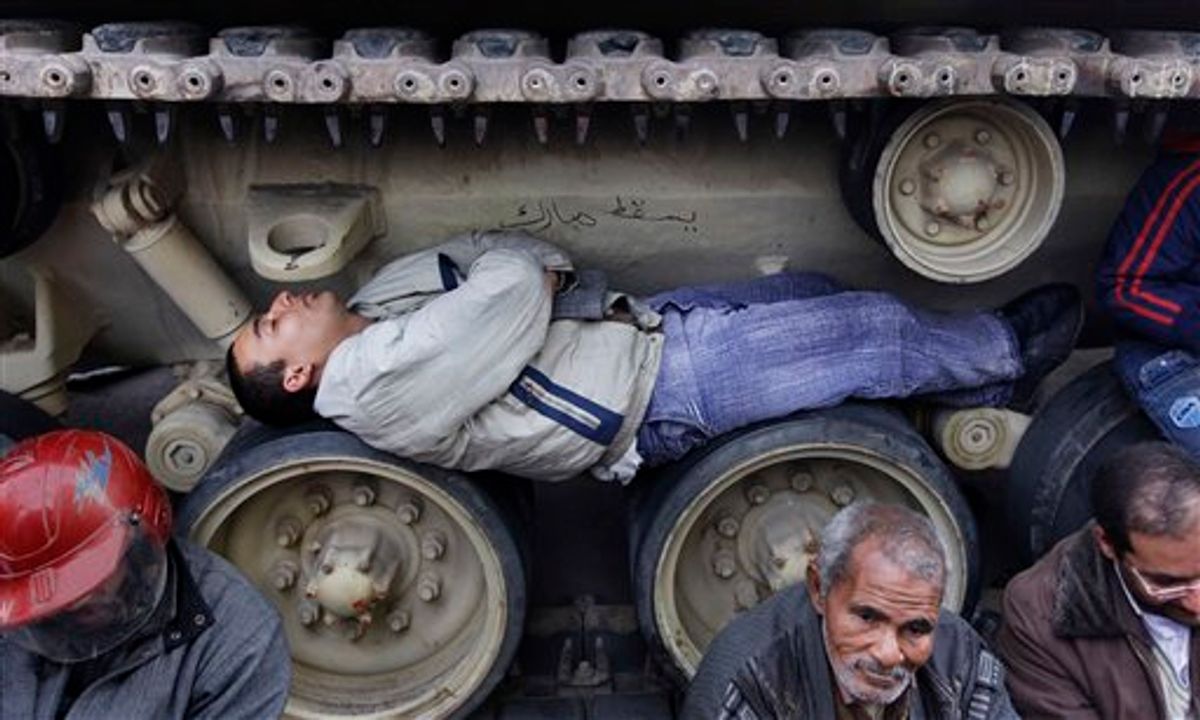 Anti-government protesters sit and lie inside the tracks of an Egyptian Army tank, both to prevent them from moving and to shield themselves from the rain, at the protest site opposite the Egyptian Museum near Tahrir Square in downtown Cairo, Egypt Sunday, Feb. 6, 2011. Egypt's vice president met a broad representation of major opposition groups for the first time Sunday and agreed to allow freedom of the press and to release those detained since anti-government protests began, though Al-Jazeera's English-language news network said one of its correspondents had been detained the same day by the Egyptian military. (AP Photo/Ben Curtis) (AP)
--

The Egyptian government pledged Monday to investigate official corruption and election fraud but thousands of protesters swore not to move from the heart of downtown Cairo until President Hosni Mubarak steps down.

After two weeks of instability that pushed the most populous Arab nation to the edge of anarchy, the crisis appears to be settling into at least temporary stasis.

A series of government concessions have left the protesters dissatisfied but the scene has remained calm, with Tahrir Square resembling a carnival more than the rock-strewn battlefield of recent days.

Mubarak's regime appears confident in its ability for the moment to ride out what remains of an unprecedented storm of unrest, and maintain its grip on power, with Western backing, at least until September elections.

The ruling National Democratic Party won more than 83 percent of the 518 seats in the 2010 parliamentary elections. Implementing the rulings against NDP lawmakers could cause many to lose their seats and force the dissolution of the parliament and new elections if enough are disqualified.

Judicial officials promised to start the questioning on Tuesday of three former ministers and a senior ruling party official who were accused of corruption charges after they were dismissed by Mubarak last week. The cabinet reshuffle was intended to placate protesters by removing some of the most hated officials in the government.

A detained Google Inc. marketing manager who has helped organization anti-Mubarak demonstrations also was expected to be released.

Protesters in the relatively small morning crowd of several thousand on the square said they remained unsatisfied.

"Our main objective is for Mubarak to step down," said student Mohammed Eid. "We don't accept any other concessions."

Inside Cairo's main square, demonstrators were trying to establish an enduring presence, complete with food and entertainment such as strolling musicians and poetry recitals. Many are lying in front of army tanks, or resting on their treads, in attempts to prevent a feared push to move the protesters from the square.

But the army seems to be treating the protesters like a new feature of life downtown in Cairo, which seemed Monday morning to be closer to its normal weekday routine than on any day since the Jan. 25 start of the unrest.

Banks were open for limited hours along with some shops. The stock market remained closed and schools were shut for the mid-year holiday. Traffic was returning to ordinary levels in many places.

The official Middle East News Agency said former Tourism Minister Zuhair Geranah would be questioned Tuesday along with the former ministers of housing and trade.

On Sunday, Egypt's newly named vice president met with the outlawed Muslim Brotherhood and other opposition groups for the first time. He promised a series of concessions including: when security permits, the government will lift nearly 30-year-old emergency laws giving police far-reaching powers for detention and suppression of civil and human rights; the government will no longer hamper freedom of press or interfere with text messaging or the Internet; a committee of judiciary and political figures will study reform the constitution to allow more candidates to run for president and impose term limits on the president; the government will make no recriminations against those participating in the anti-government protests.

Rami Ghoneim, an unemployed internet activist, said the protesters were in no rush to leave so long as their central demand was not met. The more they stay, he said, the more concessions the regime offers.

"It is like a wound, the more you press on it the more blood gushes out. We will press until we empty it," he said.