Is the "pro-business" Obama for real?

The president's polite visit to the Chamber of Commerce marks a change in rhetoric, but not in policy 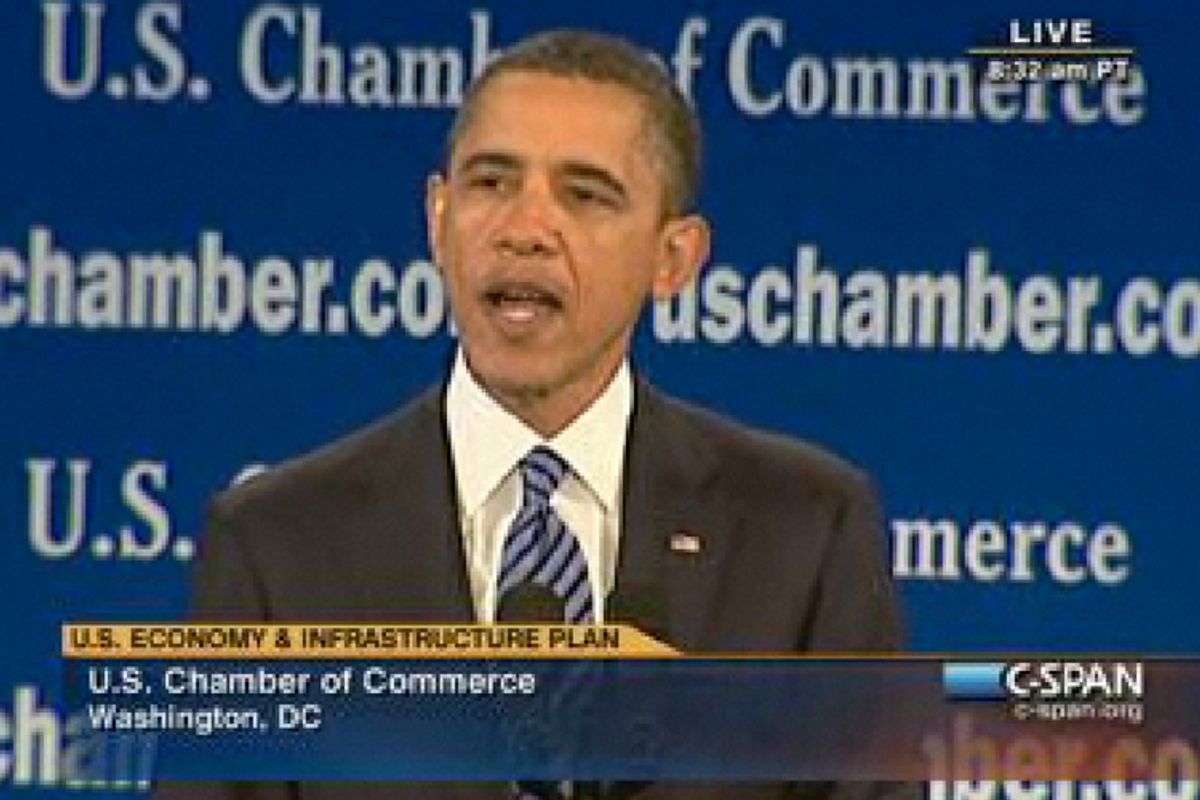 It would be easy to frame President Obama's speech to the Chamber of Commerce on Monday morning as part of an ongoing capitulation to the corporate sector meant to make all those memories of the White House's supposed "anti-business" agenda fade away. Certainly, the rhetoric has changed dramatically. Less than a year ago, Deputy Secretary of the Treasury Neal Wolin gave a speech to the Chamber eviscerating the business lobby for its "shortsighted and misguided" multimillion-dollar campaign to defeat bank reform. The battle lines were clear -- the Chamber was the enemy.

But on Monday, Obama announced that he was visiting the Chamber in an effort to be more "neighborly." He acknowledged past "strong disagreements" with a wry chuckle, and pledged repeatedly that the government and business community "can and must" work together. He promised to work to "eliminate burdensome regulations." He touted plans to boost trade and reform the corporate tax code. No doubt, you could make the case that, chastened after his "shellacking" in the midterm elections, the president was kowtowing to the Chamber.

But as I listened to the speech, which was mostly a tighter, punchier version of Obama's State of the Union address, what I heard was a much stronger defense of regulation than I expected. He called out as necessary both healthcare reform and bank reform -- the two issues that the Chamber of Commerce had been most vociferously intent on attacking. The meat of the speech could even be interpreted as a direct criticism of the Chamber's stance on those issues.

For example, even as we work to eliminate burdensome regulations, America's businesses have a responsibility to recognize that there are some safeguards and standards that are necessary to protect the American people from harm or exploitation.

Few of us would want to live in a society without the rules that keep our air and water clean; that give consumers the confidence to do everything from investing in financial markets to buying groceries. Yet when standards like these have been proposed, opponents have often warned that they would be an assault on business and free enterprise. Early drug companies argued that the bill creating the FDA would "practically destroy the sale of ... remedies in the United States." Auto executives predicted that having to install seatbelts would bring the downfall of their industry. The President of the American Bar Association denounced child labor laws as "a communistic effort to nationalize children."

Of course, none of this has come to pass.

Obama also made a very clear statement of the thesis that most Americans have not benefited as much from globalization and technological progress as much as his audience.

These forces are as unstoppable as they are powerful. But combined with a brutal and devastating recession, they have also shaken the faith of the American people -- in the institutions of business and government. They see a widening chasm of wealth and opportunity in this country, and they wonder if the American Dream is slipping away.

The headlines covering Obama's speech will probably emphasize his apparent newfound desire to accommodate business interests. But practically speaking, he hasn't committed to doing anything but getting rid of some "outmoded" regulations. He strongly defended the principle of regulation, as well as his administration's two flagship achievements -- both of which the Chamber fought to destroy.

Liberals are upset at any sign of accommodation but it might be worth considering the possibility that the notion that Obama is now "pro-business" is just as bogus as the idea that he was ever fundamentally "anti-business" to begin with. But by making the rhetorical shift, Obama appears to have successfully neutered one source of constant criticism that could have been negatively influencing how independent, moderate voters perceived this White House.

After the State of the Union speech, the New Republic's Noam Scheiber argued that Obama wasn't capitulating to business, he was actually "co-opting" it. My initial reaction was skeptical, but after watching Obama before the Chamber of Commerce, I'm not so sure. A Republican president would not have told the Chamber that "the perils of too much regulation are matched by the dangers of too little." And a Republican president certainly wouldn't have been defending the necessity of healthcare reform and new "common sense reforms" for the financial sector -- because those two things would never have happened.