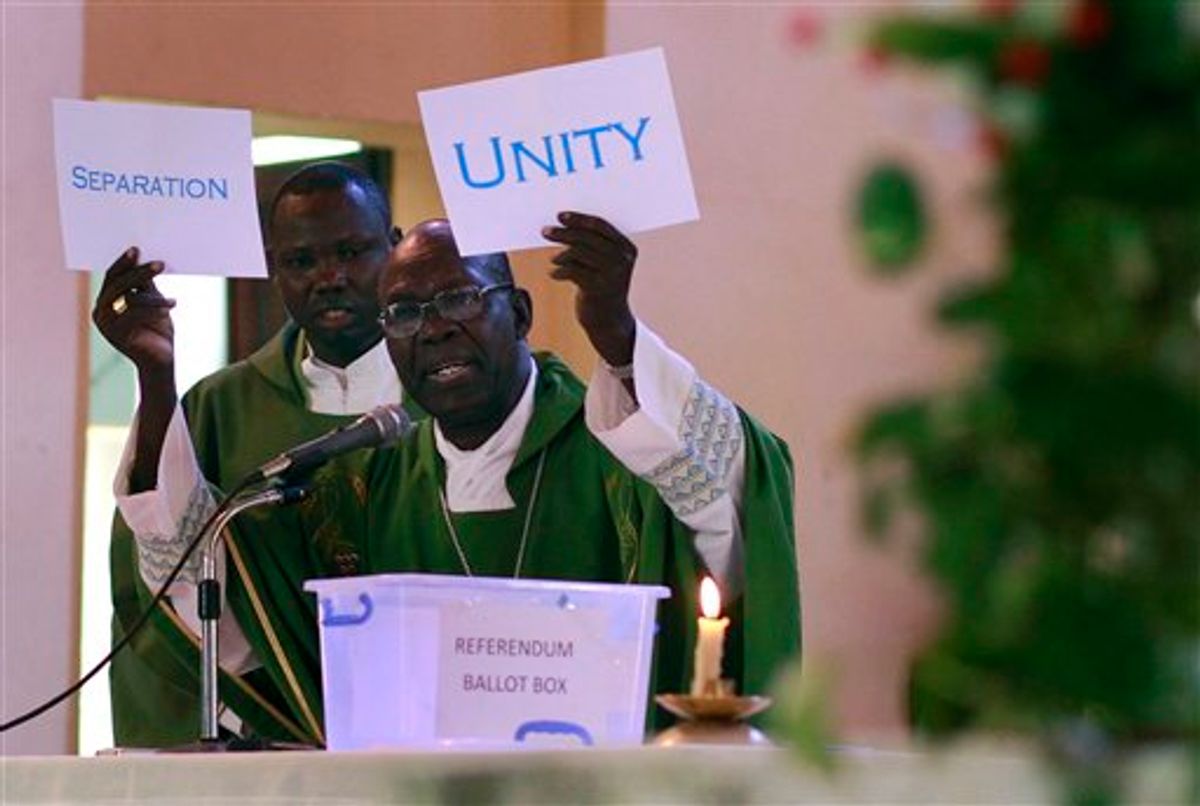 South Sudanese Catholic Archbishop Paulino Lukudu holds up mock ballots during a service attended by President Salva Kiir in Juba, Southern Sudan, Sunday Jan. 16, 2011. The Southern Sudan's president on Sunday offered a prayer of forgiveness for northern Sudan and the killings that occurred during a two-decade civil war, as the first results from a weeklong independence referendum showed an overwhelming vote for secession. About four million Southern Sudanese voters cast their ballots in a weeklong referendum on independence that is expected to split Africa's largest nation in two.(AP Photo/Jerome Delay) (AP)
--

Obama made the announcement Monday in a statement congratulating the people of Southern Sudan for "a successful and inspiring" referendum.

Obama said that after decades of conflict the image of millions of southern Sudanese voters deciding their own future was an inspiration to the world. He also said it's another step forward in Africa's long journey toward justice and democracy.

The United States said Monday it is reviewing its designation of Sudan as a sponsor of terrorism after the African nation accepted the outcome of an independence referendum by South Sudan.

Secretary of State Hillary Rodham Clinton said in a statement that the designation will be lifted if Sudan does not support terrorism for the preceding six months and provides assurance it will not do so in future. It must also fully implement a 2005 peace agreement that ended a two-decade civil war between the north and south that killed more than 2 million people.

"We look forward to working with southern leaders as they undertake the tremendous amount of work to prepare for independence in July and ensure the creation of two viable states living alongside each other in peace," Clinton said.

State Department spokesman P.J. Crowley told a news conference in Washington that the government of Sudan has made clear that it wants normal relations with the United States.

Sudan has been on the U.S. list of states that sponsor terrorism since 1993.