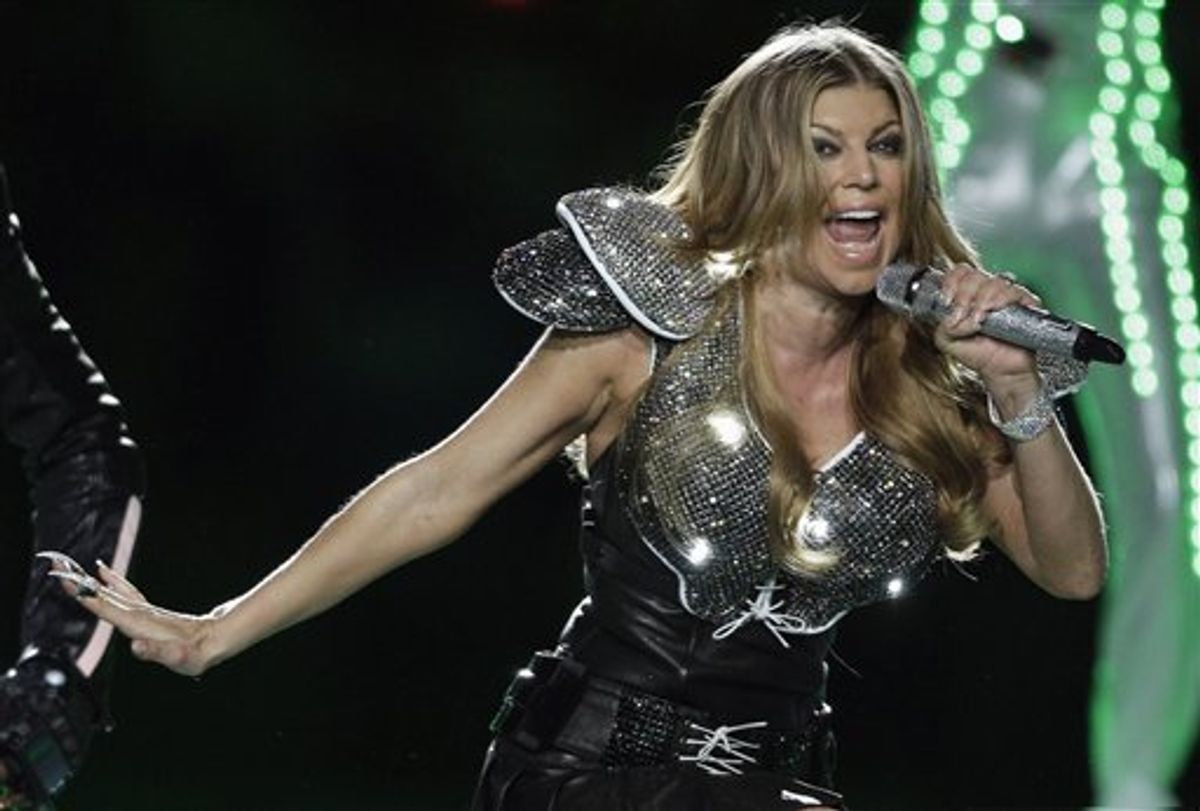 Every January, the president gives a State of the Union address, and a few weeks later, network TV follows, quite accidentally, with its own equivalent: the Super Bowl. In a culturally and politically fragmented culture, it's the biggest (and maybe only) remaining example of true broadcasting, a televised event whose appeal cuts across geographical, political and class lines and that a solid majority of the country watches, discusses and (most important) participates in emotionally. And if you look at the entire evening -- the game itself, the play-by-play commentary, the network promos, and most important, the ads -- you get what always seems, with hindsight, like a Rorschach of the country's psychological state, even if it looks like just another bloated and chaotic TV event while you're watching it. It's a sporting event, but just barely; last night's squeaker of a game, which saw the mostly dominant Green Bay Packers successfully fight off a fourth-quarter rally by the Pittsburgh Steelers for a 31-25 win -- ran over four hours, and most of that was hype, ads and the halftime show.

But nobody parses the timeline that way -- not anymore. We all accept the Super Bowl as less of a game than a pop culture nexus point -- a place where the American self-image asserts itself with familiar rituals (the coin toss attended by past NFL legends, the military jet flyover, the performance of "The Star Spangled Banner" and/or other patriotic favorites) while cautiously acknowledging the present and looking to the future. The Super Bowl's expansive and awkward mix of performers, images, products and messages is a spectacle of its own. Advertising wiz Jerry Della Femina once said, "If politicians have Election Day and Hollywood has the Oscars, advertising has the Super Bowl." Actually, the Super Bowl has aspects of all three.  It's sports, politics, drama, comedy, advertising and marketing; it's a party, a science fair and a report on America's economic health. It's the only major sporting event where A-list names from other walks of life cheerfully become cameo players; John Travolta, Jennifer Aniston, Michael Douglas, Catherine Zeta-Jones, Jesse Jackson, George W. and Barbara Bush, and Condoleezza Rice were all at Cowboys stadium last night.

Douglas, who's been battling cancer for the last couple of years, lent his voice to "The Journey to Super Bowl XVL," a pre-game video montage that uneasily introduced the narrative of the evening: surviving. There were still images and news footage of average Americans bravely muddling through in difficult times (wars, the Great Depression) and rising to inspiring heights even as the world seemed to be going mad around them (JFK, Martin Luther King, the 9/11 first responders). It was typical Super Bowl mythological puffery; whatever hardships the players and coaching staff of the Packers and Steelers endured pale in comparison to what working-class Americans went through in the last few years, and let's not even get into the 1930s. And yet here, as elsewhere on game night, the solemnity and prefab mythmaking was all of a piece (see the Chrysler ad featuring Eminem that simultaneously mythologized Chrysler, Eminem and the city of Detroit). This is a league that designates its yearly championship games with Roman numerals (fancy!), and that created the greatest in-house P.R. machine in pro sports history: NFL Films, an outfit that could make even a tedious stalemate seem as momentous as the battle for the Alamo. As far as the National Football League and its partners are concerned, there are no ordinary events or images, only the Greatest or Finest or Funniest or Most Awesome Things Ever.

And on Super Bowl day, even mundane events feel momentous. The coin toss, for instance, is a moment of Taking Stock in Our Shared History. It marks the passage of time within the NFL and certifies that once-troublesome players are now safe to love. It was both exhilarating and weirdly depressing to see showboater "Neon" Deion Sanders, a two-sport powerhouse and  NFL Hall of Famer whose very existence was once a Taser jolt to institutional complacency, performing the opening toss at Cowboys stadium -- the Super Bowl's version of letting Grandpa carve the turkey. (What a lively elder statesman he's going to make.)

The Super Bowl pre-game musical solos and halftime extravaganzas tell us which veteran pop acts have become safe, beloved institutions (for the first few years of the Super Bowl, halftime entertainment was provided by the likes of Carol Channing, Andy Williams and assorted marching bands) and which relative newcomers have gained a mainstream seal of approval.

Twenty-five years ago, Guns N' Roses was one of the last relevant and dangerous arena-rock supergroups, and one of the most politically divisive. Back then I never would have envisioned guitarist Slash appearing as a guest performer during the Super Bowl halftime show, rising up out of the stage in a light-bulb-trimmed outfit that suggested Uncle Sam by way of Baron Samedi from "Live and Let Die" and soloing with a group like the Black Eyed Peas, aka the "Tron: Legacy" wedding band; but here he was, doing his best to keep a straight face while Peas singer Fergie destroyed "Sweet Child O' Mine." The Peas strutted anxiously on the stage while their microphones failed, their neon-bedecked backup dancers formed Christmas-cookie shapes down on the field, and special guest-gyrater Usher did the splits. I haven't seen such a poorly executed, all-things-to-all-listeners, throw-'em-onstage-and-yank-'em-off grab-bag since the Super Bowl XXXV halftime show, which featured Adam Sandler, Ben Stiller, Aerosmith, 'N Sync, Britney Spears, Mary J. Blige and Nelly.

"Glee" star Lea Michele, whose P.R. team has successfully positioned her as a younger, thinner, 21st century Streisand, sang "America the Beautiful," one of the few patriotic anthems that's actually pleasing to the ear, while Christina Aguilera was tapped for "The Star-Spangled Banner," a song so defiantly unmusical that modern pop stars can't seem to get invested in it except as a showcase for vocal acrobatics. (She screwed it up -- but who among us hasn't?) Too bad the two performers couldn't have switched songs; Michele's sterile brand of belting is better suited to "Banner," while Aguilera, who at her best suggests what might have happened if Madonna and Teddy Pendergrass had a daughter, would have absolutely killed "America the Beautiful."

As is always the case, the ads were the greatest televised inkblot of all -- as revealing a snapshot of their era as fashion trends and chart-topping singles. Super Bowl ads in the 1980s announced the ubiquity of personal computers, the once-threatening baby boom counterculture's transformation into middle-class car and home owners, and the mainstreaming of absurdist humor ("Where's the Beef" commercials and the fast-talking Federal Express ads, for example). In the late 1990s and early aughts, the ads promised a dot-com ascendancy that turned out to be a huge bust and heralded a culture-wide descent into "Idiocracy"-style frat boy juvenilia (it seemed like every other ad featured plastic-titted babes, computer-animated talking animals, a guy suffering a groin injury, or some combination). Beyond the usual long-lead blockbuster movie ads ("Kung Fu Panda 2," "Fast Five," "Cowboys and Aliens"), what really jumped out this year were all the ads that showed how Internet mash-up culture has found its way to Madison Avenue -- and that generally suggested how modern technology has pretty much destroyed our sense of time and space.

Many of the ads seemed to be about Super Bowl advertising -- and about the act of consuming media in general, and about living in a universe where consuming media is the same thing as being alive. Again, all of a piece. A GoDaddy.com "Go girl" ad ended with a chilling image of old Joan Rivers' plasticized face morphed onto a young hottie's body -- Photoshop silliness gone prime time. The ad for NFL's mobile updates showed a fan moving effortlessly through professional and personal spaces while walls and windows collapsed and dissolved and the digital devices on which he received data kept changing in his hands. A moderately funny Bud Light ad sent up product placement in Hollywood movies while cramming the Bud Light logo into every frame, sometimes multiple times. The Kia Optima "One Epic Ride" commercial hopscotched through a variety of blockbuster film genres, including James Bond, sword-and-sorcery, sci-fi, and historical epic. It played like a send-up of overscaled Super Bowl ads and Michael Bay-type films that feel like Super Bowl ads stretched to feature length -- such as Bay's own "Transformers 3," likewise advertised on Sunday. (Down the rabbit hole we go!)

The most endearing and revealing ad, though, was the one celebrating the NFL for having the "Best fans ever." It was composed of nothing but clips of beloved TV characters getting excited about watching the Super Bowl on TV. Television is sports is advertising is history; pop culture devours itself.