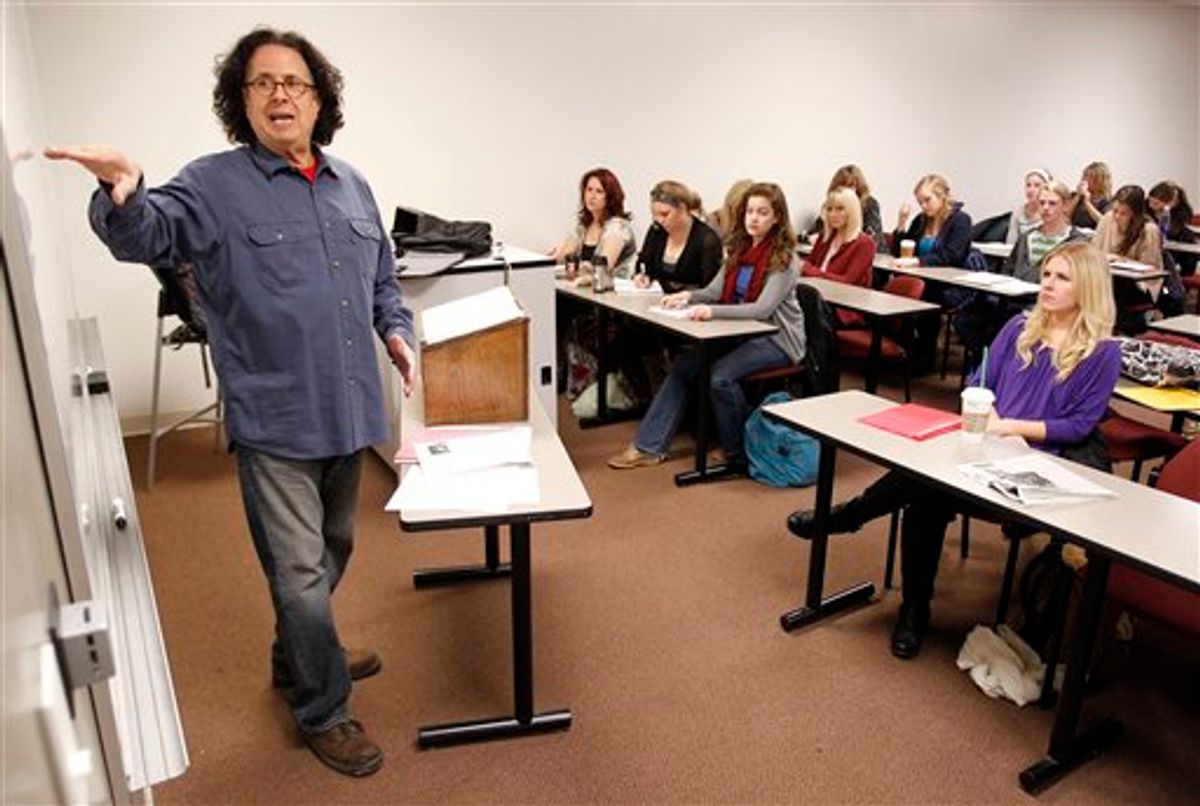 In this Jan. 20, 2011 photo, Mark Volman teaches a class in music management at Belmont University in Nashville, Tenn. Volman, who was a founding member and manager of the music group The Turtles, is an assistant professor and the coordinator of the entertainment industry studies program at Belmont University . (AP Photo/Mark Humphrey) (AP)
--

They may fall off the pop charts, some might even lose the muse. But these days old rock stars need not worry about fading away, not when there's a college classroom nearby.

Rock's gangster of love himself, Steve Miller, created some buzz recently when he became an artist-in-residence at the prestigious University of Southern California's Thornton School of Music. But it turns out the guy who famously proclaimed, "I'm a joker, I'm a smoker, I'm a midnight toker" wasn't nearly the first guitar-slinger to move from the stage to the classroom.

Mark Volman, who co-founded the Turtles and later played with Frank Zappa and the Mothers of Invention, runs the entertainment studies department at Nashville's Belmont University these days when he isn't out on the road singing "Happy Together." Lamont Dozier, one third of the legendary songwriting team Holland-Dozier-Holland, which created hits for everyone from Phil Collins to the Supremes, lectures on his craft at USC. Around the country, everyone from punk rockers to doo-wop harmonizers are holding down teaching positions at big-name universities.

"It brings the subject matter to life for the students in a way that a professor, no matter how well intentioned, just can't do," Chris Sampson, dean of USC's music school, says of turning the classroom over to people like Miller. "It makes all the learning go beyond just theory."

Greg Graffin, who has a Ph.d in science, for example, has taught evolution and paleontology at UCLA in recent years when he wasn't on the road with the seminal punk rock band Bad Religion.

"I know it sounds crazy, but from my perspective the goal is the same," he says of playing music and teaching science. "The thing about the band is we've always been about asking questions and provoking people to think. We never maintain that we have the answers, and that's very consistent with a scientific pursuit."

Meanwhile, Rob Leonard, whose over-the-top version of "Teen Angel" with Sha Na Na at Woodstock can still be found on YouTube, runs the forensic linguistics department at New York's Hofstra University. He reunited with the group last year for a concert at Hofstra marking the university's 75th year.

"I like to say I'm one of the very few people in the world who have worked with the FBI and the Grateful Dead," quips Leonard, who has trained FBI agents in how to analyze language for clues in solving crimes.

The musician, who also has a Ph.d, says he really got interested in linguistics after he asked his record label where all the money from one of Sha Na Na's tours had gone -- because it hadn't gone to the group.

"They said, 'Read the contract,'" he laughed.

That's the message Volman, who began teaching full-time 14 years ago, says he tries to drive home to starry-eyed students every school year. There's more to succeeding in the music business, he says, than just being a great musician.

And for those who may think the music business has evolved too much in recent years for a '60s- or '70s-era pop star to have any relevant advice for students, Volman notes "Happy Together" was downloaded approximately 90,000 times last year.

"And I make 79 cents out of the 99-cent download," he tells the students in his music business class. "It's a lot different than the artist who doesn't own his own music getting 9 cents. I tell them that and they say, 'I want to own my own music too.'"

Music publishing is also one of the areas Miller, who lectures at USC part-time as an adjunct professor because of music commitments, has focused on during his time there.

Volman, although he teaches and runs his department, also still finds time to go out on the road about 50 times a year with the Turtles. It's something that gives him stories to tell the students, as well as ideas for projects to assign involving booking tours.

He'd also like to see more veteran music pros cross over to the classroom, agreeing they bring more to the table in terms of real-life experience. The biggest thing holding most back from teaching full-time, he says, is the advanced degrees required by most universities. He didn't earn a master's degree himself until he was in his 50s.

But once those bridges are crossed, say the musicians who have done it, the rest of the transition isn't that hard.

"I don't feel a lot different between being up on stage at a punk concert and being at the podium in a lecture hall," says Graffin.