The media world is abuzz with speculation about the AOL/HuffPost merger. Can Arianna bring home the bacon? 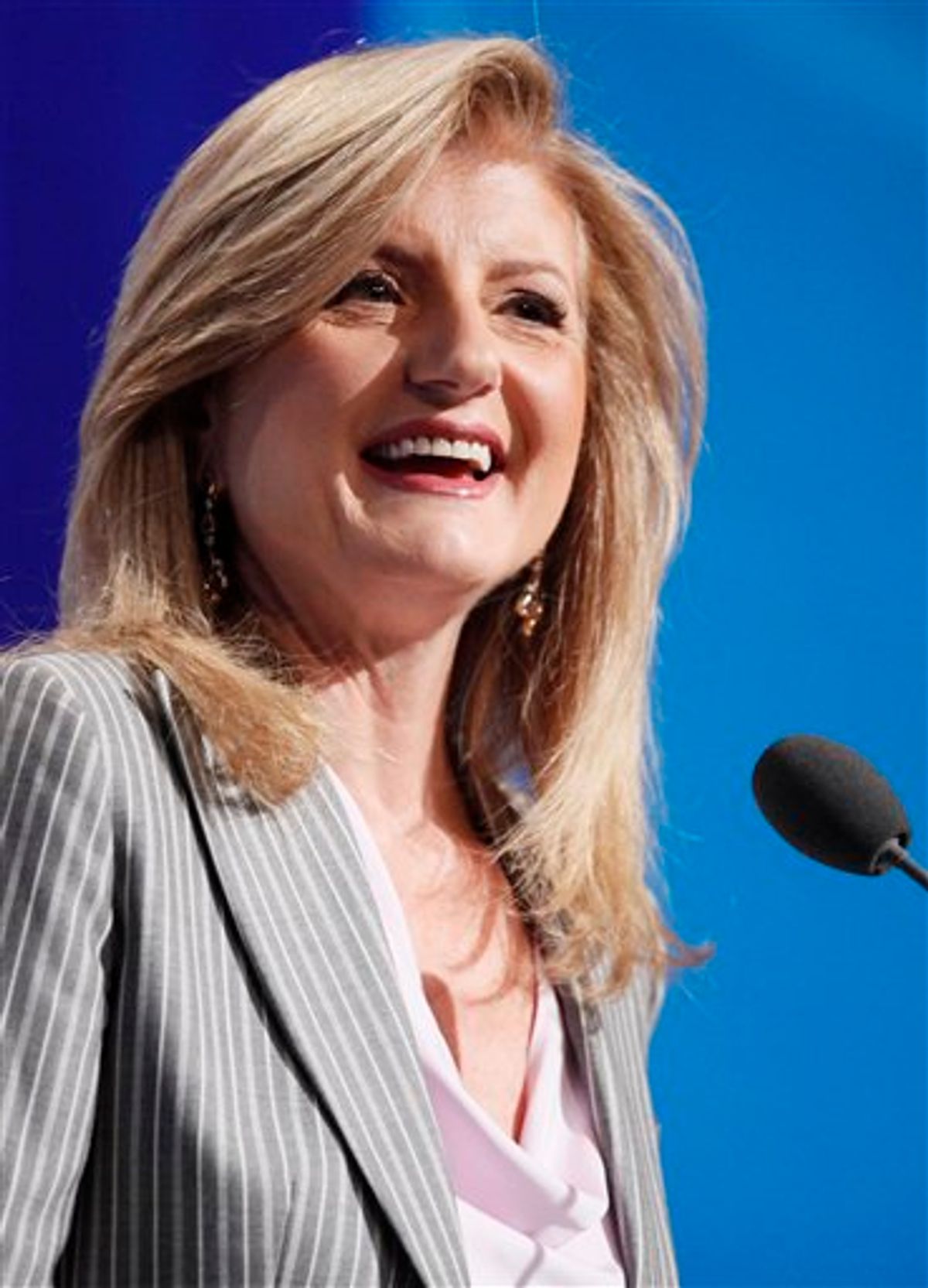 FILE - In this Sept. 23, 2010 file photo, Arianna Huffington speaks at the Clinton Global Initiative in New York. It was announced Monday Feb. 7, 2011 that AOL Inc. is buying online news hub Huffington Post and that Huffington will be put in charge of AOL's growing array of content. (AP Photo/Mark Lennihan, file) (AP)
--

AOL can only hope that longtime political gadfly and budding media baroness Arianna Huffington proves to be as adept at engineering corporate transformations as she has been at personal ones.

Since she became a prominent public figure as the wife of a multimillionaire running for the U.S. Senate in 1994, Huffington has been a darling of Bill Clinton-bashing conservatives and a heroine for liberals railing against President George W. Bush and the Iraq war.

She disavowed have any interest in becoming a political candidate herself during her husband's unsuccessful campaign only to make an aborted run for California governor in 2003. She has been criticized for falling under the influence of self-help gurus and hailed for having the courage to pursue her own convictions.

Along the way, she has been proven she can be both charming and antagonizing -- sometimes all within a few minutes of conversation punctuated in her distinctive Greek accent.

"She is a force of nature. It can really be something to watch her in action," said Jeff Jarvis, a City University of New York journalism professor who has gotten to know Huffington while writing a blog about online media. "She is one of those people who will tell you, 'We simply must do this' and will persuade you to do it. She believes she can change the world."

Huffington, 60, could have her biggest pulpit yet at AOL Inc. It's paying $315 million to buy her news and opinion site, the Huffington Post, and anointing her as its next best hope to orchestrate a long-awaited turnaround at an Internet company that lost its way a decade ago.

After the deal closes this spring, Huffington will oversee most of AOL's content as the company tries to attract more people and sell more ads. The inventory includes technology sites Endgadget and TechCrunch, Patch.com's network of suburban news sites and online mapping service Mapquest. Combined with the Huffington Post, the sites will have a total audience approaching 300 million people worldwide.

"I think that we have an incredible opportunity to tell the stories of our times, at the national level, at the local level and increasingly at the international level," Huffington told The Associated Press during a Monday interview.

Huffington's charisma and the high hopes riding on her were on display when she swung by AOL's New York offices Monday to introduce herself to about 300 employees. They greeted her with a standing ovation, according to Howard Fineman, a Huffington Post employee who accompanied his boss.

"She's the one who had them in the palm of her hand, explaining the mission and telling jokes," said Fineman, who first met Huffington in 1994 while he was at Newsweek magazine writing a story about her. "She's a star."

Although she was already well-known as author and commentator with frequent appearances on TV and radio, Huffington didn't become a really hot commodity until she started the Huffington Post in 2005 with former AOL executive Kenneth Lerer. Backed by just $1 million from her initial investors, Huffington thought there was a place for a site featuring the opinions of her celebrity pals, who would write for free.

The concept was initially ridiculed, but it struck a chord and became more popular as it started to repackage and comment on the top stories from other sites.

By the time AOL came courting, Huffington Post had more than 6,000 unpaid bloggers and a payroll of 210 people who occasionally score their own scoops. It ranks among the Internet's top 10 destinations for cultural and global news with an average of 25 million visitors per month.

The site's success stamped Huffington as the 28th most powerful woman in the world in an October 2010 list compiled by Forbes magazine. She ranked right behind Microsoft Corp. co-founder Bill Gates' wife, Melinda, who just contributed a piece about vaccines to Huffington Post last month. (First Lady Michelle Obama topped that Forbes list).

Long before she became a mover and shaker in her own right, Huffington had developed a knack for finding her way into influential circles. When she married Texas oil scion Michael Huffington in 1987, philanthropist Ann Getty footed the bill, television news personality Barbara Walters was a bridesmaid and the guest list included former U.S. Secretary of State Henry Kissinger. When her 2006 book "On Becoming Fearless" came out in 2006, Silicon Valley billionaire Larry Ellison hosted a reception in his San Francisco home overlooking the Golden Gate Bridge.

"The Internet was invented for Arianna Huffington," Fineman said. "Finally a medium was created for her and allows her to fully be what she was destined to be, which is a global networker."

Most of Huffington's 13 books are about political and social topics. One exception was a biography about Pablo Picasso that stands as testament to her love of art. When she invited a few reporters to join her for a dinner party with music and movie executive David Geffen at her Los Angeles-area home a few years ago, Huffington proudly pointed out a painting the she said was done by Picasso's mistress.

Huffington was born in Athens in 1950 as Arianna Stassinopoulos. After her parents broke up while she was a teenager, she moved to England. She eventually enrolled at Cambridge University, where she would hone her verbal sparring skills as president of the Cambridge Union Society, a debating club dating back to 1815. She would also get a master's degree in economics.

After college, she developed a fascination with self-help philosophies that are said to still influence her today. She once was friendly with Werner Erhard, the founder of the self-help program "est," in the 1970s and later became a minister of in the Movement for Spiritual Inner Awareness founded by a man who would become known as "John-Roger." That connection came back to haunt her after published stories aired allegations of sexual and financial abuse against John-Roger.

Huffington embraced the conservative views of her husband, Michael, who was elected as a California congressman representing the Santa Barbara area in 1992. He then mounted a 1994 bid for a Senate seat against Dianne Feinstein. Arianna campaigned hard for her husband, but Michael Huffington lost, even after spending $28 million of his own fortune.

After that setback, Arianna Huffington remained a staunch Republican who backed then-Speaker of the House Newt Gingrich.

Her politics began to lean to the left following her 1997 divorce from Michael Huffington, who later made even more news by revealing he was bisexual. The Huffingtons have two daughters, Christina, now 21, and Isabella, 19. They both attend Yale University.

"When you start looking for someone who's got her set of mind and personality, it's just real hard to find, left, right or center," Blankley says.