The Egyptian government continues to obstruct journalists from covering the protests, according to reports 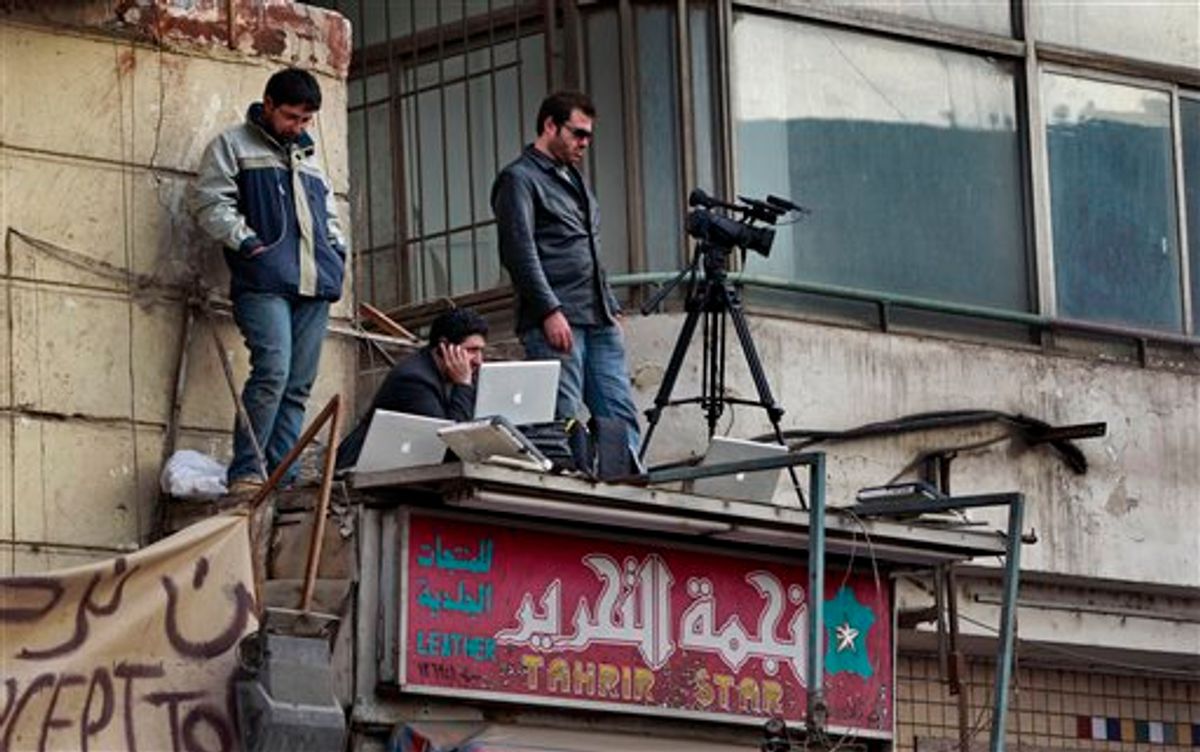 A television cameraman and colleagues standing on the awning of a shop transmit footage by satellite-phone of the continuing protest in Tahrir Square in downtown Cairo, Egypt Monday, Feb. 7, 2011. Egypt's embattled regime announced Monday a 15 percent raise for government employees in an attempt to shore up its base and defuse popular anger but the gestures so far have done little to persuade the tens of thousands of protesters occupying Tahrir Square to end their two-week long protest, leaving the two sides in an uneasy stalemate. Name of shop on sign in arabic reads "Tahrir Star Leather". (AP Photo/Ben Curtis) (AP)
--

Egypt's military was not allowing foreign journalists to enter Cairo's Tahrir Square on Tuesday, part of what an international press watchdog called new obstacles in covering the ongoing crisis.

Tens of thousands of Egyptians have been demonstrating in downtown Cairo, calling for the ouster of President Hosni Mubarak. Journalists from all over the world had been mingling among them until Tuesday.

The government issued new orders requiring visiting journalists get accreditation from the Ministry of Information, a process that takes days. Foreign journalists already with credentials were allowed into the square.

The Committee to Protect Journalists says the military has been increasingly involved in interfering with reporters' work.

"The sudden change in policy regarding press credentials is simply the latest effort to restrict the work of journalists, many of whom have already been beaten by mobs and detained by authorities," Joel Simon, the group's executive director, said in a statement.

"The military has become the predominant force detaining journalists and confiscating their equipment rather than plainclothes police or government supporters," it added.

In the past few days, a number of journalists, including two from the English-language Al-Jazeera news channel, have been detained by military intelligence for hours.

Rosa Mollo, the Middle East correspondent for Spain's TVE station, said she and her crew were prevented from entering the square Tuesday morning, despite assurances from the press center that they would be allowed in while their new credentials were being processed.

"At the first checkpoint, the military guy told me we have clear orders today that journalists must have accreditation because we have found several foreign spies inside and the media has been distorting the facts," she said.

Since Jan. 30, the committee said there have been at least 140 direct attacks on journalists trying to cover the ongoing unrest in Egypt.