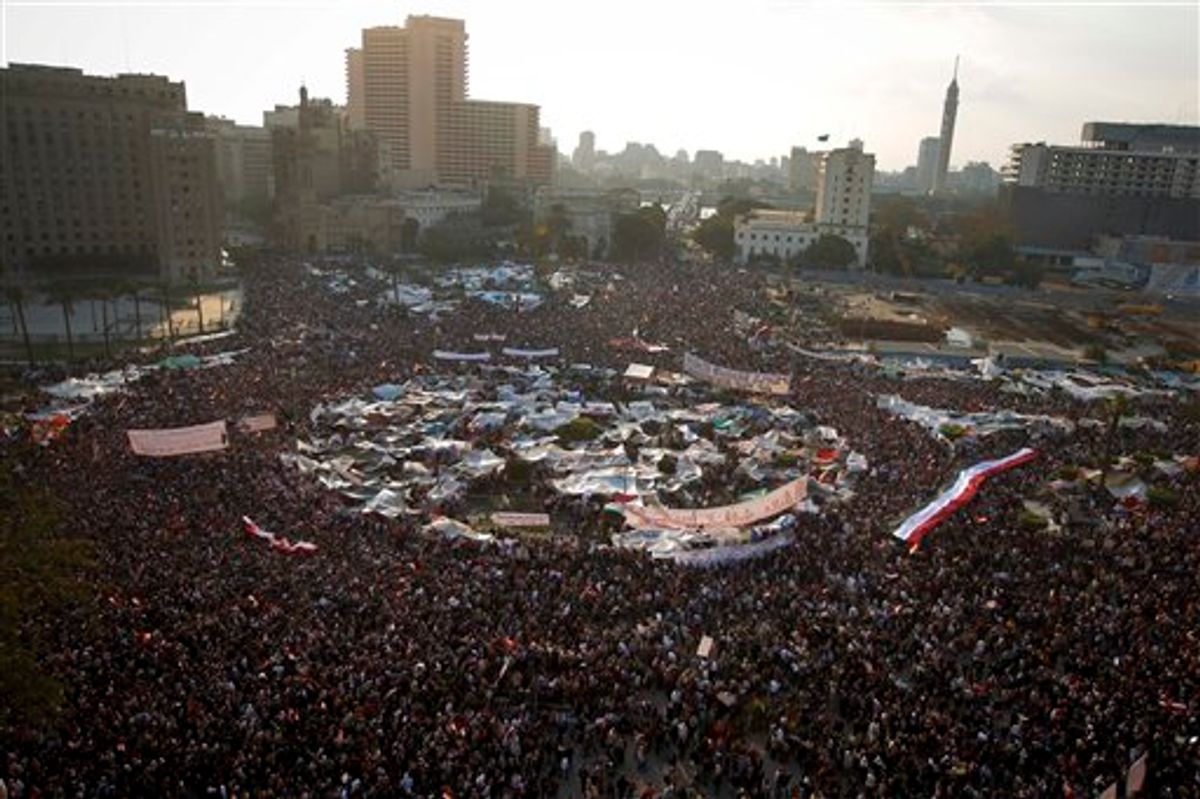 Anti-government protesters demonstrate in Tahrir Square, in Cairo, Egypt, Tuesday, Feb. 8, 2011. Protesters appear to have settled in for a long standoff, turning Tahrir Square into a makeshift village with tens of thousands coming every day, with some sleeping in tents made of blankets and plastic sheeting. The arabic on the sign reads "The rage brings the light of freedom". (AP Photo/Tara Todras-Whitehill) (AP)
--

Vice President Omar Suleiman warned Tuesday that "we can't put up with" continued protests in Tahrir for a long time, saying the crisis must be ended as soon as possible in a sharply worded sign of increasing regime impatience with 16 days of mass demonstrations.

Suleiman said there will be "no ending of the regime" and no immediate departure for President Hosni Mubarak, according to the state news agency MENA, reporting on a meeting between the vice president and the heads of state and independent newspapers.

He told them the regime wants dialogue to resolve protesters' demands for democratic reform, adding in a veiled warning, "We don't want to deal with Egyptian society with police tools."

At one point in the roundtable meeting, Suleiman warned that the alternative to dialogue "is that a coup happens, which would mean uncalculated and hasty steps, including lots of irrationalities. We don't want to reach that point, to protect Egypt."

Pressed by the editors to explain the comment, he said he did not mean a military coup but that "a force that is unprepared for rule" could overturn state institutions, said Amr Khafagi, editor-in-chief of the privately-owned Shorouk daily, who attended the briefing. "He doesn't mean it in the classical way."

"The presence of the protesters in Tahrir Square and some satellite stations insulting Egypt and belittling it makes citizens hesitant to go to work," he said. We can't put up with this for a long time, and this crisis must be ended as soon as possible.

He warned that calls by some protesters for a campaign of civil disobedience are "very dangerous for society and we can't put up with this at all."