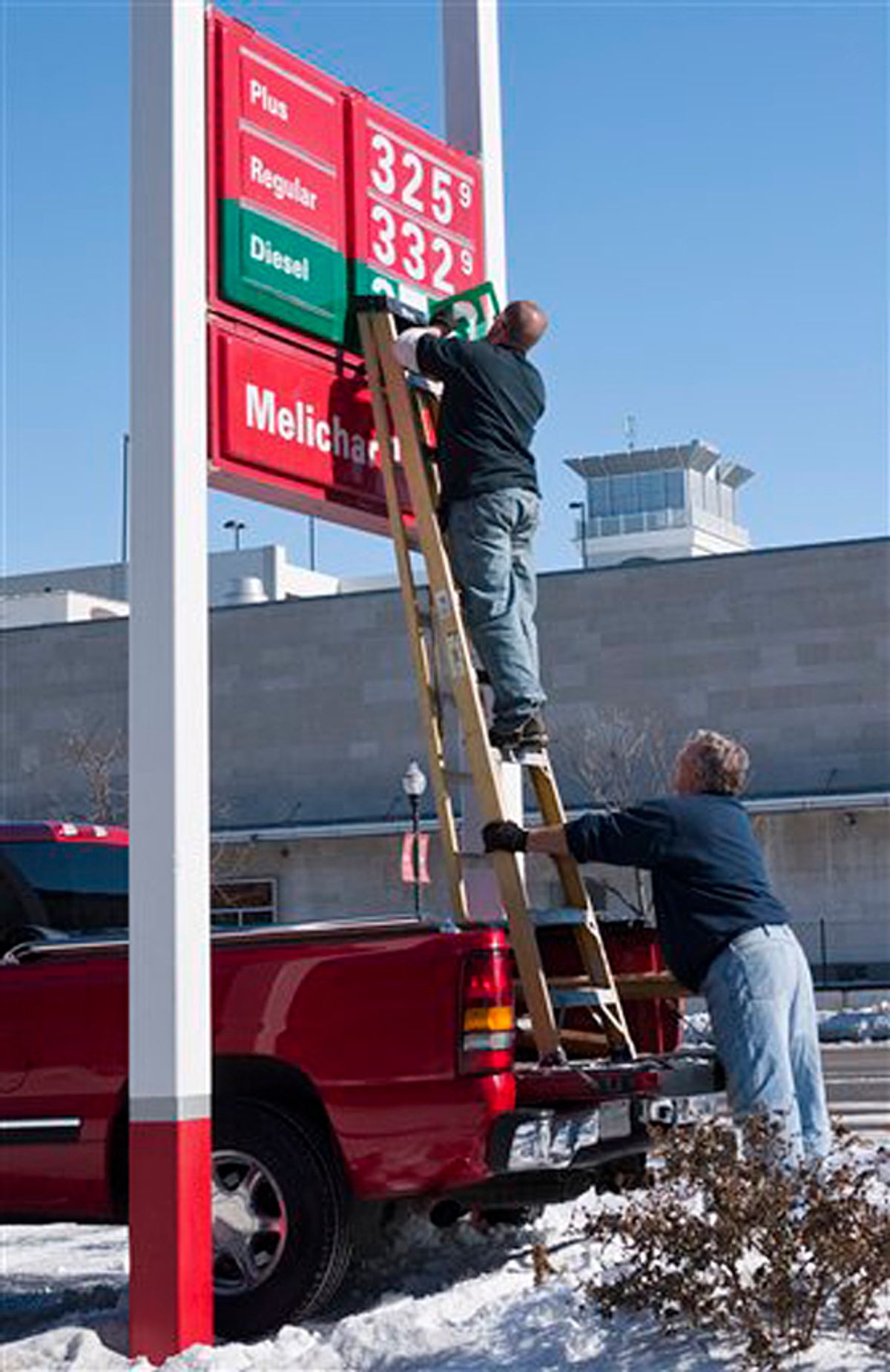 The price of fuel is adjusted at a gas station in Lincoln, Neb., Thursday, Feb. 3, 2011. Gasoline prices increased less than a penny overnight to a national average of $3.116 per gallon, according to AAA, Wright Express and Oil Price Information Service. A gallon of regular is 4.3 cents higher than a month ago and 46 cents more expensive than a year ago.(AP Photo/Nati Harnik) (Nati Harnik)
--

Here's something to watch as U.S. gas prices continue to rise to points not seen since the height of the financial crisis: Republicans busily rewriting history in a tired effort to prove that an unregulated free market is the answer to all our energy woes. The last time oil prices spiked, Democrats controlled both the House and Senate, so the long-standing GOP penchant for revisionism had no practical impact. But now Republicans are back in power in the House, and the wayback machine is revving up.

For example: Jon Chait flags an encomium to the glory days of Ronald Reagan's energy policy, written by the new chairman of the House Energy and Commerce Committee, Fred Upton, that enormously misrepresents what actually happened. Let's take a closer look:

Reagan inherited all the energy policy mistakes of the 1970s -- a decade in which every energy challenge was met with ill-advised federal programs and mandates.

For example, domestic oil production was hampered by a convoluted system of price controls that favored imports while sparking shortages and gas lines -- ironic, since they were touted as the answer to OPEC and a benefit to consumers. Just one week after his inauguration in January 1981, Reagan issued an Executive Order sweeping away this market interference.

Lamenting that "restrictive price controls have held U.S. oil production below its potential," Reagan said that eliminating them "is a positive first step towards a balanced energy program."

Within a few years, domestic oil production went up -- and prices went down. Affordable energy helped usher in a quarter century of phenomenal economic growth.

Fred Upton served in the Office of Management and Budget from 1981 to 1985 during the Reagan administration, so maybe he can be excused for not paying  close attention to what was happening in energy markets at the time.  First of all, it was Jimmy Carter who did the bulk of the work in eliminating price controls, starting in 1979. Reagan just finished the job. Without any action by Reagan all oil price controls would have ended by October 1981 -- Reagan accelerated the process by 10 months.

Prices did indeed fall, and dramatically so. The deregulation of price controls played a partial factor, but the consensus view of most oil market analysts is that the key factors in the price drop were a recession-induced collapse in demand combined with an unrelenting surge in global oil production. The oil shocks of the 1970s inspired a worldwide search for non-OPEC sources of oil and created a de facto oil glut. North Sea oil production, for example, surged in the early '80s.

The collapse in demand and the boost, during Reagan's first term, for domestic production did mean that the percentage of U.S. consumption accounted for by imported oil plummeted from its late '70s high, but again, by the end of his second term, the reversal of those two trends resulted in a sustained surge in imports.

There's really no other way to tell the story. Reagan was extraordinarily lucky. He came into office at the exact moment when demand for oil was crashing while supply was simultaneously surging, and the consequent rock-bottom low oil prices gave the U.S. economy a much-needed turbo boost. But it was a short-term fix, and Reagan did absolutely nothing to prepare his country for the long-term picture. Quite the opposite: He gutted Carter's attempts to boost renewable energy development.

Fred Upton blames restrictions on offshore development for the fact that the U.S. now imports 70 percent of its oil. But if he was honest, he'd be pointing the finger at the great Gipper, instead of praising him.

Energy How The World Works Ronald Reagan The Republican Takeover