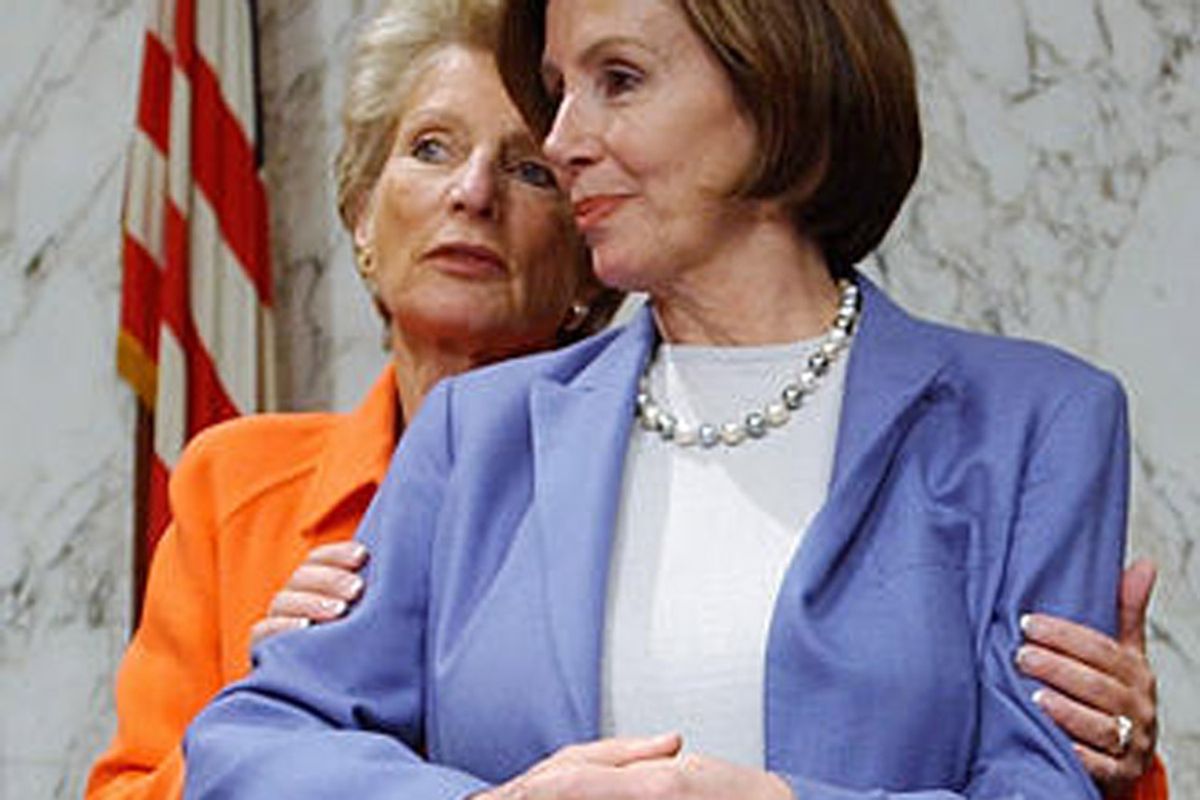 Officially, Jane Harman's career in Congress will come to a close in the next few weeks, when the California Democrat steps down in the middle of her ninth term to become the new president of the Woodrow Wilson Center in Washington. In reality, though, it's been over for years now -- ever since Harman crossed Nancy Pelosi and Pelosi responded by shutting down Harman's power center in the House (and her vehicle for national television exposure).

The break had its roots in the Iraq war, and Harman's role as the top Democrat on the House Intelligence Committee when it was launched, and as the occupation turned sour. A "select" panel, Intelligence is unique from other House committees in that it's composed of an equal number of Democrats and Republicans; members are privy to sensitive documents and top-level security briefings, and the idea is that their work on the committee is above partisan politics.

The problem, from Pelosi's standpoint, is that Harman's status as the No. 1 Democrat on Intelligence essentially made her the highest-profile House Democrat in the middle of the last decade. At the time, don't forget, Republicans had been running the House for a decade, and they also controlled the White House and Senate. To the national media, Pelosi, who was elected the Democrats' House leader in 2002, was a bit player, especially on matters of national security and foreign policy. Her caucus had little clout, and the press mostly tuned her out. When television news producers needed a congressional Democrat to discuss Iraq, they gravitated toward Harman; at least she (theoretically) spoke with the benefit of intelligence information few others had access to. On one stretch in 2006, as the war spiraled out of control, Harman was on a Sunday morning news show four times in a six-month stretch; Pelosi's total: zero.

"Maybe it's my 15 minutes of fame, maybe it's longer," Harman said as her exposure increased. "This is why I came here."

But Harman didn't used her platform the way Pelosi wanted her to. Instead of aggressively challenging the Bush administration over Iraq and its intelligence-gathering operations, she developed a reputation for cooperative work with the panel's Republicans and, in the eyes of many war critics, acquiescence to the White House's position. By 2005, Pelosi indicated that she would force Harman out as ranking member after the 2006 elections. Technically, Pelosi cited term limits; members had traditionally rotated off the committee after four terms, but that unofficial limit was easy to get around. Harman, one of the wealthiest members of Congress who enjoys personal relationships with many elite party donors, responded by enlisting her friends and allies in a pressure campaign. That only irritated Pelosi, who dug in her heels, insisting that Harman would be forced to leave the committee.

The tension was especially notable because of how close Pelosi and Harman had once been. Pelosi had already been in the House for six years when Harman, elected to represent a Southern California district, arrived in 1993, although they'd known each other for years, dating back to Pelosi's days as chairwoman of the California Democratic Party. Pelosi was among those who encouraged Harman when she gave up her seat to run for governor in 1998, an effort that ended with a dismal third-place showing in the Democratic primary. Pelosi then recruited Harman to seek her old House seat, which had fallen into Republican hands, in 2000. As an inducement, she and Democratic leaders promised to restore Harman's seniority -- meaning her position on the Intelligence panel, where Pelosi was then the ranking member. When Pelosi rotated off the panel in January 2003, months after winning election as minority leader, she installed Harman as her replacement as ranking member. It was a move not without controversy; members of the Congressional Black Caucus believed the spot belonged to one of their own, Georgia Rep. Sanford Bishop, who would have been in line had Harman's old seniority not been factored in. But Pelosi gave the job to Harman, a testament to the strength of their alliance at that time.

In the 2006 midterm elections, Democrats won back the House for the first time since 1994. Harman, despite being publicly rebuffed by Pelosi for the better part of two years, still hoped to persuade the speaker-to-be to let her keep the Intelligence slot; with Democrats in the majority, Harman would be the chairwoman. Harman allies, including some friendly media members, followed up by painting Pelosi's decision as her first major test: Would she prove she was "serious" about national security and keep Harman around? But Pelosi didn't even nibble. Harman was given the boot and the chairmanship went to Texas Rep. Silvestre Reyes (with Pelosi passing over Alcee Hastings, the Florida congressman who was technically behind Harman and who, as a federal judge, had been impeached in the 1980s).

It's not fair to say that Harman has been irrelevant since that moment. She is, after all, still frequently quoted in news article and is a regular on the cable news circuit. But life in the House hasn't been the same for her, either, these past four-plus years. Pelosi's move severely reduced her clout within the House, and her visibility has been eclipsed by Pelosi and several other House Democrats these past few years. There was speculation at the end of 2006 that Harman would leave the House without her Intelligence gig, but she stuck it out -- initially, perhaps, in the hope of landing a Cabinet post (Homeland Security was mentioned in the press) in a Hillary Clinton administration (Harman endorsed the former first lady in the Democratic primaries), and then (perhaps) to use the 2010 election to win a measure of vindication after being linked to an espionage scandal involving AIPAC in 2009.

Maybe if Pelosi had walked away from Congress after last November's Republican triumph Harman wouldn't now be leaving Congress. A new leader might have looked differently on Harman and her credentials. But Pelosi stayed, and as long as she's around, there's really no room for Jane Harman to do much in the U.S. House. And so now, finally, she's leaving.