Egypt's president finally seems to be moving on reforms. But will it be enough? 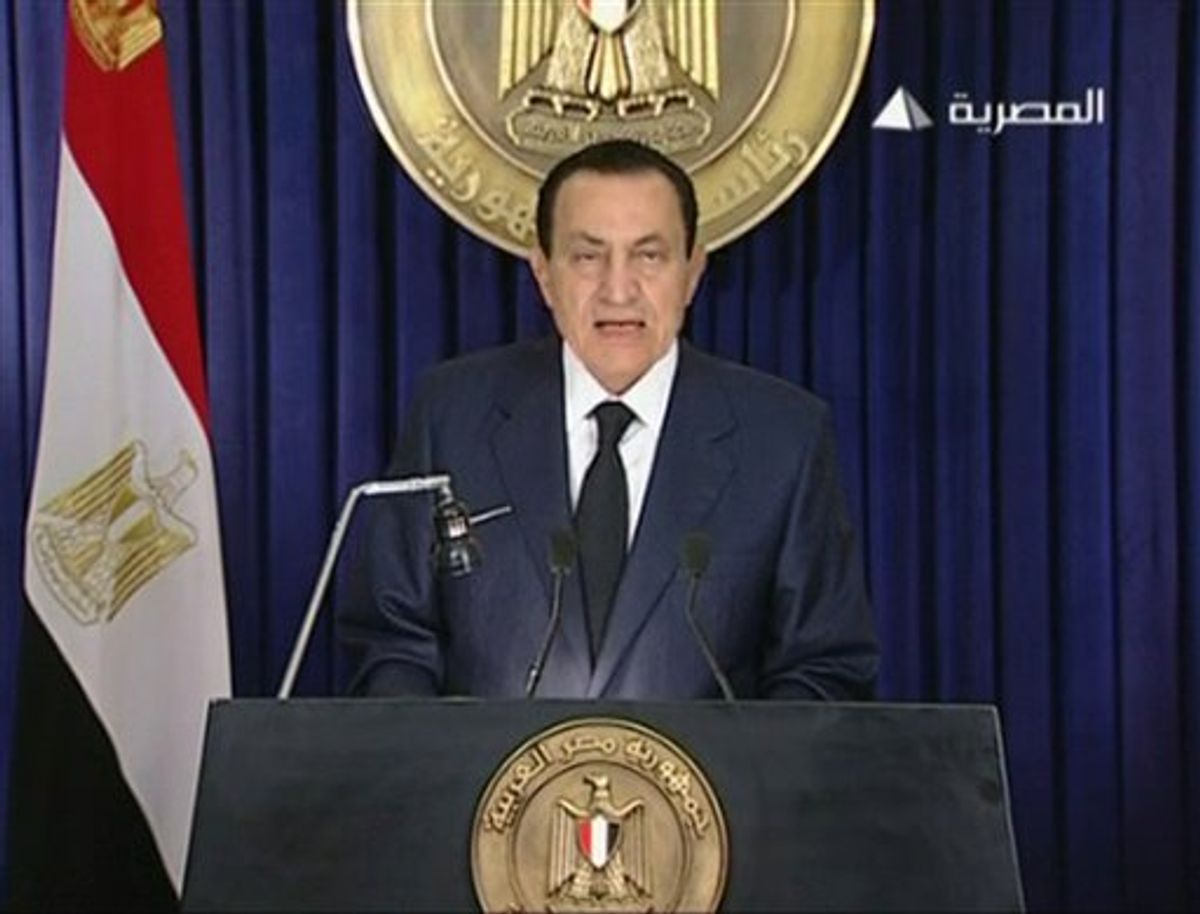 In this image from Egyptian state television aired Tuesday evening Feb. 1, 2011, Egyptian President Hosni Mubarak delivers an address announcing he will not run for a new term in office in September elections, but rejected demands that he step down immediately and leave the country, vowing to die on Egypt's soil. (AP Photo/Egyptian State Television via APTN) EGYPT OUT TV OUT (AP)
--

Mubarak's decrees were announced on state television by Vice President Omar Suleiman, who also said that Mubarak will set up a separate committee to monitor the implementation of all proposed reforms. The two committees will start working immediately, he said.

The government has promised several concessions since the uprising began on Jan. 25 but has refused the protesters' main demand that Mubarak step down immediately instead of staying on through September elections. Tuesday's decision was the first concrete step taken by the longtime authoritarian ruler to implement promised reforms.

Mubarak's efforts to stay in office got a boost from the Obama administration, which conceded that it will not endorse calls for the president's immediate departure, saying a precipitous exit could set back the country's democratic transition.

After several days of mixed messages about whether it wants to see Mubarak stay or go, Washington stepped up calls for a faster, more inclusive national dialogue on reform in Egypt. Under Egypt's constitution, Mubarak's resignation would trigger an election in 60 days. U.S. officials said that is not enough time to prepare.

"A question that that would pose is whether Egypt today is prepared to have a competitive, open election," State Department spokesman P.J. Crowley said. "Given the recent past, where, quite honestly, elections were less than free and fair there's a lot of work that has to be done to get to a point where you can have free and fair elections."

"I think that would be a challenging undertaking," he said.

Mubarak also ordered a probe into last week's clashes between the protesters and government supporters as well as mass detentions of human rights activists and journalists. The committee will refer its findings to the attorney-general, Suleiman said.

"The youth of Egypt deserve national appreciation," he quoted the president as saying. "They should not be detained, harassed or denied their freedom of expression."

The committee considering constitutional and legislative changes will be led by the head of Egypt's highest appellate court and composed of six senior judges and four constitutional experts, according to a statement issued later by the official news agency MENA. It will make its recommendations to Suleiman by the end of this month.

The latest government announcement came two days after Suleiman met for the first time with representatives of opposition groups, including the outlawed Muslim Brotherhood -- the country's largest and best organized opposition group -- to debate a way out of the ongoing political crisis.

The fundamentalist Islamic group issued a statement earlier Tuesday calling the reforms proposed so far as "partial" and insisting that Mubarak must go to ease what it called the anger felt by Egyptians who face widespread poverty and government repression.

The Brotherhood also accused pro-Mubarak thugs of detaining protesters, including Brotherhood supporters, and handing them over to the army's military police who torture them.

"We call on the military, which we love and respect, to refrain from these malicious acts," said the statement.

Thousands of protesters, meanwhile, remained camped out in the central Tahrir Square, many hoping for an appearance by Google Inc. executive Wael Ghonim, a 30-year-old marketing manager who has emerged as a rallying point after he was released Monday after 12 days in custody.

About 90,000 people have joined a Facebook group nominating Ghonim to be their spokesman. Many demonstrators reject a group of officially sanctioned and traditional Egyptian opposition groups that have been negotiating with the government on their behalf in recent days.

Some on the square chanted "Wael Ghonim is coming today," although reports that he planned to appear couldn't be confirmed.

Protesters have lacked a clear, representative voice and many worry the traditional parties are trying to hijack the uprising, which began when activists used the Internet's social networks to mobilize the hundreds of thousands who first took to the streets.

The demonstrators have said they would not enter negotiations with the regime before Mubarak's departure. Mubarak insists that he intends to serve the remainder of his current, six-year term, which expires in September, and that he would die in Egypt, thus rejecting any suggestion that he should leave the country.

Protesters appear to have settled in for a long standoff, turning Tahrir Square into a makeshift village. Tens of thousands come every day, with some sleeping in tents made of blankets and plastic sheeting.

At mid-morning Tuesday, volunteers swept the dusty grounds, as several thousand milled in the plaza. Impromptu security details, including young girls in headscarves, screened visitors for weapons at the square's entrances. At a field hospital in a small mosque bordering the square, nurses sorted donated medicines. The mother of a young man wounded in the clashes stood near one of the entrances, silently holding up his bloodied shirt.

Graphic designer Walid Abdullah, 41, sporting a stubble and a black-and-white checkered scarf wrapped around his head, said he's been in the square from the start. Like many of the protesters, he said he will not leave until Mubarak steps down.

"There's no such thing as a half-revolution," said father of three Abdullah, who lives on $335 a month.

U.S.-based Human Rights Watch has told The Associated Press that two weeks of clashes have claimed at least 297 lives, by far the highest and most detailed toll released so far. It was based on visits to seven hospitals in three cities and the group said it was likely to rise.