Ron Paul will ruin the dreams of the 2012 fringe candidates

If the original Tea Partyer runs for president again, no one will notice all the other lovable losers 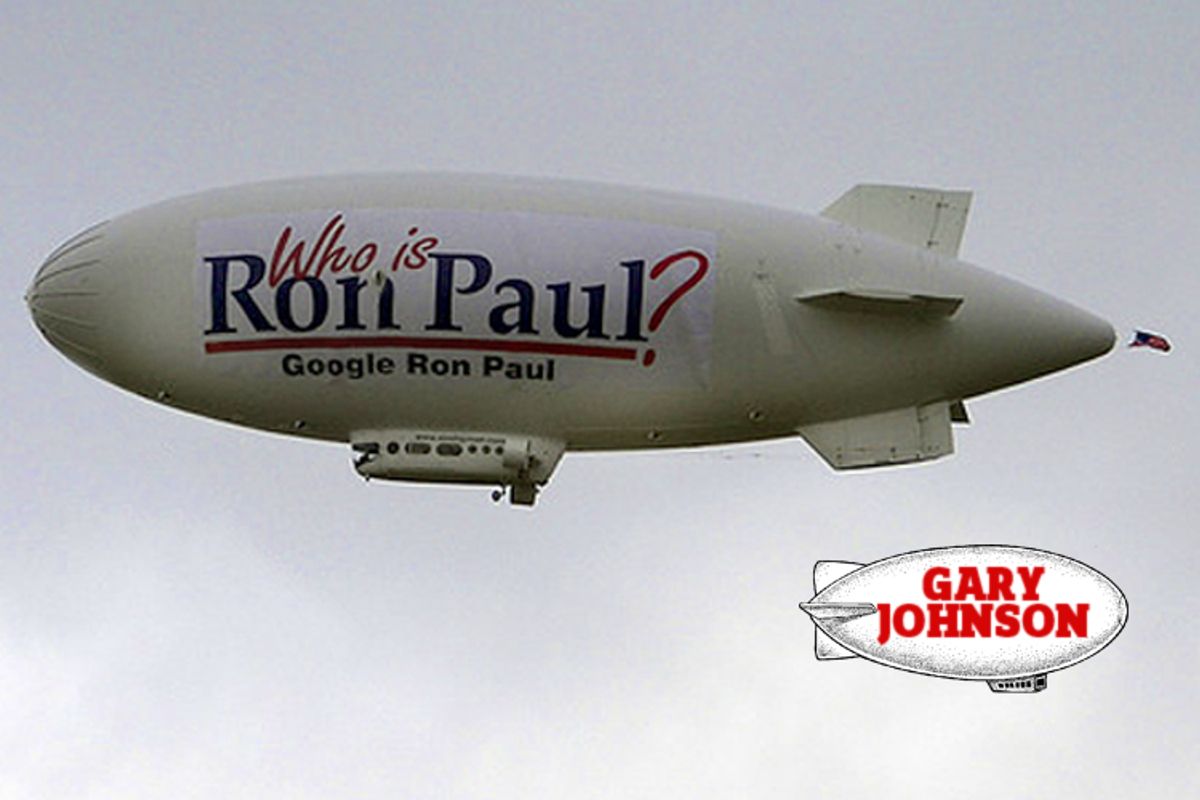 Ron Paul is going to run for president again, and why not: It's his moment. The Republican Party borrowed his rhetoric wholesale (without also borrowing his principles) and used that "libertarian independent" magic to revitalize its tarnished brand. So why shouldn't the good doctor make another go of it? He's the original Tea Partyer and so on.

And so despite the fact that he'll be 77 on Election Day 2012, Paul is headed to Iowa, to deliver one of those speeches that candidates have to give, to weird groups that relish the opportunity to make would-be presidents dance.

This is good news, obviously, for Liberty -- political scientists estimate that adding Ron Paul to a Republican presidential debate increases that debate's Liberty by a factor of 12 -- but it is bad news for every other fringe candidate who hoped to be 2012's Ron Paul. Dave Weigel already pointed out the obvious loser: former New Mexico Gov. Gary Johnson, who appeals to professional libertarians because he's younger and less ... quirky than Paul.

(Although Paul is quirky in a way that has caught on, because his primary obsessions could be adopted by less fringey Republicans: "Audit the Fed" is more acceptable for the GOP than Gary Johnson's pet cause, "stop locking everyone up for doing drugs.")

Paul in the race means less media oxygen for Johnson (because Ron Paul will use all of that oxygen to fill his blimp). And Gary Johnson was like a top-tier third-tier candidate! Do you know what this means for Herman Cain? He will not even get the satisfaction of being next year's Republican Mike Gravel, because Paul, with his army of Internet fans, has the force of Gravel and Kucinich and Sharpton. (If John Bolton ends up running, he can be Carol Moseley Braun.)

The prospect of Paul entering the race probably isn't just upsetting those on his side of the libertarian/Huckabee divide. He'll take precious attention away from everyone else who has no shot at winning the nomination but who wanted to be followed around by reporters for a while. (Mike Pence's preemptively dropping out suddenly looks brilliant.) I can't imagine Rick Santorum competing for airtime with him. And saying "I'm the original Tea Partyer" will just sound silly when the actual original Tea Partyer is there.

While I always welcome another Ron Paul campaign, if only because he might yell at Rudy Giuliani again, everyone who isn't Mitt Romney (or Jeb Bush? or ... Mike Huckabee?) is probably praying for Dr. Paul to stay home.