Silvio Berlusconi: The story behind the sex scandals 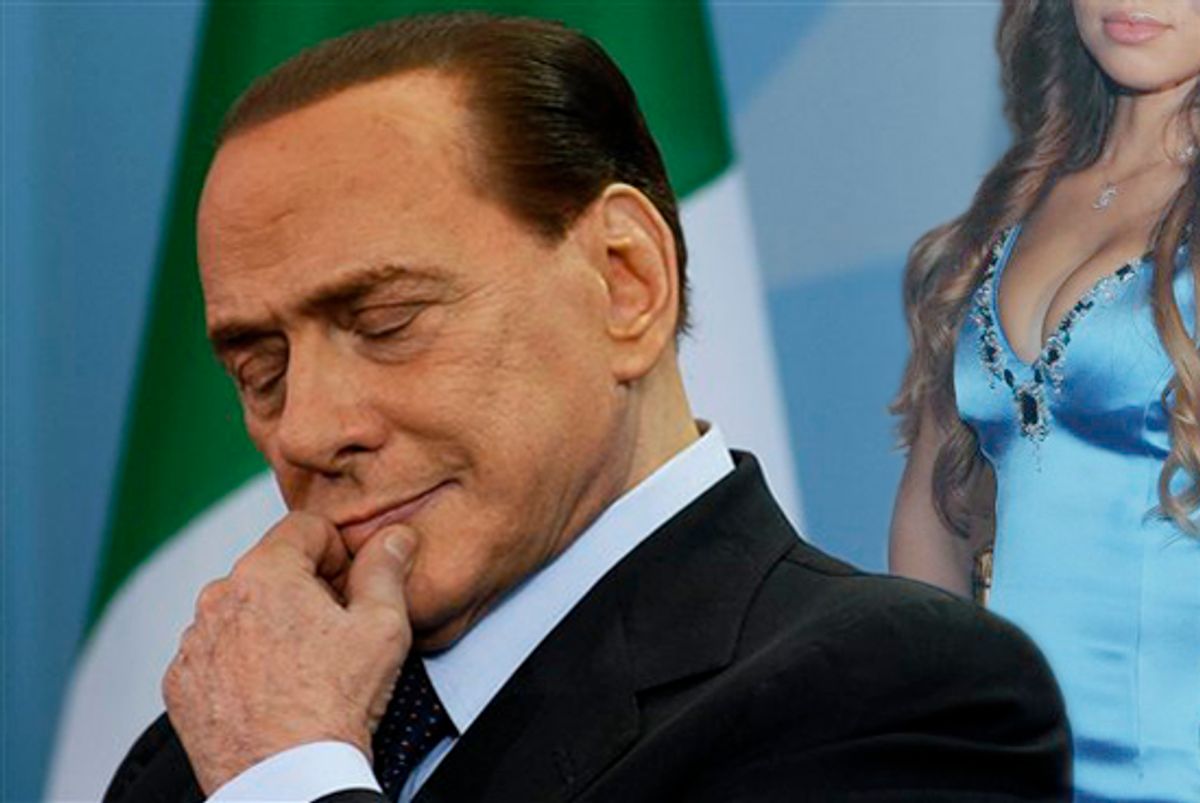 FILE - In this on Wednesday, Jan. 12, 2011 file photo Italian Prime Minister Silvio Berlusconi listens during a joint news conference with German Chancellor Angela Merkel, not pictured, during the 28th government consultations of both nations at the chancellery in Berlin, Germany. Italy's leading newspaper is reporting that Premier Silvio Berlusconi is under investigation in a prostitution case involving a then-17-year-old Moroccan girl. Corriere della Sera reported online Friday, Jan. 14, 2011, that the 74-year-old premier is suspected of abusing his power in trying to cover up his alleged encounters with the girl, nicknamed Ruby. Berlusconi's office said it had no immediate comment. (AP Photo/Shane McMillan, File) (Shane Mcmillan)
--

Silvio Berlusconi sometimes seems more a caricature of political corruption than an actual, flesh-and-blood leader. In years past, authorities have charged the Italian prime minister with bribery, tax evasion, conflicts of interest and even mafia collusion. Each time Berlusconi has evaded conviction, in part by modifying Italy's statute of limitations so that he could effectively wait out criminal investigations. And with every successful evasion, it looked like the Italian people washed their hands of him; the electorate voted him out of office in 1996 and 2006, but he inevitably, defiantly bounced back.

Berlusconi is the third richest man in Italy and the 74th wealthiest person in the world. His personal fortune lies in real estate, his influence cemented through a vice grip on the country's media landscape. His BFF is Vladimir Putin. And he's an alleged sex addict.

The list goes on and on. Currently, the prime minister is under investigation on charges that he paid for sex with an underage prostitute named Ruby the Heart Stealer. The septuagenarian allegedly showered the teenage belly dancer with gifts and cash during many elaborate orgies, colloquially referred to as "bunga bunga" sex parties. The country is up in arms over these latest allegations. The Italian mafia is shopping photographs to further corroborate claims of Berlusconi's misbehavior. And last weekend, protesters lined up outside the prime minister's Milan home armed with condoms to stage a "panty protest." Formal charges are expected any day now.

Ladies and gentlemen, this is the prime minister of Italy.

Alexander Stille is a professor of international journalism at Columbia University and author of the book "The Sack of Rome: How a Beautiful European Country With a Fabled History and a Storied Culture Was Taken Over by a Man Named Silvio Berlusconi." We spoke with Stille recently about Berlusconi, his current conundrum and his impact on Italy.

Berlusconi is being investigated on allegations that he used his power to sweep a teenage prostitution scandal under the rug. How much trouble is Silvio Berlusconi in?

He's in quite a lot of trouble, but he's also in a far stronger position than someone in another country observing these developments would imagine. I think this crisis and this last set of scandals have hurt him a lot, but he has several major assets in his favor. He still has a slender majority in parliament, which essentially means he can continue governing -- although not enough to govern very effectively, so it's created a real crisis in the country. But one of the peculiarities of Berlusconi's type of government is that the majority he has in parliament is an unusually reliable and solid majority because a great many of these people owe everything to him.

So, he has this parliamentary majority on the one hand, and rather incredibly, his public opinion numbers are much better than you might expect for someone who is on his 79th major scandal. And who has been revealed to have cavorted with prostitutes -- minor or adult, 20 at a time in the presidential palace -- with them on his payroll. The poll numbers I saw show that his scandals bumped his approval rating down from 40 to 35 percent. It's not high, but it's actually surprisingly high given the kind of shape he's in. It shows that there's a very solid third of the country that doesn't care what comes out. They're loyal Berlusconi people. They feel that the more dirt that's thrown at him is a sign that he's being persecuted. So they're basically immune to any new information that comes out.

One thing is clear, though: Silvio Berlusconi will not go to jail.

Berlusconi was a very successful businessman before he was prime minister. Was it all on the up and up?

His original fortune was made in real estate and then in television after that. What is interesting is that his career as a businessman has sort of two aspects to it. There's no question that he is a shrewd businessman with a talent for making money, but it's also true that in every field that he's entered, bending or breaking the law and using political connections have been key ingredients to his success. It's not sheer financial brilliance or entrepreneurial genius. For example, in his real estate dealings, the project that he made a lot of his money on was building an enormous gated community outside of Milan, something that had never existed in Italy before that. He bought the land very cheap, partly because the land was right near a major airport and the sound from the airplanes taking off and landing was deafening. Nobody valued the land very much.

So Berlusconi bought and planned this development and then managed to use his political connections in Rome to get the routes of the planes changed so that they no longer took off and landed over his property, but over, in fact, an area he had developed before and already sold off. So those people's lives were ruined, and the value of the land he had bought and was building on quadrupled overnight. So, like I said, political connections and a certain amount of chicanery have always been central to his success. It tells you a lot about him as a politician because a lot of the same themes run through his political life.

What are Berlusconi's politics?

The truth is that when he began his political career, he positioned himself as a kind of an Italian Margaret Thatcher -- a free market businessman à la Ross Perot who was going to come in and take an ossified, bureaucratic, statist society like Italy and make it work and be as successful as his business had been. This was a very attractive promise. And, had he actually followed through on that, it might have been successful.

The problem with that is that Berlusconi isn't a free market person. He's a monopolist. When he got into power, he didn't do any of these reforms to the Italian economy. He didn't liberalize it. Paradoxically, the center-left governments that have been in power have done more to privatize state-owned business and open up markets than he has. Because, the intervention of government in the Italian economy is extremely useful if you want to reward your friends and punish your enemies as a form of political power and control, which is of great interest to Berlusconi. The kind of crony capitalism is the kind of capitalism he grew up in.

Your initial question was "What are his politics?" And, since they're clearly not free market, well then what are they? I think the truth is that Berlusconi's politics are Berlusconi.

It's his deepest conviction that the best thing that could happen to Italy is if they let one man -- Silvio Berlusconi -- control as much as possible. And because he is so smart and generous and good, he will make everything right if they will just give him enough power. He's extremely impatient with and contemptuous of laws, limits, rules, other powers of government, traditional institutions that exercise accountability and control on him or on anyone holding power. So what you have is a constant institutional crisis, where he keeps trying to bend the rules and arrogate more power to himself and institutions pushing back.

I want to take a left turn here for a moment. What are "bunga bunga" parties and what do they have to do with Silvio Berlusconi?

Well, the term "bunga bunga," the origin of it, seems to be in one of Berlusconi's favorite jokes, which also tells you something about his personality. He likes telling this joke, which people have repeated and he's continued to say openly he thinks is very funny -- basically it involves one of his political opponents is captured by a tribe in Africa and they offer him two options. One is being raped through anal penetration, which is "bunga bunga." The other is being beaten up or something. So he takes the second. And they say, "OK, we'll beat him up and then we'll do the bunga bunga to him." That's the punch line to the joke. Berlusconi thinks this is enormously funny, even though most of us would find it offensive and racist.

This is a prime minister who's been accused of embezzlement, tax fraud, false accounting, bribery, teenage prostitution, these crazy sex parties -- basically of abusing his position for power. And yet he's been reelected several times and he's never been convicted. Is Silvio Berlusconi invincible?

He is a very strange character. I do think that until he is physically unable to -- as long as he's drawing breath I think he will be a force on the Italian scene, effectively until they drive a stake in his heart. I don't know about invincible, because he did actually lose two democratic elections -- one in 1996 and one in 2006.

But what I think the Italians didn't understand at all when they allowed him to get into political life without divesting himself of his media holdings is that when you allow a charismatic figure like this who is the richest person in the country and the largest media holder, and he takes hold of the political system, you've created a Frankenstein. It's not a question of ideology, of whether you find him likable or dislikable. It's a concentration of power. I once referred to it as Citizen Kane on steroids.

It's a totally out-of-control phenomenon. Every time he finds himself in trouble, as now, his media empire revs up and begins creating in many cases phony scandals about anybody who dared to criticize Berlusconi. So it becomes, people here have seen what one single network -- yes, I'm thinking of Fox News -- can do if they want to make an issue out of something. You can actually convince people that the Black Panthers and ACORN stole the 2008 election, for instance. It's a total non-story, and there's no evidence behind it. But you can move tens of millions of people into a state of fibrillation about something that didn't happen. Berlusconi has this media empire that is in relative terms much bigger than Fox News, and you can see how powerful that would be when it's mobilized as it is -- particularly in times of emergency like this, in confusing people, printing false stories, making something out of nothing.

They are always creating these false equivalences. The appearance is that other people are doing what Berlusconi is doing, only worse. So you have this media empire that is responding to every single thing but just kind of generating these stories that end up creating an electorate that is unbelievably cynical and confused. They then decide -- because there are all these counter-charges to every charge -- to remove every ethical or moral judgment from political realms.